Composer, chamber musician, violinist, and improviser Todd Reynolds cannot seem to stay away from Texas. This month, he will be leading a group of first-time violinists in Suzanne Bocanegra’s Rerememberer at University of Houston Cynthia Woods Mitchell Center for the Arts’ CounterCurrent Festival 2014 on April 11 at Eldorado Ballroom, at Marfa Live Arts on April 15 and at Fusebox Festival in Austin on April 19 at the Blanton Museum of Art.

While in Houston, Reynolds will also be playing at CounterCurrent’s opening night party with Jonny Rogers AKA Cindertalk on April 9, and the closing party on April 13 with Frode Andersenand and Ejanr Kanding.

Reynolds’ talents are widely known and appreciated by Texas audiences. Most recently, he played in Graham Reynolds’ composition as part of Allison Orr’s PowerUp. He premiered Bill Ryan’s A Simple Place during one of Musiqa’s Loft concerts as part of the Answers to Questions exhibit at Contemporary Museum of Art Houston, and was a featured performer in Ryan’s score for The Secondary Colors, a Karen Stokes Dance project. He is perhaps best known as one of the driving forces behind his group, ETHEL, during its first seven years, and in the early days of his career was the violinist of choice for composers such as Steve Reich, Meredith Monk, and Tan Dun as well as an early member of the Silk Road Project. His self-produced, critically acclaimed and genre-ignoring Innova release, Outerborough, a double CD of both his own music and that of renowned New York composers from the Bang on a Can lineage, climbed to Amazon’s 2011 Best of Classical.

Currently, Reynolds teaches Violin, Electronics, Composition and Improvisation for Performers in universities around the country, is Coordinator of New Music Initiatives at Mannes College, The New School For Music, is on the Contemporary Performance faculty at Manhattan School of Music and in his 12th year teaching, playing and conducting at the Bang on a Can Summer Music Institute. He visited with A + C editor in chief Nancy Wozny on his diverse approach to making music and his weakness for Texas.

Arts + Culture TX: Texas is calling you once again, as you are heading here for the CounterCurrent and Fusebox Festivals along with Marfa Live Arts. I cringed a bit when I read that Rerememberer involved violinists without training, but when I saw that you were leading the pack, I thought, “Oh, well, that’s different, sign me up.” Really, how do you teach people to play the violin in such a short period of time? How do you get music people to relax about this? Todd Reynolds:  “music people”?  relax?  lol.  When making performance art that’s one concern one has to give up. Suzanne’s work is a performance piece, obviously, and its sound world matches a Cage-ian perspective quite nicely. The sound of the loom, the group of 50 “fiddle players,” these are textures, sounds, and they go well together. A highly educated group of 50 would provide an entirely different set of sound possibilities, not better nor worse, but different. How do I teach them?  very quickly.  The key is teaching them to make sound rather than ‘play the violin’. Obviously, I’ve been learning to do that for 46 years straight, and I certainly ain’t done yet!

A + C: When I saw Bocanegra’s piece, When A Priest Marries a Witch (which is part of Fusebox on April 17), I knew she was coming at things at an angle new to me, so I feel more ready for this new piece. Still, how do you teach people to play in an hour? 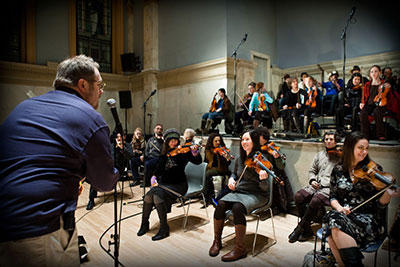 TR: Well, basically. I mean, very basically. I teach them how to hold the bow, how to hold the violin, how to bow open strings (smoothly enough to manage), how to finger a few notes. Then we make some palettes together, which I can recall and modify. What becomes challenging is the combination of  the newly discovered violin technique with memory of conducting symbols. That is a collusion of brain activity that slows things down a bit in the hour. Interestingly enough, however, hive-mind supports it in a way that helps get the job done and has everyone more focused and less self-conscious about the exercise.

A + C: All of us could use more collusions of brain activities, which gets me to the second piece you are involved with in Texas, Mozart Requiem Undead. What exactly will you be doing as part of this project? I like that most of what you do requires a little explanation. I hope you do too!

TR: In this case, Requiem Undead requires less explanation than some other projects we’ve talked about. It is a straight up reimagining of Mozart’s Requiem with multiple composers involved. Graham and Peter offered to us the entire requiem and its component movements. I picked the Dies Irae. I liked the challenge darkness implied therein because, try as I might, I’m never all that successful at writing “dark music”.  It always seems to come out joyful. In any case, I sat down in front of my computer with a full orchestra and chorus at my disposal, and four soloists. I’m looking forward to hearing the whole thing put together.  (And no, it didn’t end up all that dark – again.)

A + C: I’m still getting over the fact that you are not Graham Reynolds’ brother. You were a featured artist in his composition for Allison Orr’s PowerUp, her most recent large scale Forklift Danceworks  project. Can you talk a bit about playing for power trucks and linemen, and how you connected with Graham in the first place? Todd Reynolds performing in Allison Orr’s PowerUp in Austin, with a score by Graham Reynolds.
Photo by Amitava Sarkar.

TR: People ask that question all the time, of course. Is there “a relation”? Not by blood, but I must answer a powerful “yes” in regard to passion and music. Graham and I tell the story of the birth of our friendship slightly differently. Graham will usually state that my CD was one that he particularly noted in a box sent to him by one our mutual labels, I will say that our mutual friend Sxip Shirey coordinated a meeting between us.  Pretty much love at first sight, and we’ve been working together ever since. We’ve found a great compatibility both personally and musically. Graham is as much a foodie as I am, for instance, and we love film and the music which frames it. We’ve both learned and shared a ton with each other.

Graham first awakened me to Allison’s work through Andrew Garrison’s extraordinary documentary Trash Dance, which chronicles her work with the Austin Sanitation Department. We saw it together at its New York showing.  I was entranced. I sort of wished I had known both of them back then, hoping I could have been a part of it in retrospect.

A + C: Just so you know, I’m a Trash Dance groupie, and moderated the sold out shows when the film was here for  Houston Cinema Arts Festival two years ago.

TR: Oh that’s fantastic! Wish I could have been a fly on that wall. When Graham and Allison extended the invitation to be part of PowerUp, I was thrilled. My time working with the linemen, with my old friend Peter Bay, who conducted the orchestra, with Graham’s band, it’s actually hard to grab a highlight, it was just that wonderful. Allison has this magic ability to connect with anyone on a very basic human level, ending up being both a leader and a friend to everyone involved.  Well, maybe it’s not magic, it’s just Allison being Allison, but I learn by watching her just how powerful intention and connection is in building art and community all at one time, and that, to put it succinctly, is her art.  I don’t remember the exact number of people who saw that show, I think above 3,000. Todd Reynolds performing in Allison Orr’s PowerUp in Austin, with a score by Graham Reynolds.
Photo by Amitava Sarkar.

TR: Ah right, it was TWO nights at 3,000.  It brought tears to my eyes watching attention be brought to all those people whose importance, whose work we often take for granted, even neglect. Allison’s work had the effect ascribing to them the relevance and celebration that they deserve. For instance, watching a linemen climb a pole, as an artistic choice, as focused movement, raises its meaning immeasurably.  The accompanying narrative of  “we are here, keeping the lights on, whether you think about it or not” simply morphs how we think of each other.  For me, watching the teamwork, feeling the camaraderie even across five completely different departments within Austin Energy, and being a part of Graham’s huge orchestration, well, it was a singular and meaningful experience.

A + C: This gets me to the idea of collaboration, which I sometimes have mixed feelings about because we toss that word around too much in the arts. Then I moderated that panel at UH during The Secondary Colors residency with you,  Karen Stokes and Bill Ryan. You restored my faith in the process, (and in panel discussions, because for once, it was not a snooze fest). What impressed me so much in your presentation is how nuanced each and every collaboration is for you.

TR: Well, absolutely, every collaboration I choose is the result of a serious amount of reflection and a recognition of resonance both personally and artistically with my potential partner or partners.  I know that collaboration can end up as a buzzword sometimes, but for me it has intense meaning.  It’s more than ‘people doing stuff together’, but rather the creation of something greater than an individual can produce alone, and a result born of relationship and work together.

TR: Yes, I do a lot of my work alone, and, perhaps different from some other of my colleagues, that often translates to lone-ly. Sometimes it’s great to work in solitude, but in truth I would much rather toss about and develop ideas with a colleague than work in my closet. It seems to me to be a natural human desire rather than anything unusual. I know there is a spectrum on which we all exist, though.  Some like working alone much better than in collaborative process. I have also found that too many cooks do indeed spoil the broth on occasion and that politics and egos can figure too powerfully in the mix. When that happens, it is at the least disappointing, or at the most catastrophic to the project. I have only one such instance to contribute in my experience, and it will sadden me always. All other of my collaborations have continued in some form or another to this day and give me great joy, and thrive from expressing the depth and breadth of each collaborator’s personality and artistic intent.