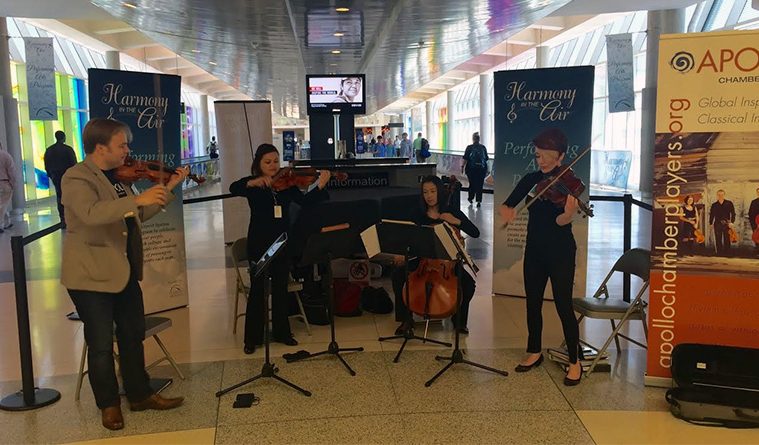 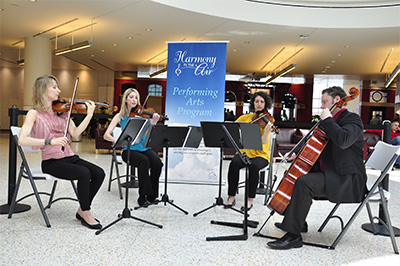 Air travelers nationwide were grumbling about lengthening lines at security checks. A federal transportation official was getting the boot over it that very day. But in the atrium near William P. Hobby Airport’s departure gates, nobody looked stressed.

Instead, people tapped their toes as the Apollo Chamber Players swept through Korobushka, a zesty Russian folk tune. When the string ensemble played a Cuban-style piece, a young woman gave in to the urge to dance. As the three-hour performance unfolded, the crowd sometimes swelled to 20 or 30 people; time and again, passersby pulled out their cellphones and immortalized Apollo via photos or video.

After the group finished Estrellita, a Latin classic, a woman walked up to violinist Matthew Detrick for a quick chat. “I had a horrible morning,” Patricia Hervey said. Her rigmarole had begun in early morning in Dallas-Fort Worth, where her initial flight was canceled; driving to Harlingen, her destination, would’ve taken less time than her rejiggered itinerary. She had just spent an hour listening to Apollo. “Coming off the plane and hearing this music made my day a little better,” Hervey said. “No, it made my day a lot better. I think I can make it now.”

Helping travelers make it is what Harmony in the Air is all about. Launched by the Houston Airport System in June 2015, the program brings Apollo and other Houston-area groups to serenade travelers at Hobby and George Bush Intercontinental Airport. At Hobby, the music greets travelers who have just come through security or disembarked from planes; at Bush, the passengers in Terminal A have the chance for attitude adjustment. 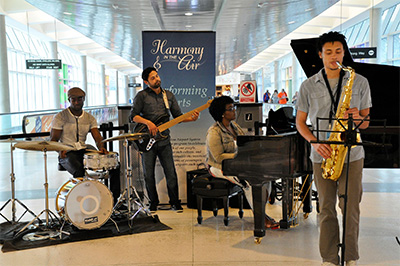 “Travel has become so stressful,” said Maricela Kruseman, who manages the program. She and Mario Diaz, Houston’s aviation director, found an antidote to the irritations during a stop in Barcelona, Spain. They arrived at the airport in early morning, only to face a delay. But a string quartet was playing nearby.

“Sitting down and hearing this string quartet, we had a sensation of, ‘We’re here, we don’t have to worry, and we can listen to this beautiful music,’” Kruseman recalled. “It was this very calm, 18th-century music. I started looking at people, and everybody seemed really relaxed. … (Diaz) said, ‘We should have something like it.’ It was just an idea. But three or four months after that, he really wanted to create this program.”

Then-Mayor Annise Parker supported the program not only as an airport amenity, Kruseman said, but as a showcase for Houston’s cultural groups. Airports in cities such as Seattle, Austin, San Diego and Nashville — which, in keeping with the Music City image, has had a program for 20-plus years — offered examples. Some put the musicians outside the secure zone; some relied on volunteers. But Harmony in the Air opted to put its musicians where they would reward passengers who had come through the security lines. And, in keeping with its arts-showcase role, it decided to pay its performers, thanks to funding from the airport system.

“I want to present musicians who are talented, who are accomplished, who are dependable,” Krusemann said. Harmony in the Air hosted its first musicians in June 2015, and the current roster includes the Apollo Chamber Players, bridging classical and world music; a Solero Flamenco trio; a duo from the Musiqa new-music ensemble; 45 South Jazz; and the Axiom String Quartet from St. Thomas University. Mercury, Ars Lyrica, jazz musician Paul English and Bob Chadwick’s Jazz Trio have performed in previous cycles; English and Chadwick will return in July. 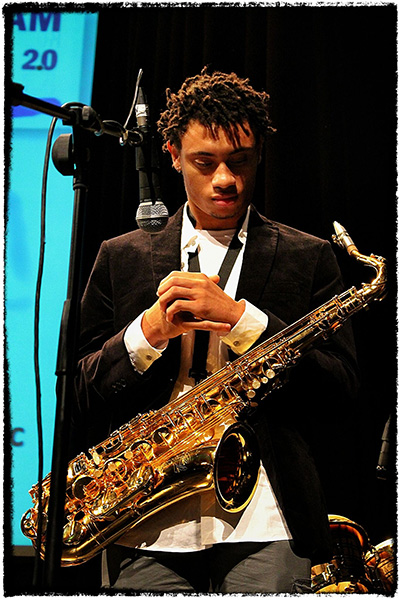 “Houston is obviously famous as an energy capital, for the medical center, and for NASA,” Kruseman says. “But we’re not known for our arts and culture. … We have all these wonderful performing arts organizations, and we’re giving (travelers) a little taste of them.”

Kruseman encourages the performers to interact with the travelers, and the Apollo musicians are all over that. Before they launch into a Joseph Haydn quartet movement, Matthew Dudzik attaches his cello to a strap around his neck so he can escape his chair. The group circles the atrium as they play Haydn’s zippy vignette, and travelers smile as they make room. During Imagenes de Cuba by Rice University’s Arthur Gottschalk, Detrick picks up a shakere, a percussion instrument made of a gourd surrounded by beads. Nearly as soon as he starts accenting the music with it, a woman comes up pushing a baby in a stroller; Detrick strides over and, keeping time with the music, treats the instrument like a rattle for the wide-eyed child. Mom, after sharing a big smile with the baby, aims her phone at Apollo and snaps a photo.

Travelers aren’t the only people noticing Harmony in the Air, said Kathleen Boyd of the airport system’s marketing office. SkyTrax, an international airport-and airline-rating agency, saluted the program as a “fantastic added value” in its recent report on Hobby. The New York Times pointed to Harmony in the Air as one of Bush’s amenities in a user’s guide to U.S. airports.

Even the musicians get a lift, Apollo violist Whitney Bullock said. The group had played a concert on its subscription series the night before, so the four felt draggy as they arrived at the airport. But the enjoyment they gave the travelers reflected back to rejuvenate them. “You think, ‘OK, this is good,’” Bullock said. “’We’re touching people.’”