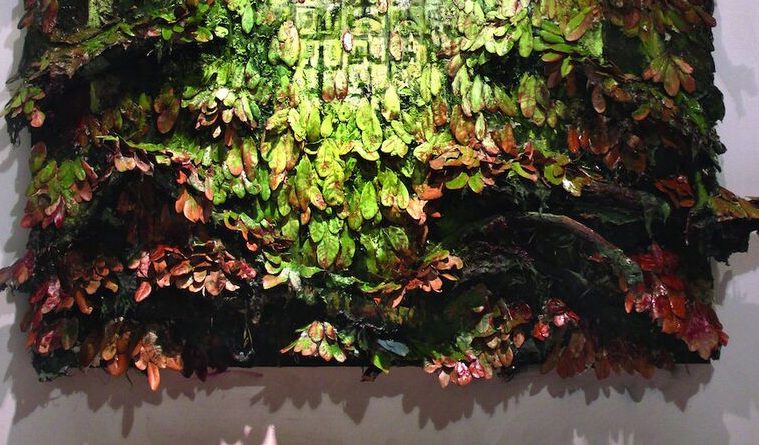 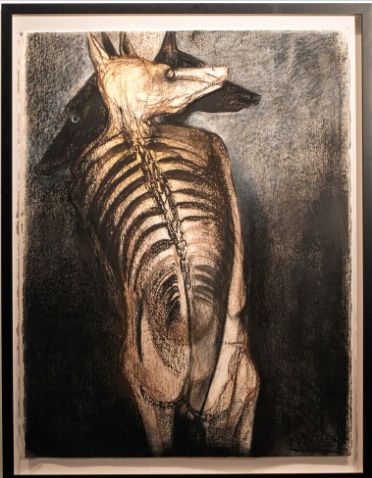 Mysterious, gothic, spiritual, and timeless are the words that come to mind when considering the art of Sharon Kopriva, a Houston native, who has exhibited in Texas and internationally for more than 30 years. This exhibition represents her first solo show with Kirk Hopper Fine Art in Dallas, and was co-organized in conjunction with Deborah Colton Gallery in Houston.  Thirty works of art reside on the walls and floors, and even hang from the ceiling of the gallery, forming one large mixed media installation. A resounding sense of texture informs the work, divided by the artist into four thematic categories referenced in the title of the exhibition.

Her Tubers are rooted in rope sculpture; she recalls, “In the mid-1970s I took a rope sculpture course…it consisted of building undulating abstract forms from a method of connecting coiled rope.”  Recently she brought this technique to the service of creating Earth Mother, a freestanding sculpture, and Lena Tuber, a sculpture suspended from the ceiling. For Earth Mother Kopriva wove the material into a compelling life-size female form that also operates within an abstract register. Earthen in hue with the lower portion resembling soil and roots, the figure also has similarities with fertility symbols like the Venus of Willendorf (2500 BC), shapely and feminine.

The Tails series are inspired by her three Peruvian hairless dogs, and mainly consist of two dimensional drawings and prints.  In the Studies for Cerberus I, II, and III, 2012, the rectilinear profiles of the austere canines are the source for these mixed media depictions of Greek mythology’s guardian to Hades. The heads rest atop a single emaciated humanlike body of skin and bone. Each body, shown recto and verso, contrasts with the profiles and takes center stage in a composition punctuated by an eerie light source illuminating the darkness of the underworld.  In Dusk (2015), the monotype process provides an alternative way to picture the Cerberus myth.  Here, the heads interact with a canine body dead center of the composition, but still in profile.  Kopriva renders incredible texture and abstract shapes and forms through the printing process that give the figures volume. The volume then adds to the figure/ground dichotomy by individuating the figures in what seems like a true space, with foreground and background. An evident dependence on line brings silhouettes to mind as the three backlit heads stare into the darkness. As an art-historical reference, the movement known as Symbolism seems apt, as do the media prints and paintings by the Mexican master Francisco Toledo. 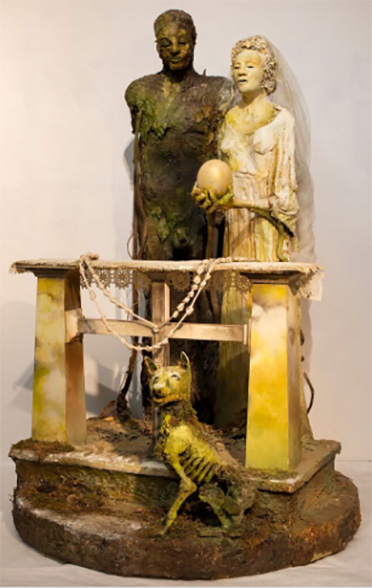 Kopriva completed her first set of Tablets in 1992, a set of fourteen Stations of the Cross, and has continued to make them through an investigation of various themes appropriate to the format. Essentially, a tablet is a small work of art made on tin roofing units that attracted Kopriva with their “arched gothic shape” when she first saw them at the Canton Flea Market. To these tin supports she adds various surreal found objects, sometimes books, and slowly builds a surface. Nine tablets fill a wall as an installation of two rows mounted horizontally, at least two of them include a book opened to reveal the text and combined with roses, small boats, a preserved fish, a heart, and other objects that enter the realm of the uncanny in Kopriva’s hands. They all have a darker hue, with black, dark blue, ochre, and red as the dominant colors, they are a never-ending source of mystery and fascination to anyone who sees them.

Kopriva’s art looks best during the fall and winter months, so the gallery chose the perfect time to mount this exhibition. The scale of the pieces, many life-size and larger, is addressed well in a layout that never comes off as crowded or busy. For fans of the inexplicable and mysterious, where new worlds are forged, this show should not be missed.