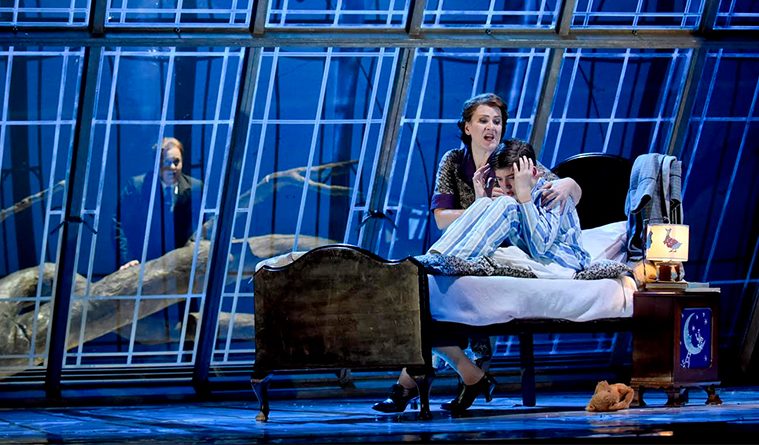 Haunted Melodies: Turn of the Screw at The Dallas Opera

The Dallas Opera production of Turn of the Screw.
Photos by Karen Almond. 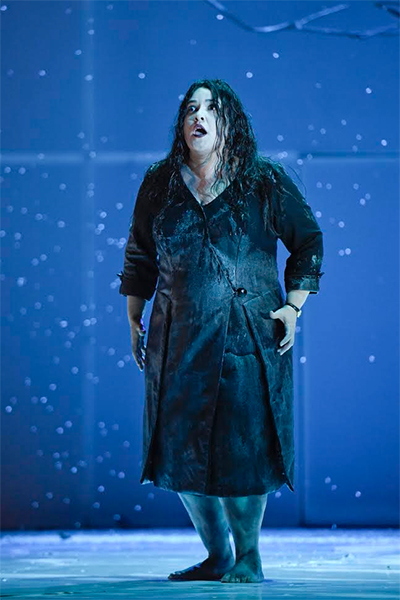 Alexandra LoBianco in Turn of the Screw at Dallas Opera.

Benjamin Britten’s opera Turn of the Screw, which first premiered in 1954, is not simply a retelling of the classic Henry James’ novella but rather a haunting exploration of the corruption of innocence, the supernatural and the descent into madness. This modern opera, performed by The Dallas Opera, through March 25,  intentionally leaves the audience wondering what is real and what is imagined.

Through masterful conducting of thirteen instrumentalists, Principal Guest Conductor Nicole Paiement achieved a profoundly affecting production of Britten’s musical ghost story. Paiement proved adept at building up the tension of each scene, in particular conjuring up a sense of frenzy when the ghosts Quint and Jessel lurk in the beds of the children. The smaller orchestra reinforced the story with pathos and intimacy, performing the opera’s beautiful melodies and its dissonant elements equally well.

Characters drive this opera and soprano Emma Bell made her Dallas debut as the governess.  Her performance struck the perfect balance of vulnerability and strength, rationality and madness.  Her interactions with Miles show the conflicted nature of their relationship.  Bell’s dramatic performance was matched by her crystalline voice which was perfect throughout, hitting every note with restrained emotion.

Mezzo-soprano Dolora Zajick commanded the stage as the housekeeper Mrs. Grose with a voice as firm as her instructions to the children.  Zajick’s hefty voice beautifully complements Bell’s in their duets.

Ashley Emerson’s performance as Flora was well done and her voice was lovely.   Oliver Nathanielsz as Miles revealed a voice as clear as a bell when he sang his aria Malo.  Nathanielsz inhabits the dual character of Miles, sometimes seeming innocent and vulnerable while the next moment appearing sinister as when he reaches out to touch the face of the governess, calling her dear.  His facial expressions can be menacing while his thin body lends vulnerability to his performance. Nathanielsz and Emerson were the epitome of creepy when they sang Bless Ye The Lord as a sort of choir of two. 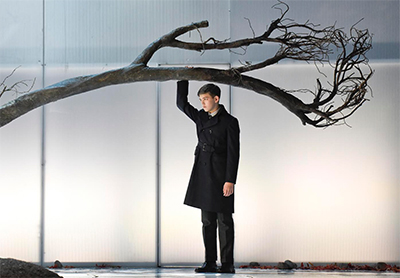 Oliver Nathanielsz in Turn of the Screw at Dallas Opera.

Soprano Alexandra Lobianco sings the role of the tormented soul, Miss Jessel.  Lobianco slinks around the stage, using her body to portray the malevolent victimizer of little Flora and the pathetic victim of the deceiver Quint.  Tenor William Burden as Quint is the perfect villain whose hypnotic power over Miles drives the action of this taut and focused two-hour opera.  As Quint reaches his hands out to Miles and sings his name repeatedly, Burden’s voice is haunting. Burden ably performs a dual role as the Prologue, the unnamed narrator who introduces the story.   The voices of Burden and Lobianco blend well in their duet  ‘the ceremony of innocence is drowned’, a line from the poem Second Coming by W.B. Yeat’s .

Director Francesca Gilpin stressed the ambiguous nature of the story, as well as the characters, making it nearly impossible to define any of them as innocent.  Gilpin skillfully directed the small cast of just six performers to maximum impact.

The stark, minimalist set designed by Paul Brown created a moody atmosphere. The clever use of a glass-paneled frame separated the inside with its chandelier from the outside with a large tree overhead, thus allowing the audience to be at both places at the same time.  At the end of the opera, the same set suggests a cell in a mental asylum.  Visual projections provide a smart way to introduce the children in a home movie during the opera’s prologue.  Lighting designer David Manion enhances the eeriness of the set and his lighting of Miles in the bathtub scene gives him an ethereal glow.