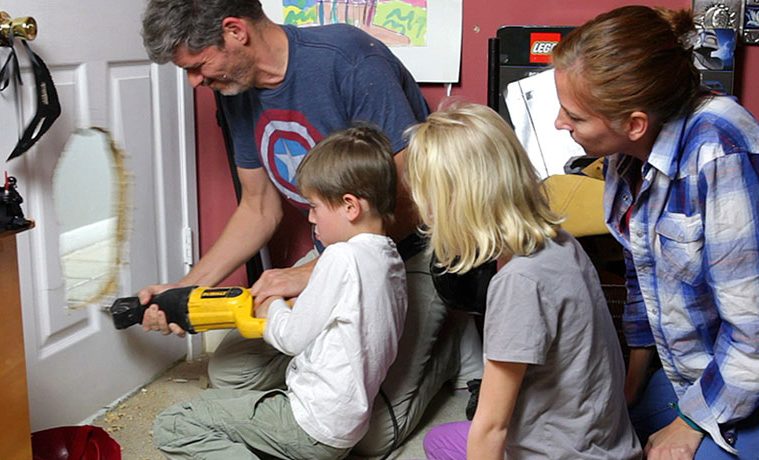 With 13 curators and about 70 artists, the TX 13 Group Survey Exhibition is a cacophony of sounds, images and styles that tries for the first time to jam all the artists selected in a statewide open call for the Texas Biennial into a single space — the Blue Star Contemporary Art Museum. But the huge, rambling former warehouse isn’t big enough, so an overflow of video art fills the nearby University of Texas at San Antonio Satellite Space.

With thoughtful two- and three-dimensional works competing for attention with the raucous soundtracks of multiple videos, the result is a jarring, head-spinning group show that maps the range and energy of contemporary art being made in Texas, but without any real curatorial compass. With few big names, the show belongs to younger, emerging artists.

In the 1970s, Texas regionalism was a raging issue, but for the globalized artists in this show, the issue is pretty much dead — perhaps best symbolized by the newsreel images of a burning Big Tex in a video, Fires, by Dallas artist Michael Morris. Linked by family stories and heat sources, Fires is about the only work in the show that can be easily identified as made-in-Texas.

Otherwise, the art is a grab bag of international conceptual styles that often appear intensely personal while avoiding any trace of politics, except in a few works dealing with au courant gender issues. Adopting an international outlook may save these artists from being labeled provincial, but it means the art is stripped of any regional identity, which makes it look much like what’s being made in New York, Berlin or just about everywhere else in the world now.

Video is the new frontier. The best-produced is Whole by the Houston team of Hillerbrand + Magsamen, which follows a family as they cut holes in walls and doors, crawling through as if trying to escape the cluttered confines of their suburban home. Most unsettling are the gender-bending striptease hipsters in Houston artist Madsen Minax’s smirking (No) Show Girls, marked by the neon Live Nude Genitals sign in the Satellite Space.

San Antonio artist Julia Barbosa Landois sings an anti-love song to Jesus in her music video, Star-Crossed II. The lines projected behind her belong to a traditional Spanish love song, but the English lyrics she sings soon turn into a feminist rant against the religious oppression of women.

The most endearing video is Houston artist Seth Mittag’s Hurricane Allen, which features a crudely animated weather guy giving the bad news on a miniature television sporting foil-wrapped rabbit ears and flanked by a tiny bottle of booze.

Maybe not intentionally, the most annoying video is Austin artist Abinadi Meza’s Melencolia. Using split screens, it shows people watching a soaring space shuttle. A loop plays music rising toward a crescendo that anticipates an explosion, which never happens. But the music is played so loudly it blares across the galleries, making the entire exhibit seem like an exercise in thwarted expectations.

Houston artist Jonathan Leach’s Don’t Let Go, candy-colored acrylic strips on a plastic box jutting out from the wall, is the best of the weakest genre, abstract painting, which suffers the most in the crowded conditions. Sculpture is scant, though Miriam Ellen Ewers of Denton scores with her large-scale horn of plenty, Ideal Shelter, molded in water-based polymer resin. Hundreds of straight pins transform pieces of clothing into torture implements in Dallas artist Gabriel Dawe’s Pain series.

No matter how good the intentions, big group shows are problematic and generally disappointing. It’s impossible to judge an artist by a single work. And the Texas Biennial missed a good opportunity to spread the word about Texas artists, since no catalog was available at the opening and little information is provided about each artist, not even expanded wall labels. Texas art lovers will just have to Google it for themselves.