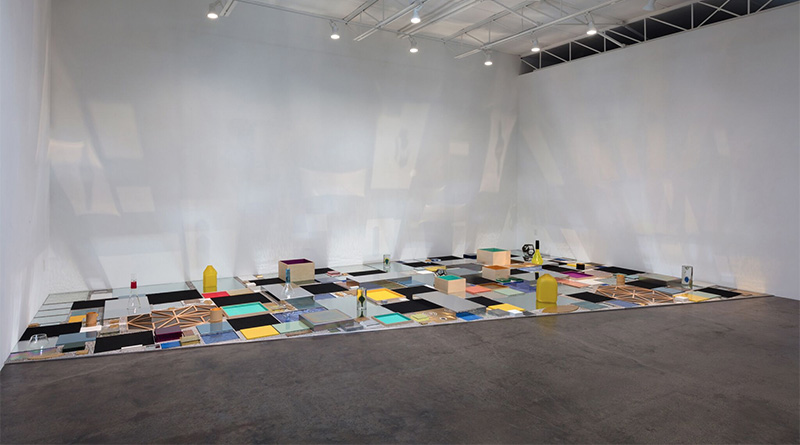 It was a typical hot and muggy Texas day when I made the 45-minute drive from Austin to Elgin. I was on my way to visit artist Margo Sawyer for the second time, almost exactly one year after the first time I had been in her studio. Sawyer was recently named a recipient of the prestigious Guggenheim Fellowship in the Creative Arts, an award meant to help developing scholars and artists engage in research and creation. The fellowship is given to artists who have already demonstrated exceptional production and creativity in the arts, a distinction that can only be used to summarize the more than 30 years of Sawyer’s artistic production, her time as an educator, and her advocacy.

Visiting Sawyer is not just about talking about her work and projects; it is also about being keenly aware of the space she has made in which to be creative—an historic three-story brick storefront originally operated as a local grocery store. The artist converted it into beautifully designed living spaces on the top two floors, and an expansive studio flooded with light and space.

In the studio, it was clear she had been busy. On one side of the room sat a small maquette accompanied by color mock-ups and sketches of a large, site-specific, public sculpture commissioned for the promenade of the United States Embassy in Kosovo. The project has developed into a single, large-scale, translucent hand-painted glass spiral titled Synchronicity Spiral for Kosovo and is being made with Franz Mayer of Munich, Germany (she is also working with Mayer on a commission for the University of Houston). Different shades and hues of color will be hand-painted glass, catching the light and casting off color and light combinations inside and around the piece. From the inside, the spiral will envelop the viewer, creating a space for contemplation. According to Margo, “you can’t not think about Richard Serra with a semi-enclosed circular form, but it’s a space full of color, an inviting, non-threatening, joyous gesture,” she says. The combination of color and light certainly makes it more of an experience with the space rather than an attempt to dominate it.

We sat down at a table in the middle of the room to talk about a private commission she recently finished, working again with Mayer on the hand-painted glass. She was charged with redesigning a chapel’s windows and did so through designing a floor-to-ceiling central hand-painted glass window, a complex process of layered glass. Sacred architecture—specifically the use of color—is a driving force in Sawyer’s work, as is the inspiration she gained during her time living abroad in both Japan and India.

Her vocabulary is translated through the use of light and glass, a medium that she has retained since her days at graduate school. “I had no money when I was at Yale, and I started working with glass because it was free,” she says. “I would go to glass shops and ask for their scraps, then I would cut them into pieces and put those pieces together and make these giant works just out of scraps.” Indeed, it was a decision central to her formation, and as we sat next to each other talking and flipping through images, it was clear that Sawyer had not wavered far from the medium. “I think I’m actually getting more into it, in the sense of color and luminosity.”

In the series Reflect, a site-specific installation recently on view at Holly Johnson Gallery in Dallas, Sawyer used the piece to be a physical reflection of light as well as a career-long work that offered professional reflection. The work combines found and collected objects made of glass, smaller colorful boxes of various sizes, and Japanese pachinko balls filling in the spaces between the glass objects and boxes. The arrangements of the objects changes in every installation to engage with the space, catching the light then reflecting and refracting that light on the walls and the floor, adding even more dimension and depth to the piece and the space.

As we talked, Sawyer explained the subtle intricacies of color and its importance in her work, practice, and personal life. Her parents were a biracial couple in the United States when such relationships were illegal. Her uncle is the prolific Harlem Renaissance painter Aaron Douglas, and her grandfather founded the NAACP in Topeka, Kansas, and was fundamental in the case of Brown v. Board of Education, which altered the course of United States history. Her experience is not just aesthetic but exists in her personal history and has translated into her work in codes only she can decipher.

Our conversation slowly shifted to another massive project. Sawyer also owns a second historical building in Elgin, a block away, one that she purchased with the intention of saving it. The massive structure was also made of brick, characteristic of the downtown historic city of Elgin, where the brick was make locally, including Sawyer’s building.  However, in 2017, Hurricane Harvey had other plans, and the structure was damaged nearly to the point of destruction. Since Harvey, much of her energy has been spent trying to save the building from city demolition (on the day of our studio visit, she had been at yet another meeting with city bureaucracy battling out the fate of the structure). Final plans are still unclear, but the remodel will involve a large installation of glass and color by the artist, and she plans on turning the building into a space centered around art in some capacity. We walked through the site so I could make sense of the enormity of it and of the work ahead of her. Indeed, it is a huge task, but more than anything I could see her drive to save the building for all its history and beauty.

As the enormity of her building project became a reality I knew it was time to say goodbye and let her go about the rest of her day. In that last moment I was reminded of her generosity and history of activism as she reinforced that “we women need to stick together and support one another.” She couldn’t be more right.