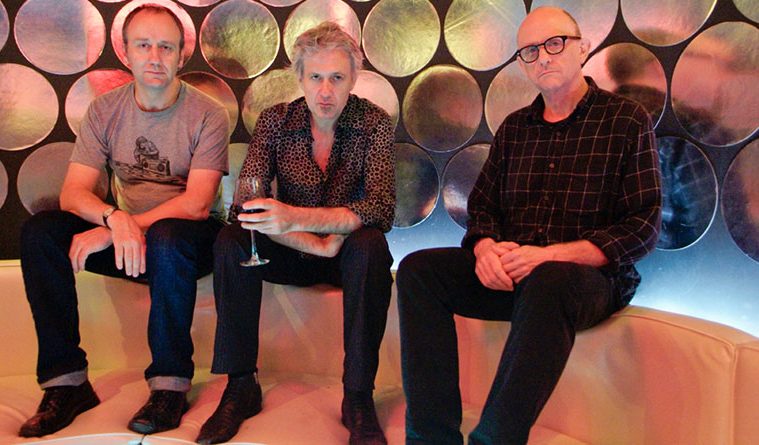 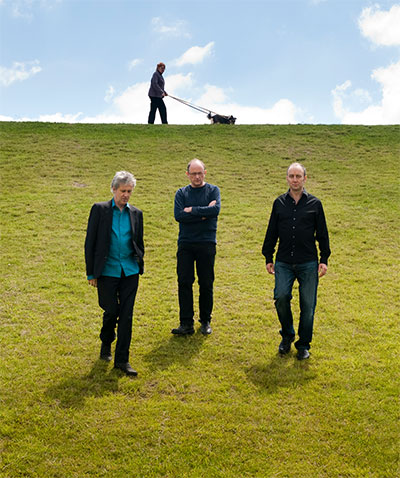 I came on to The Necks late, maybe last year. When I first heard it, I didn’t know what to think. Some of the albums seemed a bit too shiny on the surface, too pretty. As is the case with any band, upon digging deeper into the discography, there’s always more. One of the neat things about that process is hearing a band go through changes in production and finding their sound.  To me, going through it all, The Necks get better over time, more in line with whatever it is I hear as their central focus.

The Necks have some mainstream appeal. Or, they are very listenable, and I’m not sure why. There’s some wisps of post rock, but that’s kind of degrading, because they’re better than a lot of that, so it’s like a grown up older sibling to post rock, less sentimental and predictable, more spectral and focused, avoidant of the mediocre tendencies in “extended”, “repetitive” music. For The Necks, it’s a framework for something more.

There’s groove, but without funk, which is fine by me, because hopefully everyone smoked enough weed and listened to enough Medeski Martin and Wood albums in college. In this funkless but groove-based structure, rhythms and textures evolve over time, adding and dropping one note to the bass line, building a color in the piano part, moving a drum part here and there. I think of sitting in a James Turrell Skyspace noticing that the color has changed but not when or how it changed. It moves at its own pace, unconcerned enough – and maybe that’s the key – to evolve into something worthwhile.

Their latest release, Vertigo, shows the evolution of the band. It’s less tonal, more full of sound and wonderful, sometimes ugly, sounds. Going back and listening to the earliest albums, it sounds completely different, but it’s still theirs. Recommended Records has also recently released an 8 disc boxed set covering the highlights of their career. It’s pretty good.

The band, founded years ago in Australia, is made up of Chris Abrahams on piano, Tony Buck on drums, and Lloyd Swanton on bass. They perform in Austin through  Epistrophy Arts on March 29 at The North Door and in Houston through Nameless Sound on March 30 at the MATCH.  I recently visited with Swanton on what The Necks are all about. 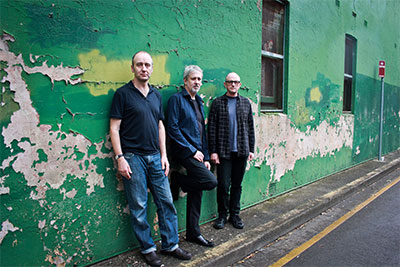 Aside from the length of all the recordings, is there a central idea to The Necks? Or is there something fundamental you are getting at? Is it ever consciously labeled?

We’ve certainly never stated our aims in any sort of dogmatic manifesto, but yes, I do agree there are certain broad connections linking everything that we do:

The notion that we take our time, therefore allowing the music to unfold in an unforced manner. This causes most of our live performances, and album tracks, to clock in at over the 40 minute mark. But that’s not set in stone in any way, it is simply the amount of time we’ve found we require to float a few ideas past the listener, investigate some possibilities, maybe get a bit of a move on at some point (maybe not!), and bring the thing to an unhurried close.

In live performance, the idea of recruiting the sound of the acoustic place within which we’re working, as an active participant in shaping the direction of the music we’re making.

A curiosity about finding new sonorities within our instruments that often involve unorthodox techniques. We have this in common with most free improvisation, but I guess what sets us apart is the frame we build around these experimentations, which somehow makes us a lot more approachable to many listeners who might not consider themselves free improv aficionados. 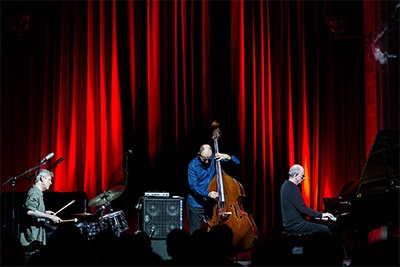 The Necks.
Photo by Alan Murphy.

You have a new album out and last year we saw the release of a box set covering eight other albums. Is there anything interesting you hear listening back to the band’s development?

Definitely, but it’s hard to put it into words. Anyone listening to us, live or on record, from the early days to the present, can hear an evolution. With hindsight, it’s clearly still the same band, but when we released Sex in 1989, there’s no way anyone, us included, could have predicted the sort of areas we get into with Vertigo.

The new album seems to go even further out into pure sound and discordance. To me it covers a lot of ground. (That awesome black metal drone at the end). I don’t even think there’s a single groove. Are you finding new things to explore?

Yes, and I think the moment we feel we’ve run out of puff is the moment we’ll call it a day, but I’m happy to report that after 30 years, our boyish enthusiasm for The Necks’ way of musicking is undiminished.

In another interview you all said that you don’t rehearse pieces, and also that your pieces weren’t “fully improvised.” How improvised are the improvisations?

Well, in the live context, we do have one basic rule, namely that one person starts (though we never preordain who that one person will be). And we have the general consensus in the band that we’re usually going to move things along at our preferred pace, so I feel in those respects we’re not fully improvised. 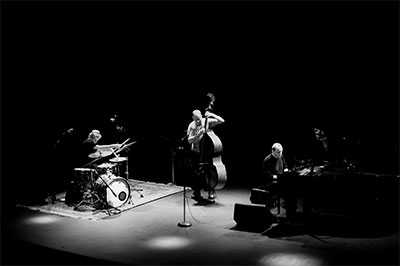 When and how did you all start playing together? Was it a magic sort of click, or did the idea or feeling of The Necks come together over time?

In 1986 we all felt a little dissatisfaction with some aspects of conventional musicking and decided to get together several times a week to pursue some responses we had to that. Initially the notion was one of making music where the only thing that mattered was to be in the moment; the ultimate destination was entirely not a concern. Making music which was all about process, not product. Ironically we’ve ended up with a very easily identifiable product!

One big part of this philosophy was our decision from the outset to never play in public. I think this sets us apart from most other bands! But six months into the workshopping process, when the University of Sydney’s Music Department approached us about performing in an upcoming concert series (because we had been workshopping on their campus and some of the staff had enjoyed listening to our music take shape), we felt sufficiently confident that the presence of an audience wouldn’t inhibit our method. The concert went very well, and now here we are thirty years later, touring the world. Again, ironic.

You’re all musicians active in the “free-improv” world. How does having a consistent band fit in with that and does that experience shape the ongoing work of The Necks?

Yes, we’re all involved in varying degrees; Chris and Tony in particular. As I suggested earlier, The Necks are not “pure” free improvisation, but what we do in that scene definitely informs our work with The Necks. We bring a lot of the concepts we’ve been getting into with other improvisers into The Necks’ framework. I enjoy the creative tension it brings. 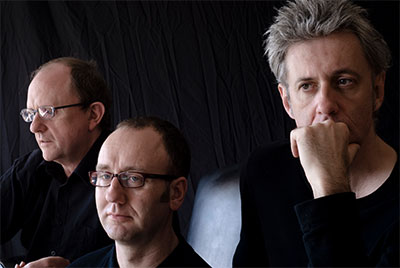 The piano, bass and drums trio has come a long way since Bill Evans. Do you feel there is a legacy or a sense of kinship or tradition with other groups?

Yes and no. We all love that tradition, but we really have moved into some very different areas to what most of the more jazz-located piano trios these days are doing.

Apart from anything else, our physical arrangement on stage is very different to the “classic” trio layout, and I think is an indication of a very different approach to musicking. There is no need for eye contact, so Chris has his back to Tony, and is side-on to me. He feels it puts him more in the centre of the music, rather than six or nine feet away from it. I prefer it too, because in the “classic” setup, where I would be right next to the tip of the piano harp, I often find the piano volume overwhelming. I can get my speaker box in behind Tony’s kit, so he has a good clear line of hearing from me. Most “classic” piano trio are led by the pianist, but there’s no leader in our band, and no compositions, so all the cues are internal within the music. There are messages going back and forth all the time within the group sound we’re creating.

How influential is the space of the performance? Do you have a way of attuning yourselves to the space?

Very. On a prosaic level, we of course listen to the sound of the room at the soundcheck, and each get an idea of what sort of characteristics the room is displaying in conjunction with the PA and the particular instruments (we don’t bring our own instruments on tour). I think what is more interesting creatively is what I referred to at the beginning – our way of actively bringing idiosyncrasies of the acoustic environment into the music we’re making. If any of us start perceiving certain effects being triggered by what we’re doing, we may well choose to focus more intensely on that effect and allow it to become a major theme in the narrative.

We’re very lucky that, theoretically, there’s no such thing as a bad-sounding room for The Necks. We do have our preferences; not too dry, not too reverberant, but it’s extremely liberating making a kind of music which can be insinuated into pretty much any acoustic environment without compromise.