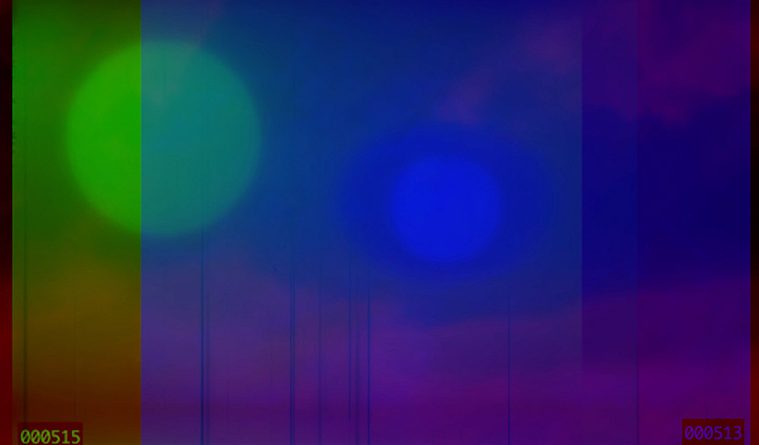 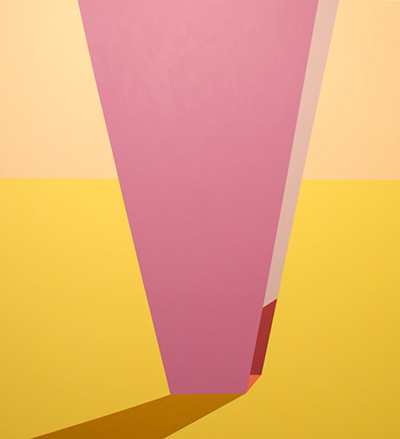 Depending on one’s frame of mind, the new exhibitions on view through July 16 at San Antonio’s Southwest School of Art—created by three very different artists in three divergent mediums—offer either hopeful or apocalyptic visions of landscapes. In each, evidence of humanity is marginal or vestigial, as though artists Esteban Delgado, Tom Turner, and Victor Pérez-Rul have carried the timeline forward to the next possible, logical conclusion—a post-human vista.

Apocalyptic visions are nothing new. From Medieval Last Judgement reliefs to the gore-splattered hellscape of The Walking Dead, creative minds have fleshed out the details of our ultimate, perhaps deserved, demise. But with today’s unhinged political climate, world events seem to be lurching us daily toward possible destruction in the form of resurrected nuclear threats or global climate disaster. The issue of the “end of days” (or at least the end of the era of American dominance) seems especially germane. These exhibitions fast-forward past the chaos, presenting the calm after the proverbial storm, the silent beauty of an unpeopled landscape.

It is worth noting that Tom Turner’s Color Atomic video pieces are derived from U.S. government footage of nuclear tests in the past. These mid-century visual echoes of the Cold War era resound differently in the Trump era, when we are bombarded with daily news reports of North Korea’s latest capabilities. Turner maintains and even increases the viewer’s distance from the violent atomic rending, applying a painter’s touch by saturating the color to hallucinatory levels.  His searing palette along with the slow transition of the images make them oddly hypnotic, as though the impending nuclear holocaust would be a gorgeous light show if seen from afar. Color communicates the toxicity and pervasiveness of radiation in a way that the videos in their original form do not, but the superhuman scale to which Turner alludes is never quite achieved in his installation. A bank of three screens, Operation Dominic – Housatonic 02, Operation Teapot -Turk, and Operation Plumbbob – Rainier allude to the vastness more clearly in their combination, but solo videos are a little too contained to inspire the type of glorious horror to which Turner aspires.

In Plural Forms, Esteban Delgado merely hints at scenery. Where the paintings are most dynamic, they employ the bare minimum tricks of linear perspective to indicate distance. In Going Home, the allusion to dimension is subtle enough that the viewer is able to question its implication in other works, such as Dragnet. It’s a delightful kind of game that Delgado sets up, with the viewer trying to orient within the picture’s space, only to be jettisoned from the canvas by an unexpected triangle of violet-tinged pink, as in Forcing. In these landscapes the population is one—the viewer. Delgado pulls us in with his freshest contribution—his utterly unique sense of color—and pushes us (sometimes literally) out in Climbing to Panoply, a mural that spills it’s colorful shards onto the gallery floor. While speaking the familiar aesthetic language of geometric abstraction, the paintings provide a poignant parallel to the harsh but beautiful panoramas of an unforgiving land. 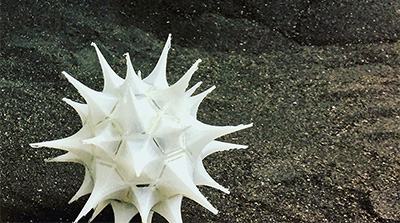 Of the three purveyors of unpopulated terrain, Victor Pérez-Rul’s The Odds is the riskiest proposition, with works that range from sublime to stage-y. The Odds is set up in the manner of a natural history museum diorama, which leads us via a path carved through dunes of glittering black sand. It’s as though we have crash-landed and washed up on some alien shore, peppered with objects that may or may not suggest human life. In some particularly satisfying instances, the line between “made” and “found” is entirely obscured. Crystal 02-04, the skull of a cow gilded with an iridescent material, is an especially beautiful/creepy object. Another standout is Arqueologías Futuras, a trapped-in-amber (resin) Nokia cell phone. When Pérez-Rul uses installation to enhance the mysterious provenance of his sculptures, they are fascinating.  However, some sculptures in the exhibit have received the traditional pedestal treatment, leading to an unnecessary hierarchy among the works. Those that are meant to be viewed with detached inspection—as is (dis)order landscape, a translucent block that looks like a ghostly topographical cross section—are on pristine pedestals, and those that are meant to be “happened upon” are among the intentional detritus of the installation. This kind of preparatory fence-sitting leads viewers to question the artist’s own estimation of these individual works.  Are they discoverable jewels within a wasted, glittering environment, or do they represent self-contained universes of meaning? Consistency in how we navigate these objects would contribute greatly to our experience of them.

The artists in the Southwest School’s current exhibition series are providing three visions of what a world without us might look like. Humans have always wondered at this possibility, but this particular moment in history seems to be providing us with a soberingly clear vision of how that may unfold. Whatever the draw, we are pulled toward artistic glimpses of that (hopefully) distant day. In this case, it may be the end of the world as we know it, but the world will be fine.