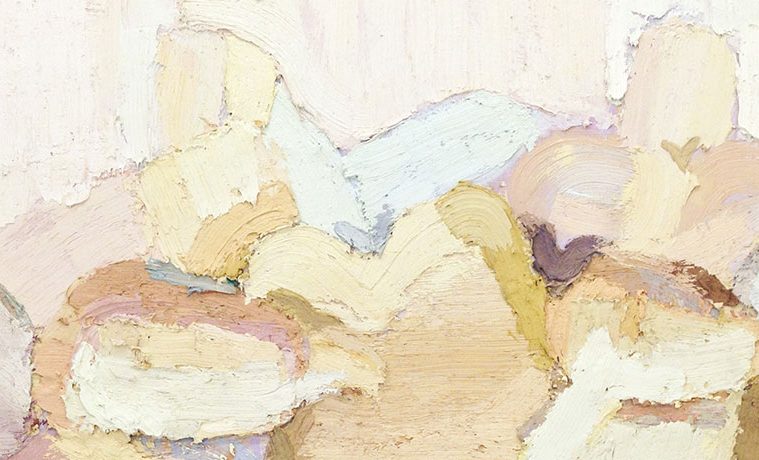 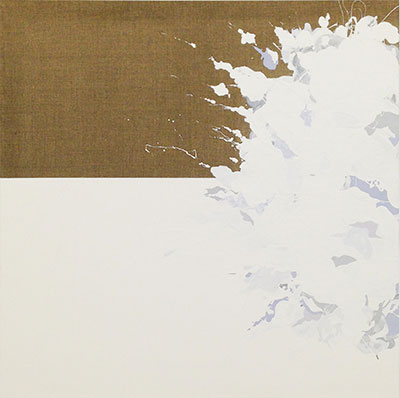 Much of Kirsten Macy’s polished work was created for her 2013 solo exhibition Feels Like Forever at Barry Whistler Gallery in Dallas. Counterbalancing geometric shapes with controlled splatter-bursts or materials such as enamel with natural linen, Macy’s paintings play up tensions between the natural and synthetic. Seemingly formulaic, Macy created the images as a form of automatic meditation in response to a life-altering car crash. Macy’s control and the paintings’ sense of forced serenity suggest an internal struggle.

The paintings of Ludwig Schwarz in this exhibition are markedly different from his pattern-based compositions, instead focusing on fading earth tones and slow curves. These images can be viewed as being cropped from or subsets of a larger ideal image. Although Schwarz’s paintings are not conceptually indebted to the color-field painters of the mid-twentieth century, the similarity is jarringly uncanny.

Jamie Davis is the only artist in the exhibition working on paper and the only based in Houston. (We exhibited together in 2012.) Markedly sparse, Davis’ drawings of nearly-invisible text and unfinished graph paper are as much about spatial relations as they are about the practice of drawing. The minimal tendency is a departure from her previous narrative forms, but still maintains a fascination with pattern. 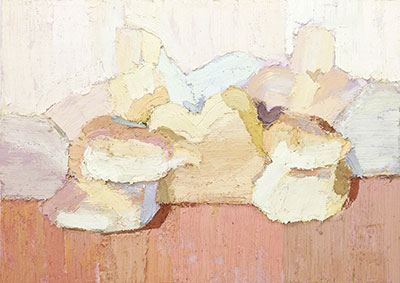 Michael Villareal
Amass
Oil on panel.
Courtesy of the artist and Art Palace.

The exhibition can be viewed through strictly formal eyes, but the images don’t lose themselves to austerity. Proprietor Arturo Palacios used a light touch in presenting the exhibition, which easily could have succumbed to over-curation and forced “dialogues”. Instead, Wabi Sabi offers a pause from hurried immediacy, with delicate images that slowly reveal more of themselves the longer you look.