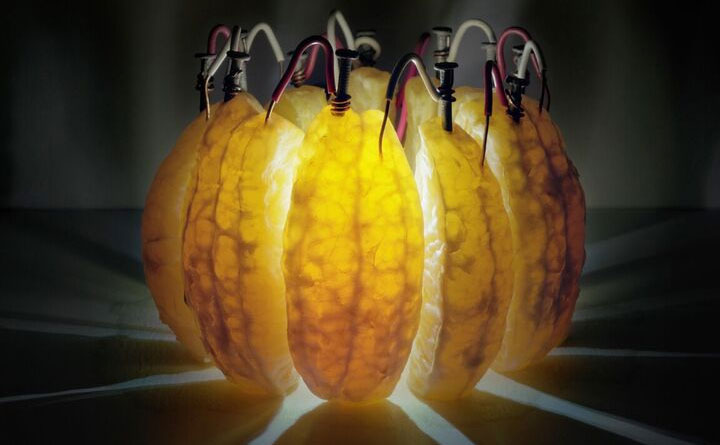 What Light Leaves behind, Caleb Charland: Shadows of the First Law at Capsule Gallery 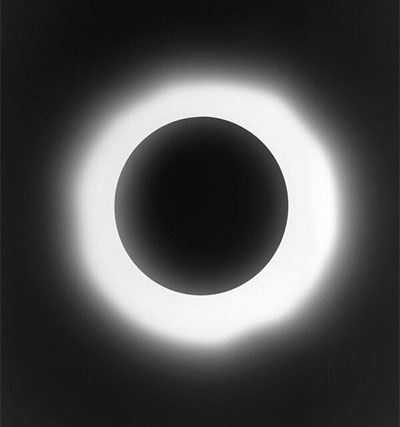 Capsule Gallery is offering a broad sampling of Caleb Charland’s body of work (through April 2), drawing in a wide variety of his experiments. His work — some photograms, others photographs, but all interesting– does not just capture images of the visual world: Charland’s work is a diverse exploration of the processes of creating and capturing light, often the result of extended exposures to record that which we may not normally perceive. His attention to physical effects, and in some cases processing and reprocessing the photographic artifact, yields some arresting results.

The work here includes: Penumbra series – what look like solar eclipses are actually candle eclipses – as candles placed on photographic paper burn down gradually over time, the light creates a penumbra glow of light. The smooth gradations between the illumination and shadow produce distinct, glowing images, just as each solar eclipse is unique. 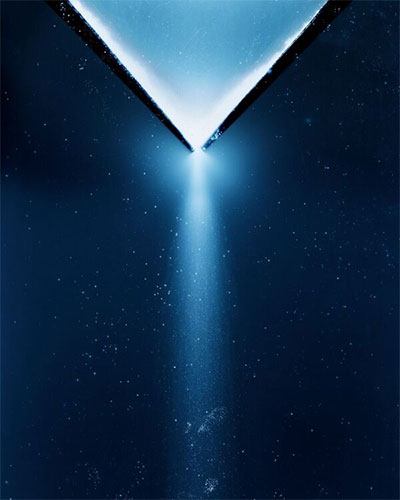 Battery series, in which applying the principles of electrochemical batteries to the subject of the image (fruit), with again, extended exposure times (all night long, in some cases) captures the extremely low level of illumination produced by the current of the subjects themselves, fruit. There is a significant back-story to these productions that entail both the batteries as well as the illuminated subjects that become the images – note the translucent Orange Battery, illuminated by the electrical current from the object itself, expressed through halogen lights illuminated from within the object itself.

The Theory of Shadows series are more traditional photograms, in which meticulously planned geometric shapes are added or removed from the photographic paper between flashes of overhead light, which yields projected parallelism or glowing light within imputed three dimensional objects.

Pouring Light #2 is made by pouring glow in the dark particles across a sheet of large format film.  The accumulated paths of glowing beads record a glowing pattern of literally poured light. 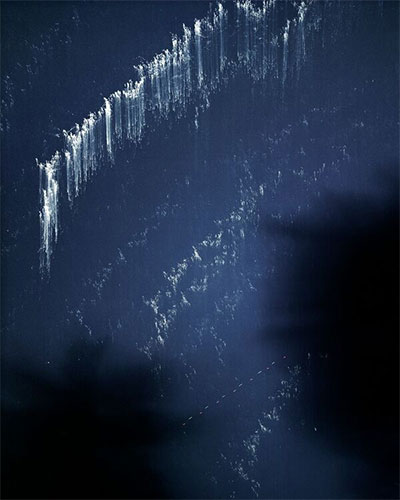 His pendulum series explores the intersection of physics and chemistry in a visceral way. By swinging a burning red candle over sheets of photographic paper, Charland renders the physical artifacts of repetitive swings of the candle light, blocked on the underlying paper by drips of red wax – a key factor that then blocks the light of subsequent swings of the candle pendulum. The prints are subsequently processes and reprocessed through dilute development cycles, during which the wax is eventually expelled, revealing the physical residue of the gradual exposure and development effects. The result reminds one of Muybridge’s stop-motion images (a noted influence for Charland), but revealed in an inverse manner: rather than through sequential time-based exposures, Charland uses extended, repetitive and diverse physical and chemical processes.

His Solar Plexus #20, an extended view camera exposure, captured on his chest for over two hours on a clear night, records not only the track of stars across the night sky, but also the rhythms of his breathing cycle. The effect is something akin to an astronomical musical staff and a clever exploration of the interaction of light and mechanical processes both celestial and human.