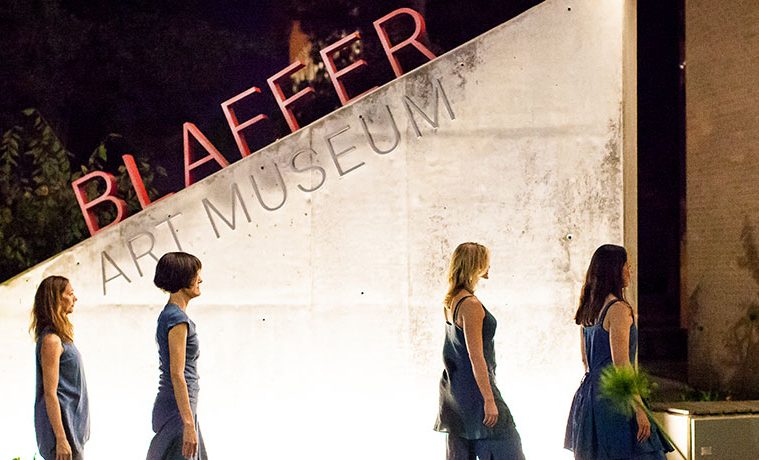 When a Building Dances 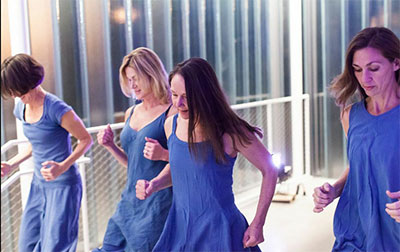 It wasn’t a hostile takeover of the space, but it certainly opened on a rather austere note. The audience, positioned outside in chairs in the middle of the street on a chilly night, had pedestrians wondering what in the world was going on. The blue glow of the Blaffer, an homage to the Rothko Chapel, deepened the surreal feel. 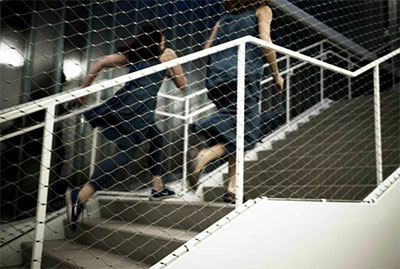 Divided into two sections, 021 Urban Songline, offered a study in contrasts. We watched the first section from outside looking into the building. Performed in a stony silence, the building took on an otherworldly cast. Colored lights projected on the front of the building added to the mysterious atmosphere. We were outside, they were inside. The building itself became the filter through which we viewed the piece. The division was clear. The opening sequence, where the dancers simply walked toward toward the large windows on the second floor, provided a rather ominous, slightly haunting, beginning.

From there, they began to inhabit the staircase. Their movements were further obscured from view due to the frosted glass windows. A ghostly effect prevailed for much of this first section, until they moved onto the ground floor, where they lightened up, let down their modern dance 101 guard and enlisted more gestural action. The first part played out in broad strokes, simple movement choices, taking into account the rather dynamic architecture of the building and the framing of the front windows. The strong diagonal of the building’s facade also added punch, containing the straightforward directionality of the dancers’ choices. 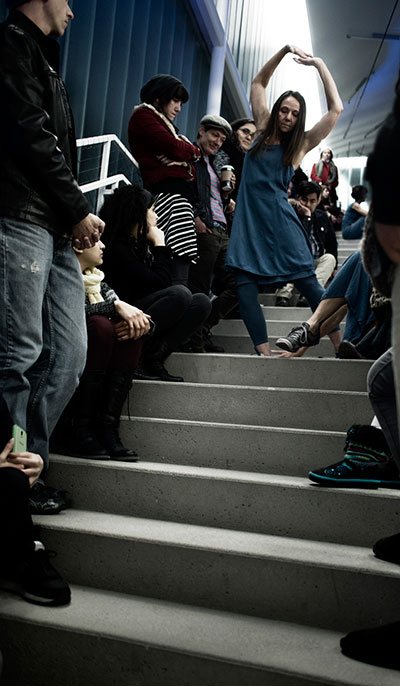 Things got more dense and tense during the second half when the audience was invited into the space and onto the stairway. The dancers had to navigate a staircase lined with people on either side, which they did a determined intensity. Allard van Hoorn recorded the dancers’ footsteps, vocal commands and comments, some harmonizing tone vocals and the physical sounds of the movement sequences, which where later fed into computer  to create the sonic environment for the inside section. So we end up with a kind of replication happening here, the dancers played the building, and then became the raw material for the sound score.

Now we shared the building, we were close to the dancers, invited into their space, their drama, their antics and their process. Using a movement score created by Scates culled from the first section, the team played with rhythm, the building’s boundaries as well as the relationship between them, often getting very close to the audience. Words and commands, such as build, move, don’t move, and stop moving, popped out from time to time, functioning as a cueing system and another layer to the sound score.

They are a savvy team of moving masters, so the exciting part was watching the cueing and movement decisions happening on the spot. I wonder what would have happened if they had let the audience roam among them, it could be fun or havoc. My favorite sequence had the always watchable Scates walking down the stairs backwards as if to draw her team to a conclusion and hand the building back over to the Blaffer. 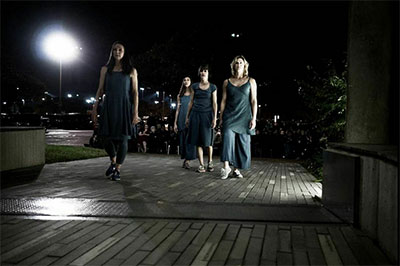 Dancing outside of black boxes comes with challenges, yet when you consider how interesting some of these spaces can be, Blaffer included, and how simply great it is to see highly trained dancers moving within this elegant building, it’s worth watching dancers move in sturdy sneakers. It’s also a much more public way to view dance. Including dance as part of Buildering also seemed like a wise extension of the exhibit, as site specific dance has a long and storied history, and is the dance field’s response to buildering. Dance leaking out to public spaces, especially when it’s done by such a smart group of movers, is always a good idea. 021 Urban Songline turned the Blaffer into a music and dance box.

Reprinted with permission from Dance Source Houston’s The Dance DiSH.