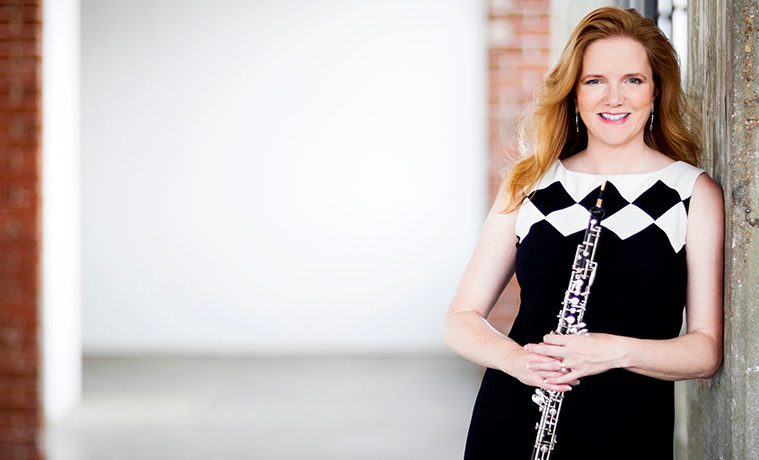 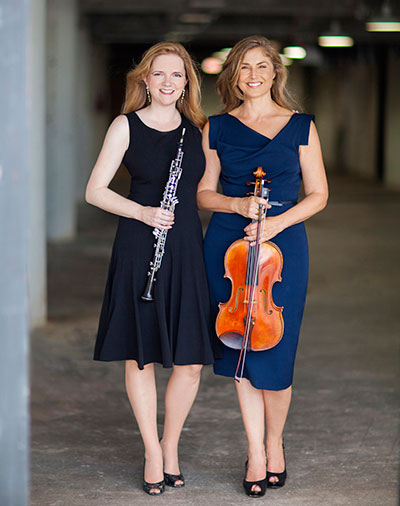 “We’ve gone from being ‘Alecia’s experiment’ to a core cultural asset,” says Lawyer, pausing to let that strange and wondrous idea sink in. “Now we just have to let the world know. The sky’s the limit for whatever we do next.”

However you measure it, the 40-piece group that originally billed itself as the River Oaks Chamber Orchestra and evolved into ROCO in order to be more inclusive has become a major Houston success story. In terms of performances, it gives between 35 and 40 concerts a year, some with the full orchestra and others with a wild assortment of smaller, occasionally downright quirky ensembles.

In terms of venues, ROCO has played classical musical virtually anywhere that hasn’t played it first, from the Church of St. John the Divine to the Lawndale Arts Center to the Holocaust Museum to the Houston Zoo. And in terms of funding—the final frontier for any arts organization—it has cobbled together an innovative model that uses fundraising and sponsorshipsto involve its musicians in the lives of its donors. Yes, insists Lawyer, in a meaningful way. And yes, trotting out one of her favorite words, in an authentic way.

“Traditionally, arts organizations were very transactional,” she explains, every perky inch and ounce a new-style arts visionary. “We had a product and we wanted you to buy it. ROCO is relational instead. If I see you in the audience and you’re smiling” —she can barely suppress a giggle—“then I’m taking you out for coffee the next day and asking you for money. See, relational: Not transactional. There are a lot of ways and places you can enter a relationship with ROCO.”

All this is pretty heady stuff, even for someone named a finalist for Texas Musician of the Year (along with Willie Nelson, no less), listed as one of Houston’s Top 50 Most Influential Women, and who has been invited to speak at universities and music conservatories all over the country on the Texas-sized topic of “Wildcatting in the Arts.” In these talks, she uses ROCO as a case study for what she calls “community-specific orchestra building.” 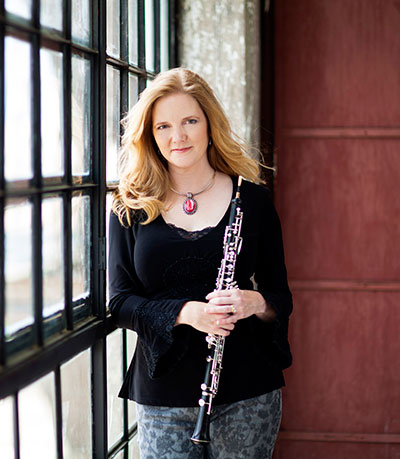 This is an important year for Lawyer in another way as well. In addition to seeing her “child” celebrate a big birthday, she can begin to sit back and watch others take over specific tasks she once handled on her own. ROCO now has an executive director named James Rowland, a development director named Christine Stevens and even an associate artistic director named Suzanne LeFevre.

Having played viola with ROCO from the beginning, Wisconsin-born LeFevre is using her earlier experience as company personnel director in her new and expanded role, homing in on the smaller-ensemble schedule. But she insists that she and Lawyer talk so many times each day that there’s really no limit to what they can and do talk about.

“We always ask our musicians for suggestions,” says LeFevre. “We ask if there’s anything they want to play. We take pride in the chamber series in doing music you’ve probably never heard before. The idea is spreading the love, allowing everybody the opportunity to put themselves out there.”

The list of ROCO’S unique attributes, or at least its totally interesting stuff, goes on and on. For one thing, Lawyer and Co. decided early on to pay musicians a decent wage,  to convince them these performances weren’t “just a gig.” For another, they envisioned a constellation (or a LEGO project, says Lawyer, the mother of two boys) of small groups playing concerts anyplace that made sense, all coming together for the full-orchestra performances, mostly at St. John the Divine. For yet another: While everyone involved with ROCO embraces the thrill of live performance, they make all these live performances, with additional royalties paid to composers, available with a click on the ROCO website.

They’ve also developed a program for youngsters called ROCOrooters, combining the better aspects of childcare and basic, age-appropriate music appreciation of the sort that used to be taught in public schools or featured on network television via celebrities like Leonard Bernstein and Danny Kaye. The end result: kids have someplace nice to be while their parents take in a ROCO performance. The motto: “Saving marriages one concert at a time.” 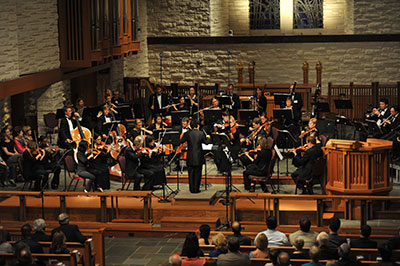 This unusual orchestra-with-an-unusual-attitude has tended to attract (well, actually, it’s more like select) what once would have been considered unusual musicians. The ROCO dream team is made up of people who are first-rate on their chosen instruments, yet who also can augment the company’s mission by bringing personality to each concert, as appropriate to the music. In addition, since each musician is sponsored financially by an individual or group, he or she must be adept at genuinely appreciating the support. Not everybody who plays an instrument can navigate such up-close-and-personal waters. Yet that is where, more than anywhere else, the survival and success of ROCO have been achieved.

“It started as a ‘Why Not’ orchestra,” Lawyer offers. “It has become a gathering of the highest-level musicians who are very open, vulnerable and joyful on stage.”

The 10th anniversary season is packed with the sort of talking points the company’s founder adores. How about nine world-premiere commissions (pushing the overall count past 40), an entirely new concert series, the appropriate rebranding of ROCO chamber as ROCO unchambered, and a homecoming of sorts for several of its favorite musicians and collaborators. Though some years have come and gone without an overarching theme, this year cried out for something grand and literary. Something like the name it ended up with: Great Expectations.

Four premiere compositions for the full orchestra sit comfortably under this Dickensian umbrella, starting with a new piece by Maria Newman based on the children’s book The Miraculous Journey of Edward Tulane. You might say composition runs in her blood, being the daughter of multiple Academy Award-winning composer and conductor Alfred Newman, sister to Thomas Newman and cousin to Randy Newman. In addition to composing classical music to considerable acclaim, Newman excels as a violinist, violist and pianist. This season-opening concert, to be given Sept. 27, also features music from Rossini’s Italian in Algiers, Mozart’s Symphony No. 41 (Jupiter) and Britten’s Suite on English Folk Tunes.

Movies also play a role in Anthony DiLorenzo’s career. Before taking on a ROCO commission for Jabberwocky based on the Lewis Carroll poem, he created the music for more than 80 film trailers, including one for Toy Story.  Premiering on Nov. 8, Jabberwocky is on a program that also showcases Beethoven’s Piano Concerto No. 1, Mendelssohn’s overture The Fair Melusina and Williams’ Overture to the Wasps.

The Feb. 13 and 14 “conductorless” shows, titled Mutual Affection with a nod to Valentine’s Day, feature a world premiere composition by Derek Bermel, commissioned in partnership with the New Century Chamber Orchestra in San Francisco and A Far Cry in Boston.  Such collaborations, be it with other Houston arts organizations, with interesting venues throughout the metro area or with other like-minded chamber music groups, are one of the secrets to the schedule ROCO is able to keep. So is the sort of savvy programming that pairs Bermel’s “something new” with Schubert’s Symphony No. 5, Elgar’s Salut d’Amour and Dvorak’s Romance for String and Orchestra.

The full-orchestra season comes to an end April 23 with a world premiere by Pierre Jalbert inspired by the profoundly American (but also profoundly different) poems of Walt Whitman and Stephen Foster. Jalbert is a professor of composition and theory at the Shepherd School of Music and one of the artistic directors of the contemporary music ensemble called Musiqa. For this concert, titled “Notes to be Written,” mezzo soprano Sasha Cooke becomes part of the ROCO experience, joining other fine musicians and vocalists from around the country, including violinist Brian Lewis, pianist Anne-Marie McDermott and soloist Cho-Liang Lin.

The remaining parts of the season, diverse and distinguished as it is, fall under one of the small-ensemble categories. ROCO Unchambered, in a new venue called The Vanderbilt patterned after New York’s Grand Central Station, explores musical genres in relation to chamber music and the collaborations that make all such things possible. ROCO is also continuing its partnership with Bayou Bend for a Yuletide Concert, as well as with the Houston Zoo for three family-style performances of Peter and the Wolf. The Oct. 28 program titled “Musical and Literary Ofrenda” is a celebration of Mexico’s Dia de los Muertos tradition, serving up five original compositions and three literary creations by Inprint.

Perhaps most fascinating of the small concerts, or certainly least expected, is a tribute to jazz singer Billie Holiday in honor of her 100th birthday. The first installment of a new series called ROCO Limited Engagement, the March 26 show welcomes both New Orleans jazz vocalist Stephanie Jordan and a rhythm section to make the classical and jazz music that embodies the music of Holiday’s colorful era.

There is one additional ROCO Limited Engagement concert scheduled in the Rothko Chapel on May 21, and it promises to be quite moving. There, amid the somber (or, others insist, liberatingly joyous) tones of Mark Rothko’s late paintings, a 13-piece ROCO orchestra will perform a special and specific arrangement of Mahler’s Symphony No. 4. As the season’s final concert, the Rothko event is intended to reflect upon the group’s past achievements while gazing ahead with excitement toward its future.

“We’re always looking for authentic relationships with our audiences,” Lawyer says by way of summing up. Then she lets herself smile. “People in ROCO are people you really want to have a glass of wine with.”