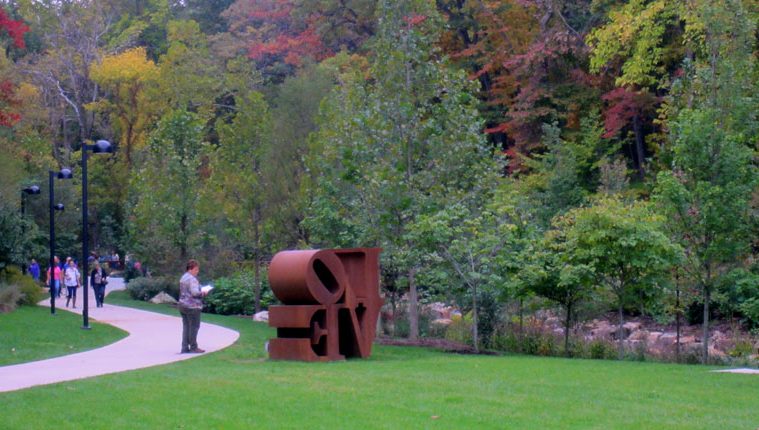 Worth the Trip: Crystal Bridges Museum of American Art

I didn’t get around to making the pilgrimage to the Crystal Bridges Museum of American Art – the Bentonville, Arkansas, institution founded by Walmart heiress and collector Alice Walton that opened just shy of a year ago – until mid-October, when it launched its new exhibitions. So I can’t give you the lowdown on which permanent-collection galleries have been rehung or which works have been rotated in or out of view.

But the locals can, judging from conversations I overheard in the impressive crowd of fellow visitors whose accents suggested they hadn’t traveled far. Rarely –  too rarely – in big-city museums do I hear someone saying “that Marsden Hartley wasn’t here last time,” but I got used to hearing variations on that theme over and over again at Crystal Bridges, which many people were revisiting to take stock of their museum’s progress. (Facilitating those repeat visits, admission is free, courtesy of Walmart.)

That experience, which gibed anecdotally with Real Clear Arts blogger Judith H. Dobrzynski’s recent report that Crystal Bridges surpassed 500,000 visitors in late August – less than 10 full months after it opened – and that two-thirds of them came from within the region, was enough to make me a Crystal Bridges fan.

So was its collection, which is most impressive in works dating between the colonial era and the early 20th century – strengths include works by Gilbert Stuart, Martin Johnson Heade, Asher Durand, Thomas Eakins, Hartley, Arthur Dove and Stuart Davis – although the museum is still playing catch-up with art made since World War II. (This isn’t an entirely bad thing; a dearth of major works by the big names makes room for interesting contributions from less-exhibited artists such as Janet Sobel, Grace Hartigan, Leon Polk Smith and Gene Davis.)

Apart from delivering on Walton’s dream of sharing an important American art collection with a part of the country that has few museums, Crystal Bridges succeeds most profoundly in its integration of art, architecture and landscape. The Moshe Safdie-designed building, which is divided into pavilions connected by open spaces that overlook the surrounding forest and museum ponds fed by a nearby natural spring, nestles beautifully into the surrounding 120-acre wooded grounds.

The spaces between pavilions create what director Don Bacigalupi has aptly dubbed a “palate cleanser” of nature between galleries that are, after all, often filled with depictions of it. Then again, “palate cleanser” may shortchange the dramatic, even spiritual impact of the Ozark setting. Or perhaps I’m especially vulnerable to fall’s charms, having so little occasion to experience them in Houston.

Safdie immediately connected with the site’s spiritual power during his first visit, Walton says in a video that’s part of Moshe Safdie: The Path to Crystal Bridges, one of two temporary exhibitions that opened in October. Featuring architectural models, drawings and photos, the show traces Safdie’s development through prior projects, including Habitat 67 in Montreal, the Yad Vashem Holocaust Museum in Jerusalem, the National Gallery of Canada in Ottawa, and the Skirball Cultural Center in Los Angeles.

Although Crystal Bridges’s sculpture collection is small, art and nature comingle most effectively with outdoor pieces by Roxy Paine, Mark di Suvero and Robert Indiana. A Cor-Ten steel version of Indiana’s iconic LOVE sports a rich patina that’s set off beautifully against the turning leaves on a trail leading to a James Turrell Skyspace, which is set in a circular stone structure.

Work by Turrell also appears in See the Light: The Luminist Tradition in American Art, an oddly cursory exhibition that unveils the museum’s latest major acquisition, Mark Rothko’s medium-sized 1960 painting No. 210/No. 211 (Orange), featuring three orange bands floating over a maroon ground. The Rothko, a much-needed boost to Crystal Bridges’ anemic abstract expressionist holdings, may look better in the postwar galleries, where it will move after the show closes Jan. 28. Its impact in See the Light is blunted somewhat by having been installed under spotlights in a dark corridor.

Tacked onto a small gallery with a handful of paintings by Heade, John Singer Sargent and Dove, whose Sea and Moon II is hauntingly ravishing, the corridor is mostly devoted to neon and fluorescent sculptures by Dale Chihuly and Dan Flavin, respectively; theatrically lit works by Larry Bell and Robert Irwin, both loans from the Norton Simon Museum; and light works by Jim Campbell and Turrell, who lent Sloan Red (1968), a walk-in light installation.

The Safdie show is both more cohesively installed and more substantial, pointing out precursors to how he approached Crystal Bridges with respect to integrating architecture with landscape, exploiting dramatic outdoor vistas, using architectural concrete banded with cedar, and dividing a building into a complex of pavilions.

But if you’re going to time your pilgrimage to Crystal Bridges to coincide with a special exhibition, the one that really matters is To See As Artists See: American Art From the Phillips Collection at the Amon Carter Museum of American Art in Fort Worth. (If you’re driving, stopping in Fort Worth will add just over an hour to the 10-hour drive from Bentonville.)

Featuring top-drawer paintings by Winslow Homer, John Sloan, Philip Guston, and Richard Diebenkorn, among others, it’s a revelatory look at just how rich the Washington, D.C.-based museum is in American works from 1850 to 1960.

From an eye-opening selection of paintings by the obscure modernist Karl Knaths to panels from Jacob Lawrence’s powerful Migration series, you’ll see much that complements both Crystal Bridges’ holdings and the Amon Carter’s terrific collection, stocking up your mental image bank before hitting the open road one last time for home.