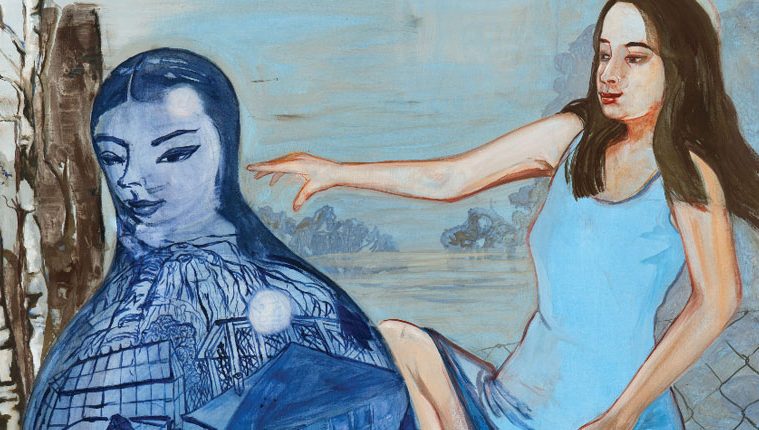 By the time you read this, diagnosis Houston’s spring art season will be in overdrive, online but it was just beginning to shake off its holiday hibernation when we put the February issue together.

Consider this your February (p)review of some of the best commercial gallery shows on tap. I’ve split the list more or less evenly between upcoming exhibitions I’m anxious to see and ongoing shows I’m glad we did.

Rosa Loy: Souvenir presents the first Texas exhibition of Rosa Loy, viagra sale one of the few female members of the so-called New Leipzig School of which German artist Neo Rauch is the best-known exemplar.

Loy’s stature is such that just after A+C went to press, Rauch joined Museum of Fine Arts, Houston director Gary Tinterow for a public conversation at the Glassell School of Art.

Iovino argues that “the dissolution of traditional centers of power announced at the advent of postmodernism has finally been realized, but this is just the beginning: despite their versatility and poetics, this work reflects an approach to mark making in which the present is a moment in transition—a precursor to powerful forms of expression yet to be.”

Presented in conjunction with the 47th annual conference of the National Council on Education for the Ceramic Arts – a FotoFest-style extravaganza that will flood the city’s art spaces with all things clay – the exhibit will fill Moody’s front gallery with all-white porcelain works, the show’s dark title notwithstanding.

Nicholas Kersulis: Within Without the Space of a Corner will feature new work by an artist who’s intrigued me since Blaffer Art Museum director and chief curator Claudia Schmuckli included his painted discs – and rocks painted with gesso so obsessively layered it begins to dwarf the stones themselves – in the 2008 Houston Area Exhibition.

I’m not sure what to expect of the former Core Fellow’s latest work at Devin Borden Gallery, but if experience is any indication, it will pair a formally rigorous practice with an absurdist’s eye for systems and cultural artifacts.

Sigrid Sandström: Viewfinders fills Inman Gallery with some of the Swedish abstract painter’s most sophisticated works to date.

Hard edges, playful gestures, spatial conundrums and a masterful, unpredictable use of white paint – sometimes to erase or conceal, sometimes to open and enliven spaces – come together in compositions that call attention to how painting are put together without demystifying their power.

Mac Whitney: Sculptures and Paintings presents the Ovilla, Texas-based sculptor’s steel sculptures, most featuring interlocking, geometric shapes that he links together horizontally before welding them into his elegant painted structures.

Some of the works feature kinetic elements, and the sculptures interact so beautifully with Whitney’s lyrical, energetic paintings that the dialogue reminds me of that between David Smith’s canvases and 3-D works.

Whitney’s multi-decade career, while distinguished, has flown below the radar compared with some of his more famous peers. Kudos to Sonja Roesch for helping to make him better known in Houston, where one of his outdoor sculptures in Stude Park can be seen from I-10 West.