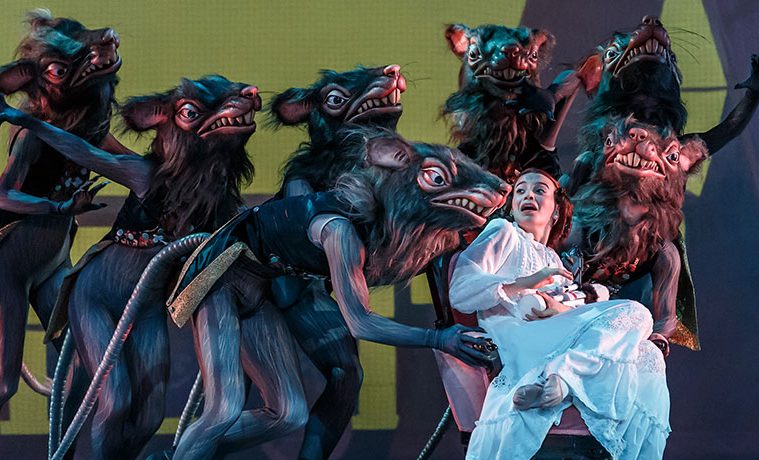 20 Plus Christmas Shows to See in Texas this Holiday Season

Artists of Ballet Austin in The Nutcracker. Photo by Tony Spielberg.

Christmas might seem like a time of great joy and peace, but it can be a season of psychological terror, and I’m not talking holidays-at-the-in-laws; I’m referring to Texas performing arts. December on stage is a month of tormenting ghosts, rampaging giant mutant rodents, power-hungry angels, and bullying caribou—and those are just the shows deemed suitable for children.

For many Texans, going to a favorite holiday show or dance performance is as much of a holiday tradition as a tree covered in lights.  Texas performing arts organizations are more than happy to help us keep those traditions; yet, if we examine our beloved holiday shows away from those softly colored blinking tree lights, we might see that the heroes and helpful Christmas spirits we love so much are a bunch of amoral scoundrels and criminals. So, before the December’s sugar-plum visions color our perception, let’s take a good hard look at the rogues’ gallery of characters getting us into the holiday spirit. 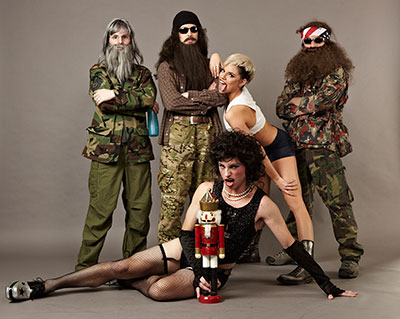 Who is our favorite dancing legume-smasher, really? He comes to Clara’s rescue during the battle for the Giant Christmas Tree, yet it’s Clara’s shoe-wielding skills that save the evening. Has anyone bothered to ask the rodent army what their grievances are? Have they scurried too long in the darkness of Sugar Plum tyranny? What kind of monarchial system of government are these fairies and sweetened-fruit people running, anyway? And how does our player Nut Prince fit in? He’s quick to whisk Clara away for a Christmas night on Lemonade River, but he doesn’t miss a chance for a pas de deux with both the Sugar Plum Fairy and the Snow Queen.

There are plenty of opportunities to attempt to untangle the royal family line of the Kingdom of Sweets because they reign across the state. Houston Ballet holds court with 33 performances of Ben Stevenson’s beloved classic; Watch for Australian Ballet principal artists Leanne Stojmenov and Daniel Gaudiello performing on Dec. 7, 12 &14 as part of a special dancer exchange. Another version of Stevenson’s Nut at Texas Ballet Theater sets up court in Dallas at Winspear Opera House Nov. 28-Dec. 7, and at Bass Hall, Dec. 12-17. Don’t forget their epic Nutty Nutcracker on Dec. 19 at Bass Hall. We’ve heard rumors of twerking…

Ballet Austin’s Nutcracker, Dec. 6-23, can boast a new production with set design by Holly Highfill and costumes by Judanna Lynn. In Counter Nut programing, Tapestry Dance Company is touting its production of  Of Mice & Music running Dec. 8 – 21 at The Long Center, Austin as a jazz Nutcracker. Ballet San Antonio presents its first Nutcracker, Nov. 28-Dec. 7, in the Tobin Center for Performing Arts, with sets and costumes all made locally, plus live music and more San Antonio children in the production than ever before. 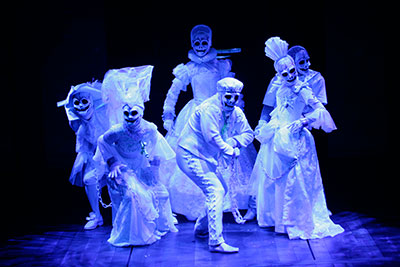 The Company in the Alley Theatre’s A Christmas Carol – A Ghost Story of Christmas at the University of Houston, Nov. 21 – Dec. 24.
Photo by T. Charles Erickson.

A Christmas Carol has been celebrated for 150 years as a feel-good story for the whole family, teaching a message of charity and kindness, but really; Isn’t this a tale of psychological horror? Here we have the elderly, law-abiding financier, Ebenezer Scrooge. His main sin (besides being a one-percenter and jobs creator): He refuses to get in the holiday spirit. Since Victorian Christmas requires conformity, London’s citizens, on multiple reality planes, crush him like nut. A pack of time-ghosts and his dear, dead partner, Jacob Marley, kidnap Scrooge, and subject him to a series of sleep-deprivation and behavior-modification experiments.

Texans can’t get enough of this show, with each production and city trying to put a different spin on it. In Austin, Zach Theatre’s version is all about the music with a gospel, rock, soul, and harmony classic and modern hits score. Houston has three versions, including a world premiere, one-man opera from Houston Grand Opera, running Dec. 5-21, written by British composer Iain Bell and libretto from actor Simon Callow. From Dec. 9-23, Classical Theatre Company is promising to go back-to-basics with a new adaptation closely tied to the words of Dickens’s original short story in their new Chelsea Market digs. The Alley Theatre has been scaring Houston for over two decades with its version, but they have heightened the horror in recent years with macabre glow-in-the-dark ghosts and the spookiest of sets. The Caroling terror begins on Nov 21.

Houston might think it wins the Christmas Carol competition, but Dallas, Fort Worth and North Texas will out-Carol Houston, starting with Dallas Theater Center’s Nov. 25-Dec. 27 run of a special-effects- enhanced Carol filled with flying ghosts and an indoor snowfall. Ebenezer Scrooge, a musical version, celebrates 34 years at Pocket Sandwich Theater Nov. 28-Dec. 23. One Thirty Productions brings A Christmas Carol: The Radio Show to Bath House Cultural Center from Dec. 3-Dec. 20, as one radio station manager in 1947 attempts to perform the entire story by himself. In what may be the most realistic variation on the Carol theme, in The Trial of Ebenezer Scrooge at the Richardson Theatre Centre Dec. 5 – 21 Scrooge gets his day in court as he sues Marley and those time ghouls for emotional distress. Take them for all they’re worth Ebbie. Finally, Hollywood may try to fool us into thinking the Will Ferrell Christmas blockbuster Elf about an orphan boy accidentally kidnapped by Santa and raised as the North Pole as an elf is a new story, but when Buddy sets out to find his bio dad and reeducate the Christmas spirit into him, all we hear are the echoes of Christmas Carols in our head. In the Broadway version, Elf the Musical, jingling its way Nov. 18-23 into Bass Hall in Fort Worth and Nov. 28-30 into The Long Center in Austin, Buddy uses his pointy green shoes to stamp out every bah humbug in New York.

One Trainee Angel Plotting his Way up the Heavenly Corporate Ladder 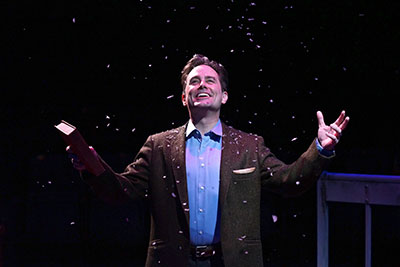 Martin Burke in The ZACH Theatre production of This Wonderful Life.
Photo by Kirk Tuck.

What’s with non-corporeal entities playing head games with protagonists experiencing Christmas blues? Did Clarence, the proto-angel, really think the best way to cure George Bailey’s depression would be to show him a dystopian future where he never existed, or was Clarence so ambitious to get his wings that he didn’t care whose life he ran, or in this case flapped, over?

Maybe the time-ghosts and Clarence can conspire over dinner breaks at Zach Theatre because for the second year, Austin favorite Martin Burke is back for his one-man This Wonderful Life from Nov. 28-Dec. 28. Meanwhile, at the Museum of Fine Arts, Houston (as part of Movies Houstonians Love), Catastrophic Theatre’s Tamarie Cooper will introduce a special showing of It’s a Wonderful Life on Dec. 17.

A Herd of Bullying Caribou Gamers 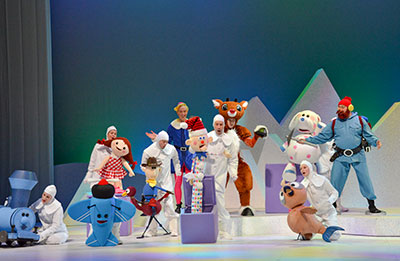 Quit putting on European airs, Dasher, Dancer et al: In North America, aerial or not, you’re caribou! While Rudolph and his band of Island of Misfit Toy friends, aka nerds, will save Christmas in the end in Rudolph the Red-Nosed Reindeer: The Musical at Bass Performance Hall in Fort Worth, Dec. 5–7, AT&T Performing Arts Center’s Majestic Theatre in Dallas, Dec. 16- 21 and Tobin Center for the Performing Arts in San Antonio, Dec. 22-24, those caribou might have let Rudolph join their reindeer games if Santa had taken steps to prevent a hostile work environment. 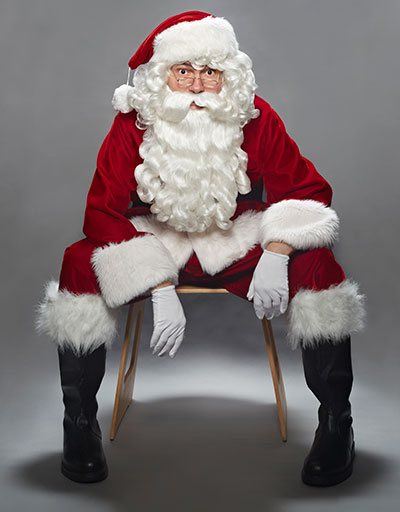 If Dallas/Fort Worth is the place for Scrooge, Houston is set for a holiday season of world premieres, which will likely introduce us to new rascals we’ll shower with holiday love. Every year, Stages keeps an old UK comic tradition, Christmas Panto—as in pantomime: Plays filled with plucky fairytale heroines, cross-dressing baddies, and bawdy jokes for adults that will fly over the heads of the little ones. This year the girl with the longest locks battles the Undead in Panto Rapunzel (and Zombies) running Dec. 4-Jan. 4. While not a world premiere, Stages’ other holiday show, Sister’s Christmas Catechism: The Mystery of the Magi’s Gold, might have the scariest Christmas character of all, a know-it-all Nun/Detective. Stark Naked Theatre will make their first holiday show memorable with the world premiere of Ho Ho Humbug ( Dec. 4-24), with playwright Scott Burkell playing a cynical New Yorker forced to sell his body as a Macy’s Santa in order to pay the rent. Horse Head Theatre wraps Abby Koenig’s one-women show The Jew Who Loves Christmas, into their Holiday Huzzah! holiday story open mic night on Dec. 13. Since Koenig has only performed the play once before, this is one theatrical regifting to keep. 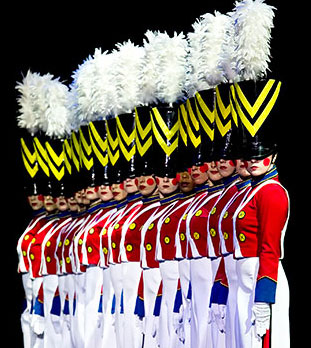 TUTS and Broadway at the Hobby presents
The Radio City Christmas Spectacular
featuring The Rockettes, Dec. 5-28 at the Hobby Center.
Photo courtesy of MSGE.

This gang might look lovely dressed in golden bling, but if you cross the Rockettes, but these ladies can kick. They might say it’s for authenticity that they’re bringing live animals for a show-stopping live Nativity scene for the Theatre Under the Stars and Broadway at the Hobby Center presentation of Radio City Christmas Spectacular, Dec. 5-28,  which includes the still adorable Parade of Wooden Soldiers number from 1933.

So there they are, those holiday thieves who annually steal our hearts. This year, no doubt, we’ll willingly put ourselves in their clutches once more and then hum a joyous Christmas melody as we leave the theater and count the 365 days until we can see them again.