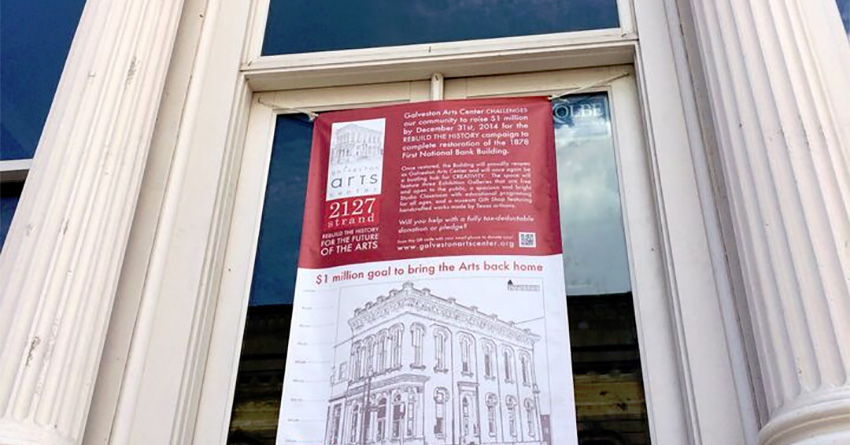 The Resilience of the Galveston Arts Scene

It’s Saturday night on the Galveston strand, rock music pours out of bars that are filled with a mix of barflies and tourists from the cruise ship docked at the port. But a few blocks over on Post Office Street, young professionals, families, and art aficionados pack into over 25 galleries, shops, and cafes for the Galveston ArtWalk. The ArtWalk’s success is a reflection of the renewed Galveston art community, which has seen more than its fair share of ups and downs over the years.

On Market Street, the Galveston Art Center has only a few visitors exploring its lone gallery. But in the back office, Houston art angel Clint Willour, the proverbial captain of the Galveston art community, current curator, and the progenitor of the ArtWalk, is gearing up for his biggest year yet. The office is stacked high with boxes filled with jewelry, hand-made toys, and art books for the museum store as the Center returns to the First National Bank building located at 2127 Strand.

The Center’s current exhibit, Elinor Evans’s A Force of Nature: 101, was added because of delays in construction. The exhibit reflects Willour’s aesthetic—quality art by regional and diverse artists. When Clint first moved to Galveston in the 90s, he revamped the center, as he explains, “There’s enough good art in this state that it just made sense to focus primarily on local, regional artists.”

Willour is just one member of a community of artists and art lovers that has grown in Galveston since the 1960s and 70s. In 2008, Hurricane Ike fractured this community. The seven years since have seen a series of triumphs and setbacks. Galveston Art League was one of the first organizations to rebuild in 2009. The now four-year-old Galveston Artist Residency, headed by Director and co-founder Eric Schnell, offers another example of how art space is being built to last. It’s also another way Galveston can serve as a launching pad for new artists. Residents receive a stipend, living quarters, and in true Galveston style—a bicycle to roam Seawall. The resident artist’s work will be featured at the CAMH exhibit Island Time: Galveston Artist Residency—The First Four Years, Nov. 21, 2015–Feb. 14, 2016.

For Galveston Art Center, rebuilding meant seven years of hard work. “When it was created as the Centre on the Strand, the building needed over 100 years of restoration. We were in the process of stabilizing the structure at the time of Ike. The scaffolding actually saved the building,” Willour explains. After Ike, restoration started again, unearthing surprises like a fresh water spring under the basement. Funding was another hurdle, despite support from granting organizations such as The Houston Endowment, Inc., The Brown Foundation, Inc., and the Harris and Eliza Kempner Fund. When tragedy enters, opportunity is found. As Willour states, “Several years after Ike, it looked like we weren’t going to be able to do it. There was talk about leaving the strand. But everyone just felt that we were stewards of that building and it was the right place for us.” When it opens, the new Galveston Art Center will include three art galleries, a studio classroom, an installation shop, offices, a library, a kitchen and a museum shop that will also sell art supplies for local artists. The building is also fully accessible and meets ADA Standards.

To an outsider, the idea of spending millions of dollars to restore a building never meant to withstand the force of nature seems unfathomable. But the community serves more than tourists, as the Center’s executive director, Jennifer Justice explains, “For the last seven years we’ve been unable to expand our outreach programs.” Galveston Art Center provides off-site workshops that help bring issues of the art world to the broader public. Justice states future on-site outreach will include “new education initiatives, like pairing high school students with professional artists to create permanent installations which will enhance the setting of the island.” The Center’s budget has nearly doubled, and it will host a “Coming Home” Gala Celebration Nov. 13th in order to support these initiatives. The gala will feature three new exhibitions, on view until Jan. 3, 2016 and ArtWalk will take place two weeks later, on Nov. 28th. The main gallery will feature paintings by Francesca Fuchs and Galveston painter Janet Hassinger and Houston artist Arielle Masson will be featured in the upstairs galleries. All three women have all taught at the Glassell School of Art, but each has a unique background and style.

It is a testament to the generosity of the Houston regional art community that the Center returns to its original home. At the recent ArtWalk I asked one artist, “Why Galveston?” He said, “I’ve been coming here my whole life.” Artists return to the island for nostalgia, for the muse of the ocean, but also for the tenacity of the community that insists that Galveston is worth preserving. And that’s the difference between an art scene and an art community—a community rebuilds.