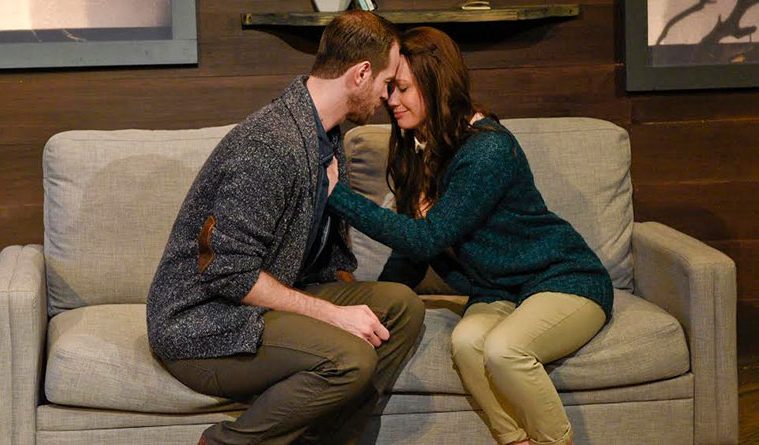 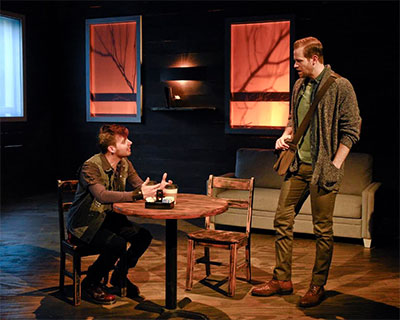 Humans are a funny lot, aren’t we? Despite centuries of experience there is still so much we don’t understand.

The playwright Amy Herzog is adept at pinpointing those aspects of ourselves we still can’t seem to figure out and she uses her writing to examine them in excruciating detail. Last year, in Second Thought Theatre’s production of her play Belleville, Drew Wall and Jenny Ledel performed Herzog’s brutal dramatization of our predisposition towards personal dishonesty; in the play we watch a young marriage break down over a refusal on the part of each character to be honest with themselves, and therefore, with their partner.

STT’s current production of Herzog’s The Great God Pan, takes dishonesty once again as its subject, only this time, Herzog explores what happens when, despite our newly enlightened, 21st century selves, we are forced to come to grips with the truth we still suppress.

Alex Organ plays Jamie, a somewhat successful writer who reunites with Frank (Drew Wall), a childhood friend after what we infer to be quite some time. Their lives are different, something Director Carson McCain adroitly plays up in the opening scene in order to better contrast with the evolution of the two characters that will follow: Jamie is clean-cut and living with his beautiful girlfriend Paige (Natalie Young), Frank is tattooed and pierced but he’s finally gotten his life together after stints in prison.

They’re brought together by something important Frank needs to share with Jamie and that something sets off a drastic devolution of Jamie’s fragile mental psyche. The revelation forces him to wrestle with his memory (or lack thereof), trying to piece together the puzzle of what remains of his past. Over the course of the play we meet Jamie’s parents and his girlfriend, three people whose respective struggles with themselves and the past are illustrated more in the service of how they affect Jamie than how they affect the characters themselves.

While Herzog’s plot and dialogue are a bit stale in her obvious predilection towards the contemporary literary trope of proving the good guy’s life is really no better than that of the miscreant, Wall and Organ’s performances make up for whatever weaknesses exist in the writing.

Organ is one of the most realistic actors on Dallas stages, watching him move through a disintegrating emotional arc would be fun if it wasn’t so sad. His presence is almost too commanding for the small, minimalist set, but it would be difficult not to be impressed by his ability to register even the slightest emotion, like uncertainty, so realistically.

Bob Hess as Jamie’s dad and Cindy Beal as his mom are excellent foils for Jamie’s confusion as they illuminate Herzog’s depressing view of our emotional intelligence. Young’s Paige is much the same, constantly harming as she tries to help Jamie and their relationship. It’s as if Herzog is doing everything in her power to show us the futility of one human asking another for help: how should one expect help from another when it should be clear we can’t even help ourselves?

Herzog is aware, more than most, of the power of suggestion, especially how that power manifests in our relationships, and how its effect is exacerbated by our failure to know ourselves. Hers is a body of work dedicated to sussing out the effects of this reality on the young, white, middle-class of the 21st century. Like James Baldwin’s summary of race relations in America in the 1960’s: if you know something, and I know something, and you know I know it, and we cannot talk about it, “it takes no time at all before we cannot talk about anything. Before absolute silence descends.”

Despite the deafening conversations with which we surround ourselves, we’re living in silence.

Towards the end of the play Cindy Beall’s Cathy talks to her son as she takes an insomnia-driven walk through the woods near her home, quoting briefly a section from Elizabeth Barret Browning’s “A Musical Instrument.”

What was he doing, the great god Pan,
Down in the reeds by the river?
Spreading ruin and scattering ban,
Splashing and paddling with hoofs of a goat,
And breaking the golden lilies afloat
With the dragon-fly on the river.

It’s a poem about the duality of art; the contradiction between art’s ability to build and to destroy at one and the same time. Herzog too is unsparing in her estimation of truth: it may be necessary, but it will bring pain before peace.