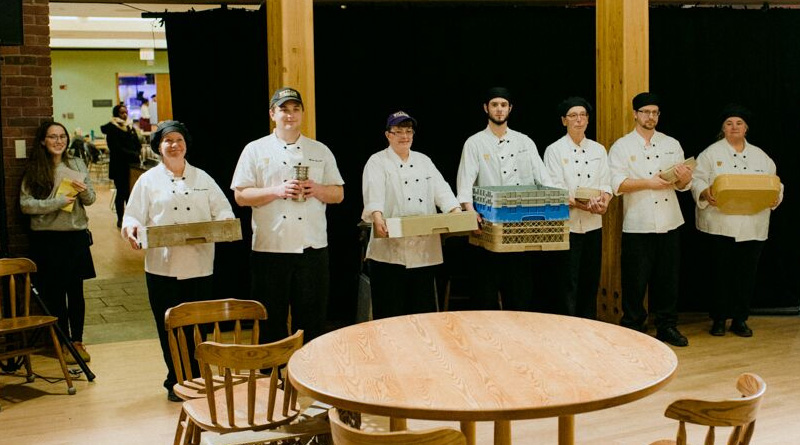 A Feast of Movement: Forklift Danceworks’ Served at Williams College

When I was assigned this story, editor-in-chief Nancy Wozny advised me to think of  “Allison Orr as a daughter of Ted Shawn in that she is interested in the movement of work … she doesn’t use dancers, but people.”

With that statement alone I was intrigued.

Ted Shawn broke many stereotypes when he started his company of Men Dancers in the early 1930s – not least because it was a dance company solely of men, but also because he chose not to use trained dancers, but athletes.

Orr, the founder and director of Forklift Danceworks, is certainly continuing this legacy. Orr creates works that feature what she refers to as “the often-overlooked choreography of work that sustains our everyday lives.” Since Forklift Danceworks was founded in 2001, Orr and associate choreographer Krissie Marty have created over 25 community-based dance projects, collaborating with a range of people from sanitation workers (complete with choreographed sanitation trucks) and baseball players to energy line men and arborists – to name but a few.

The team’s latest project is entitled Served, A Dance for and by Williams Dining Services, (Feb. 2-3, 2018) collaboration between Forklift Danceworks and Williams College Dining Services, presented by the CenterSeries at the ’62 Center for Theatre and Dance in Williamstown, Massachusetts.

For a total of three months Orr and Marty, and assistant choreographer Clara Pinsky, came to know the staff at Williams, shadowing and working alongside them. “It’s been a real gift to get to know these employees,” Orr explained, and “to see how much they care about their work and the students.”

Upon arriving at the college, the audience was assigned a group. The groups were then broken down into “tours” of about eight people and led by a tour guide. After a short introduction we were led through dining halls and kitchens. What struck me straight away was how proud and excited the dining services staff looked – the anticipation in the air was completely infectious.

We were led on a circuitous route down into the belly of the building, and then quietly ushered into a locker room. Music started to play, and a voiceover began of Leticia Guzman – born in Honduras, Guzman has been working at Williams for 17 years. This inclusion of the stories of these often unseen workers had me hooked. Guzman entered, and in front of us went about her daily routine of getting changed and tying back her hair ready for her shift.

There was something so intimate about this section, not least because the audience was squeezed along one side of the room, but because we were watching Guzman’s private daily preparation. Later, we had the opportunity to ask questions and she expressed how nervous she was, but that it “was nice to share what we do … nobody comes here.” It felt like being backstage and watching a performer ready themselves for their first stage entrance.

Back on the move once more, we were led up winding flights of stairs, squeezing past other tours. There was a slightly chaotic feel, lots of people earnestly speaking into headsets and a couple of false starts, but this only added to the very human nature of the performance.

Next, my tour was brought to Old Baxter – a dining room where seven staff members went through the motions of setting and clearing plates, cups and cutlery for service and then washing them – one woman’s fast paced action of filling and emptying a dishwasher was mesmerizing. She stacked and unstacked the plates and cups with astonishing swiftness, while the other performers rushed back and forth, intertwining with each other, as they stacked and cleared dishes.

The music and voice recordings in this section emphasised the connection that many of the staff felt to Williams College. With many working there for over 25  years, it quickly became apparent that this was a career for many of these staff members.

Next we were taken to Whitman’s Servery, where we waited outside the double doors before they were flung open. We entered to be greeted by a flurry of activity as chefs worked on preparing food – chopping, frying, flambéing and calling out to one another – all accompanied by a live jazz trio. Here we actually got to try some of the food – immersive theater tastes pretty good.

Our next stop was the prep kitchen where the staff burst from the walk-in fridges and began their work – accompanied by composer Graham Reynolds, who played percussion of a variety of kitchen utensils.

There were many more “stops” but it depended on what tour you were on. You could easily have returned each night and seen something different.

Finally, all groups and tours were led back to the main atrium. Here all the performers came back together in a series of moments – beginning with Lisa Cahill’s solo making cinnamon buns. In this finale the performers really showed off their hard-earned skills and the choreography of their everyday routines. Fruit carving, knife skills, the moving of hot boxes and even mopping became basis for Orr and Marty’s movement language.

Solo for a baker was moving piece performed by 82-year-old baker Jerry D’Acchille. In a soft spotlight we watched the old man (working at Williams for 30 years) pipe buttercream flowers to the soundtrack of his life story. D’Acchille decorated a large sheet cake smoothly switching between different piping bags and techniques. Having moved to the U.S. at 15, he has been baking for 65 years.

The performance ended with Buffet en Masse where the entire cast prepared in choreographed style for a banquet. The voices and stories here told of the staff’s strong connection and passion for the students. Finally, we were all invited to eat the buffet!

The evening was a fascinating combination of choreographed movement, music, oral history and food. I think everyone leaving the performance came away with a new-found admiration and respect for the staff and the great (and tasty) work they do.