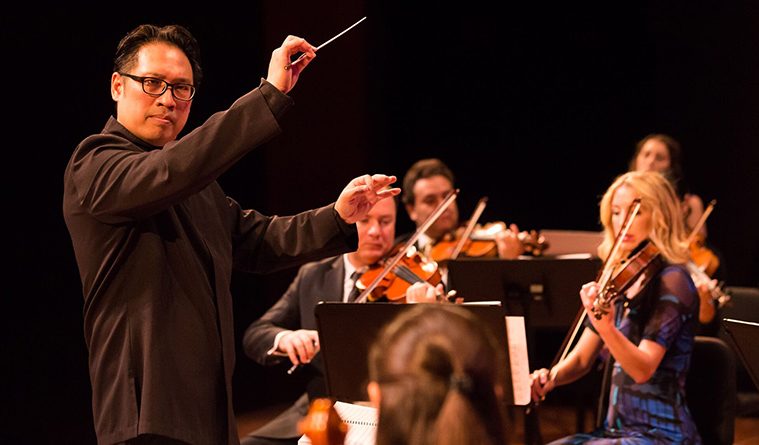 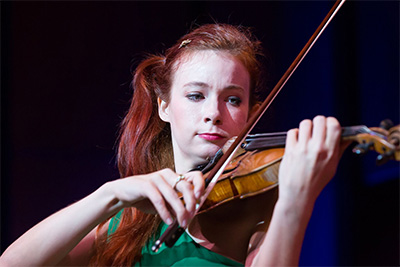 Against significant odds–flood damage at the Hobby Center and other Theater District performing arts venues, coupled with the personal losses suffered by many musicians during Hurricane Harvey– Aperio’s season opening concert, an all-Philip Glass affair, took place at Zilkha Hall Saturday night (Sept. 9). Gathering its biggest performing forces yet with a chamber ensemble of 30 for the North American premiere of Glass’ Aguas da Amazonia, Aperio celebrated the American minimalist pioneer on the occasion of his 80th birth year in style. The large scale 55-minute piece, inspired by the waters and tributaries of the Amazon River, is an exuberant reimagining and merging of the composer’s signature thematic material. Maybe it was watching the time-lapse video of the rise and fall of Buffalo Bayou during Harvey, or driving through my still-flooded neighborhood on the west side, where a segment of Beltway 8 looked like a river a few days ago, fresh and searing images of the storm that left Houston devastated surfaced frequently in my mind’s eye during the performance.

Before the concert, Aperio announced that it is partnering with the Harvey Arts Recovery Fund to support the disaster recovery needs of the creative community in the region. This initiative will focus on aiding individual artists and rebuilding smaller arts organizations. Founder and Artistic Director Michael Zuraw hoped to not only bring awareness to the initiative, but provide the arts community with an opportunity to make a public show of service, and keep Aperio’s commitment to the musicians who depend on the show to go on. “I can see so many reasons why one would’ve cancelled the event, but honestly, I saw that we could do something meaningful. I think it’s very important to let people know that Harvey has not drowned the arts scene downtown!”

The rest of Aperio’s 2017-2018 season is truly adventurous. “We didn’t want to limit ourselves with a particular theme,” explains Zuraw. “We want the audience to be intrigued and surprised. In the planning process, when you start getting nervous about it, that’s when you know you are on the right path.” 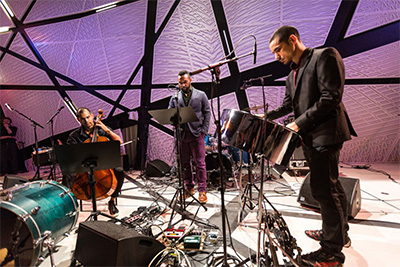 Jeffrey Ziegler and Roger Bonair of (M)iyamoto is Black Enough on Oct. 14 at the MATCH. Photo courtesy of the artists.

That was the case with bringing to H-town the contemporary/experimental band (M)iyamoto is Black Enough (Oct. 14), a groundbreaking group challenging listeners with a collage of improvisations and complex original compositions using a palette of steel pan, drums, cello, and slam poetry. Multiple influences, including hip-hop, jazz, punk, rhythm, and world music, will come together to form an indefinable sound world. The ensemble’s head-turning name comes from the 2015 controversy over biracial Miss Universe Japan Ariana Miyamoto being accused by some Japanese compatriots as not being Japanese enough. Roger Bonair-Agard, two-time National Poetry Slam Champion and long-list finalist for a National Book Award, uses spoken word, slam style, to address the social issues of our time.

Just like the name of the group, the performance is meant to spark a debate about identity and self understanding. Aperio will be partnering with WITS (Writers in the Schools) for outreach to area high schools, featuring student performers as the opening act of the show. Zuraw admits that this is a learning experience for him as well. “I don’t think of myself as having a pigeon-holed taste in music at all, but I don’t know enough about hip-hop and slam poetry. This will be powerful and engaging on a visceral level. They (steel pan player Andy Akiho, cellist Jeffrey Zeigler, drummer Sean Dixon, and poet Roger Bonair-Agard) make a ‘dream team.’” There is also a Houston connection. Cellist Jeffrey Zeigler and Zuraw were Rice Shepherd School classmates.

The exotically titled program Xochiquetzal//Kukulkan (Feb. 3) will feature several smaller scale chamber music works. “We’ve done many programs about Latin American culture in our 11 seasons,” says Zuraw, “this program is more about the ancient roots of our culture here in the Americas. The music is astounding!” Anchoring the program are Robert Xavier Rodriguez’s five-movement work Xochiquetzal, arranged by the composer for violin and piano, and David Dzubay’s Kulkulkan, written for piano trio.

Xochiquetzal was an ancient Mayan goddess associated with beauty, love, music, and dance. Surrounded by hummingbirds and marigolds, the richly adorned goddess is represented by the violin throughout. The music is lush and virtuosic, synthesizing folk elements and contemporary sounds. The ancient Mayan world is conjured through pentatonic themes, and the quotation of a dance tune called Xtoles, believed to be one of the oldest known melodies. Violinist Chloé Trevor, who premiered this version of the piece in Dallas in 2016, will once again bring her considerable artistry to Houston audiences. Kukulkan was inspired by composer David Dzubay’s visit to the Mayan ruins at Chichén Itzá, the site of the ancient temple of Kukulkan, the “plumed serpent” that has always inspired awe in Aztec culture. The six-movement piano trio is a fantastic reimagining of the various monuments of Chichén Itzá, each with its own ritualistic character. 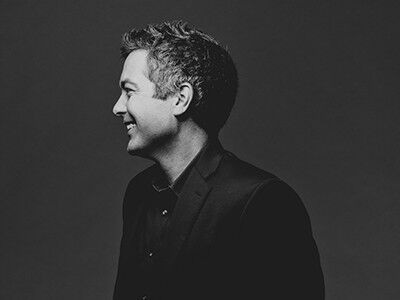 Utah Symphony pianist Jason Hardink will be premiering new work by Jorge Calandrelli with ensemble on April 28. Photo courtesy of the artist.

Aperio is going full glam for its season finale The Glam Seduction (April 28). Six-time Grammy Award winner Jorge Calandrelli will be on hand to guide the musicians in a world premiere performance of his own new work, commissioned by Aperio and yet to be titled. Serving as a counterweight to the richness of Calandrelli’s popular style will be D. J. Sparr’s Glam Seduction for chamber ensemble, a personal favorite of the composer’s from his younger days. Think Eddie Van Halen in concerto grosso form—every player getting a star turn rocking out to virtuosic solo riffs. Smoke machines, strobe lights, David Bowie, and glam rock come to mind—not exactly your standard classical music concert. Zuraw describes the whole program as “a kick in the face.”

Programming has always been one of Aperio’s strengths. Zuraw thinks of it this way–“I don’t want the audience to feel like they are forced to listen to something. I want to seduce them into it. That’s what’s fun about programming. What I always want to do is sneak up on people with something surprising, and they don’t even realize it.”