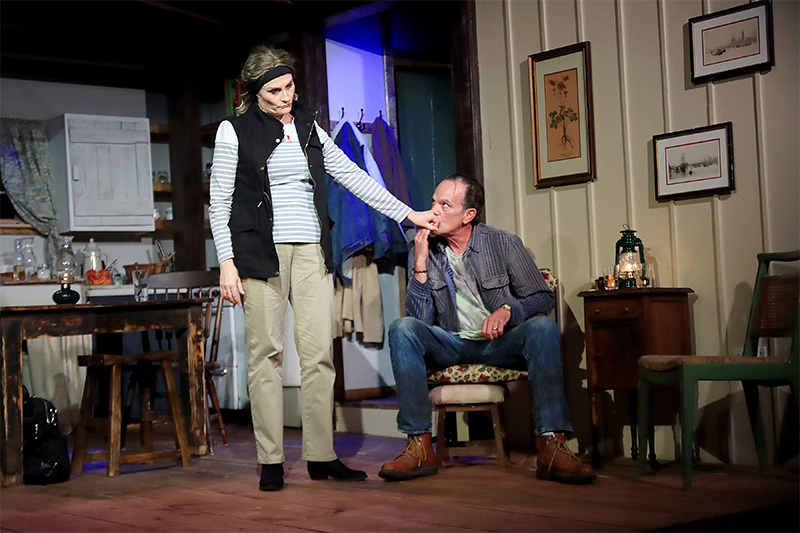 A Lonely Beauty: ‘The Children’ at the Rec Room

Two women, old friends but decades absent from each other, have tea in an isolated British seaside cottage. During their meandering conversation about power outages, yoga, organic gardening and the health of the children, they recall a regional legend about a great city built on an eroding cliff shore falling into the sea. Millennia later the locals swear they can still hear ghostly church bells ringing beneath the tides.

This story of a drowned city under the ocean haunts Lucy Kirkwood’s play The Children having its Houston premiere at Rec Room (through Dec. 7). Though at first deceptively appearing like a domestic drama, such poetic images sometimes make the production feel more like a lyric epic of remarkably flawed heroes about to embark on the quest of a life (and death) time.

To tell too much might spoil some of Kirkwood’s revelations, which under director Brandon Weinbrenner’s guiding tempo, the play reveals like waves–sometimes lapping, sometimes crashing–as they bring bits of that city’s flotsam ashore.

But going back to the tea, Hazel (Sally Burtenshaw), a native of the area says she never heard those bells, while her visitor Rose (Susan Koozin) swears she’s heard their call. Rose has arrived at Hazel’s doorstep with an unknown agenda, disturbing the 60-somethings, Hazel and her husband Robin (John Felch), in what at first seems an idyllic retirement. Much of the first half of the play filled with getting reacquainted scenes between the three contain the kind of cutting wit disguising difficult emotions found in any fine but typical British drawing room dramedy. Quickly it becomes apparent that deep currents of affection, jealousy, love and volatile hostility run between all three.

And yet, Hazel’s nervousness, her obsession with healthy living and early reference to how things have changed since “the disaster” hint that so much more is happening in, and perhaps to, The Children. The relationship confrontations and accusations to come will resonant on a national and maybe even global scale. In this quiet cottage, Rose, Robin and Hazel wrestles with atomic weighty issues about what parents owe to children and vice versa, as individuals and for whole generations.

Earlier this year I interviewed Weinbrenner about his directing process and he seemed to realize in the middle of our discussion that finding the fear in the piece helped him discover his vision for the production. This particular directing philosophy makes Weinbrenner especially ideal for The Children, a work where the most primal fear of both death and a late-life wasted permeate each scene.

This Rec Room production also holds an offstage irony almost as rich as the onstage complexity, as most of the creative crew, including Weinbrenner are years younger than this outstanding veteran cast. Burtenshaw, Koozin and Felch embody these friends, colleagues and lovers with deep currents of history. Some of the literary heft of The Children could have also become an anchor around their performance because almost every image invoked during their conversations–from that lost city to the cottage’s plumbing problems to the names of yoga poses–seem to hold almost too much overly crafted symbolic meaning. Yet these three seasoned onstage artists turn Kirkwood’s language that sometimes verges on prose poetry into realistic speech true to their roles.

Meanwhile the world they live in becomes just as real thanks to the youngish design team: Addie Pawlick (lighting), Victoria Nicolette (costume) and Gage Baker (sound). Rec Room’s managing director Stefan Azizi, who does much of the scenic designing for each season, proves once again why he’s becoming one of Houston’s best stage creators for detailed, naturalistic sets that always contribute another layer to the story and characters that inhabit them.

While Kirkwood poses many questions about the debts each generation owes to the last, next and the world, this Rec Room production of The Children offers a quiet answer that on one small stage at least, they can create a bit of lonely beauty together.