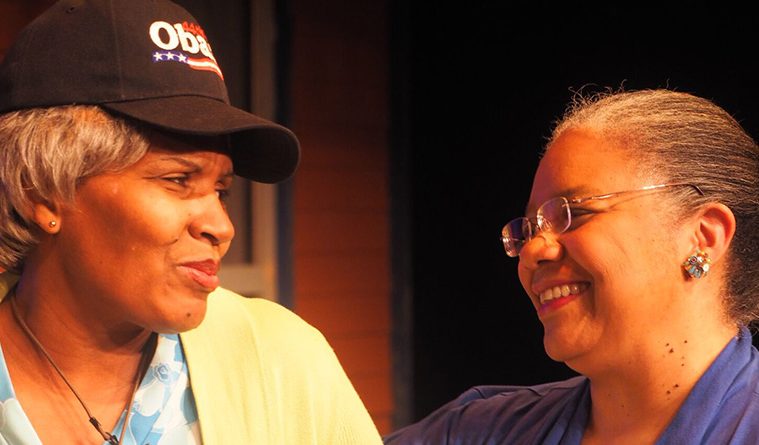 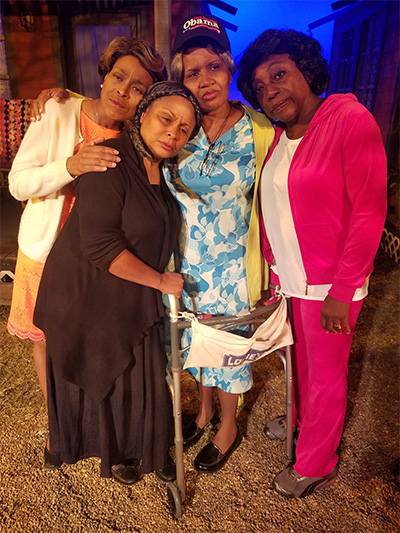 Barack Obama might have been first elected president in 2008 on the fires of hope stoked by social media, but many an old fashioned conversation held on front porches across America helped spread the dream.   Long before Facebook and Twitter, neighbors exchanged information about the real lives of people making up their communities by gossiping and conversing in front yards and stoops. These are the types of supportive communal relationships Houston’s Ensemble Theatre will explore in the world premiere production of playwright Melda Beaty’s Front Porch Society, running May 11-June 4.

Set on Nov. 4, 2008, the play depicts a group of older African-American women in Marks, Mississippi gathering, as they frequently do, on Carrie Honey’s front porch to share the small town news, but with a very special focus that history-making day.

“I became interested in what did the older generation think of the first black president of the United States,” explains Beaty, of the play’s subject matter. “Why did I choose them? Because the older black generation lived through Jim Crow. They had been through segregation. They lived during a time when that was unheard of, and in their minds, it probably was impossible.”

The play’s central character, Carrie Honey, should feel immense, though guarded, hope on this day, but unlike her friends, instead only knows bitterness. Nov. 4 also marks the anniversary of the death of her son who died decades before under suspicious circumstances while in police custody. 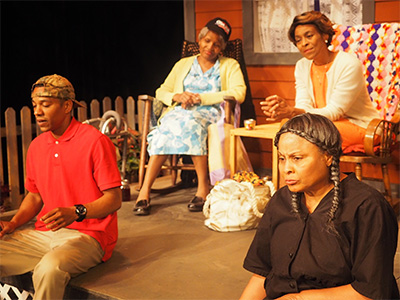 The women on the porch are occasionally joined by two men, a middle-aged mail carrier, who in his younger days was best friends with Carrie’s son, and 18-year-old Terrence, voting in his first election. While the play deals with tragic and real issues, Beaty says putting a bunch of mature women together in scenes can only lead to mutual support and a large amount of humor.

Her neighbors and friends try various ways of trying to help her through this tragic anniversary while also celebrating the monumental election. All that conflicting advice for Carrie leads to some of the conflict and comedy in the play.

“They’re all mature women so you know there’s some stuff going on there with those women,” describes Ensemble Theatre’s artistic director Eileen J. Morris, who also directs the production. “These women come up with some things and say things that you just think: Lord Have Mercy.”

Beaty wrote Front Porch Society in 2010, two years after the election, yet she admits it might have become even more topical in 2017.

“I think it’s about this time we’re living in when black men are being killed at the hands of white police officers and whatever the reason, whatever is causing it, my play touches on that,” she explains. 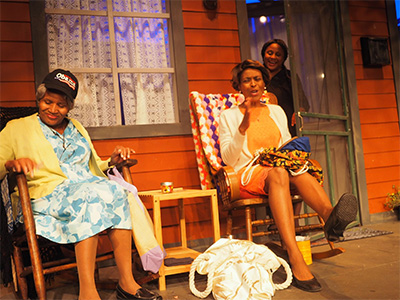 “When I first conceived of the idea, if it was happening it wasn’t making the national news. Now for the last couple of years it’s pretty much all we hear about, so my play is touching on that issue as well as we do have a new president. The one that seemed to be the golden child has exited, and so the play is coming on the cusp of that.”

While the play has gone through several reading workshops around the country, and Morris became aware of it a few years ago, she didn’t necessarily select it for how the issues the story addresses so much reflect 2017 concerns, but instead thought the characters’ relationships and themes in the play perfect for the company’s 40th anniversary season and its celebration of both the company’s deep history as the oldest and largest professional African American theater in the Southwest and the dawn of the next 40 years.

“You look at plays for so many years before you find the right mix and matchup with all the other things that are going on with the world of theater at your institution,” explains Morris about how she assembles an Ensemble season and the placement of this world premiere into their 2016-2017 lineup.

“When I think about all of the plays that we’ve done for this 40th anniversary, each play has some new beginning, some reawakening or some change that is happening within the crux or the underbelly of the story, and that is part of what Front Porch Society has to offer.”

Morris is also excited about directing a world premiere, something they only do every few years at Ensemble, and therefore becoming the first point of reference for later productions of Front Porch Society. Morris hopes the Ensemble premiere will send the play out into the world and other theater companies will want to produce it.

“It’s a story that should be told,” Morris explains. “It’s a wonderful synergy of people coming together and celebrating community and celebrating a time in history, with the first black president, that is historical itself.”