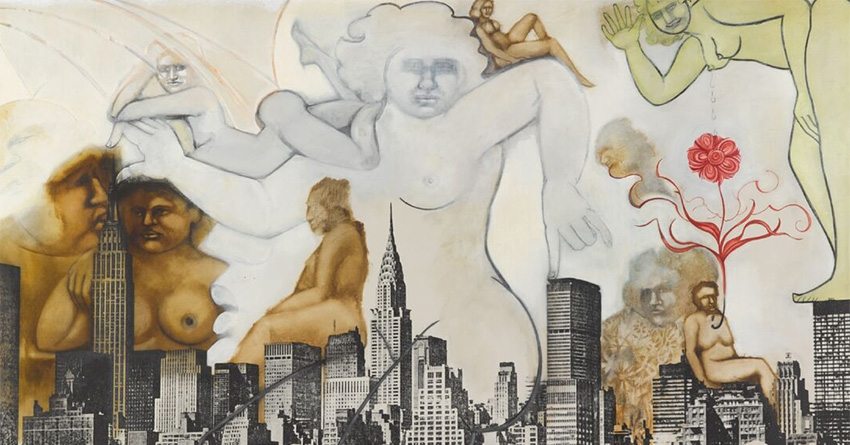 A New Review of Feminist Art

Pornographic images taken from banned magazines in the 1970s were the source material for Betty Tompkin’s photorealistic “Fuck Paintings,” a body of work that was deemed unfit for public consumption and seized by French customs officials in 1973 en route to an exhibition. After the ensuing legal battles to bring them back to New York, Tompkins shelved the series and they didn’t see an exhibition space for nearly 30 years. Now works from this series (which has gained renewed interest in the last decade), along with the work of three of her contemporary pro-sex feminist artists have made their way to Dallas for an exhibit at the Dallas Contemporary, on view until March 20.

Alison Gingeras, adjunct curator, pulled together Tompkins, Joan Semmel, Cosey Fannie Tutti, and Anita Steckel for an exhibit called Black Sheep Feminism: The Art of Sexual Politics, her first for the Dallas Contemporary. What these women have in common is that they made explicit sex-positive artwork that was censored, and they have been largely ignored by mainstream art and excluded from the feminist canon. They’re considered “black sheep” because they strayed from typical feminist subject matter; they eschewed the feminist “norms” that shunned sexually explicit imagery because of its ties to patriarchy, and instead they made work that celebrated male anatomy and heterosexual congress.

Authoritative surveys of feminist art, most notably Los Angeles MOCA’s WACK!: Art and the Feminist Revolution (2007) featured 50 feminist artists, yet excluded Steckel and Tompkins, and the Brooklyn Museum’s Global Feminisms (2007) featured 80 artists and all four of the artists in Black Sheep Feminism were omitted. A thoughtful essay by art historian Richard Meyer in the WACK! show catalogue prompted Gingeras to think more closely about her relationship to feminism.

“As someone who maybe took feminism for granted, generationally speaking, I guess I didn’t feel an urgency to advocate for feminism in my own practice as an art historian,” says Gingeras. “In digesting and looking at those shows carefully, I started to think about how something that was really on the margins has become part of mainstream culture, and I was curious about who got left out of this mainstreaming of feminism. While I picked four, there are others that could have been in the show. [I picked] the ones that I found to be still very challenging for us, and I felt that they hadn’t really gotten their due in this movement.”

Tutti, an artist and musician in the United Kingdom, infiltrated the pornography industry in the 1970s as “one of the girls,” posing in over 40 magazine spreads. In 1976 she officially revealed herself as an artist at the exhibit of the pornographic images at the London Institute of Contemporary Art. The exhibit was censored days after opening.

Steckel’s work features nude women of King Kong-stature happily straddling the Empire State building, and reclining and sitting atop the New York skyline while phalluses spew meteor showers of color. Her work sparked outrage in 1973 at her solo exhibition at the arts center of Rockland Community College in Suffern, N.Y with a local legislator demanding its removal.

Semmel’s nudes feature men and women in the act of sex or laying together, perhaps post-coital, with a perspective view from the chest down, genitals exposed to the viewer. Many of these portraits are of herself and her partner, lending an especially intimate perspective. Semmel was asked to show her solo female nudes and exclude nudes with her male partners in group exhibitions in the 1970s, a request that amounted to censorship.

Semmel joined Steckel (now deceased) in a collective she started called “Fight Censorship Group.” And interestingly the collective did not include Tompkins in its membership, citing her use of pornographic images as source material for her paintings, which they disagreed with because of the porn industry’s historic objectification of women. Surprisingly, the same women who were victims of exclusion were, at the same time, agents of exclusion. The very fact that Tompkins and Semmel are now appearing together in this group show and at press time of this article, were set to give a talk at the Dallas Contemporary debating the ethics of their work, is perhaps the greatest evidence of the need for Gingeras to shepherd in a new era of feminist discourse.

While Gingeras ruminated on her relationship to feminism, she also began to assemble a book of her best writings on artists. In looking at whom she wrote about and whom she included in shows, she realized the vast majority was male. “I started to question my own internalized misogyny,” says Gingeras. “It was an epiphany for me to think more carefully about why I’ve made certain choices… it opened up this whole new area of inquiry for me. That’s how this show started.”

Gingeras’ idea for Black Sheep Feminism had been developing for about five years before the right time or place presented itself. “This historical work is something that’s more valid that ever from the point of view of today. In many ways the show speaks to a generation younger than me, this millennial generation that’s revisiting the legacy of feminism,” said Gingeras. She points to the resurgence of feminist ideals in pop culture, like Lena Dunham’s sexually liberated female characters in her show GIRLS and her newly launched feminist newsletter Lenny, to the very sobering situations playing out in legislation over women’s reproductive freedom and the attack in Colorado on a Planned Parenthood clinic.

“These things are real-life issues, they’re not just abstract intellectual concerns… so I think it is interesting to bring something that is topical and polemical to Dallas,” adds Gingeras. “In New York, a show like this might be met with a blasé reception because we see a lot of controversial content, and you’re preaching to the choir in terms of politics. Texas is considered a “red” state, and we are in an election year with many women’s issues up for debate. This show is very political and timely.”

It will be interesting to see the response to these works, especially Tompkins graphic “Fuck Paintings,” in this politically and socially conservative city. Gingeras isn’t worried about the response and credits executive director of the Dallas Contemporary, Peter Doroshenko, for supporting her bringing this exhibit here. “It’s great that Dallas Contemporary has been really supportive and desirous of this show, and eager to create a space for discussion and debate,” says Gingeras. “It’s a brave thing to do.”

—ALAENA HOSTETTER
Alaena Hostetter is a multimedia journalist based in Dallas.