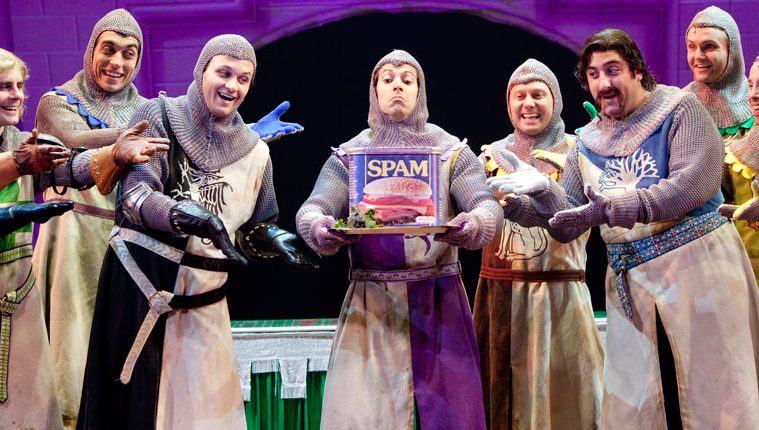 The knights who say “ni”, along with killer rabbits, flying cows and other assorted antics, arrive at the Hobby Center this month when Theatre Under the Stars (TUTS) presents Monty Python’s Spamalot, a self-proclaimed “rip off” of the movie Monty Python and the Holy Grail. As a self-proclaimed Python lover, I’m ready.

Spamalot promises a different type of theater, complete with the level of irreverence that Monty Python made so famous. With book and music by Monty Python member Eric Idle, along with John Du Prez, expect songs like “Fisch Schlapping Song,” “He Is Not Dead Yet,” and “The Song that Goes Like This.” It’s not musical theater business as usual; even the overture is full of musical jokes.  And of course, with John Cleese in the role of God (previously recorded), the  three-time Tony Award-winning Spamalot has some mighty tight authentic ties to its source material, the 1975 comedy film Monty Python and the Holy Grail, a sublimely silly spoof of Camelot. (In a curious twist of programing, TUTS presented a handsome version of Camelot earlier this season.) The film was created between seasons of the British Television series, Monty Python’s Flying Circus, which stared Cleese, Graham Chapman, Terry Jones, Michael Palin and Idle, and the sole American, Terry Gilliam.

Marc Robin, a huge Python fan, directs the TUTS production. “I try to make sure that I honor the heart of each of the iconic characters so that the audience isn’t disappointed, but also try to let the cast bring a little of their own as well,” says Robin, “I tried to stay true to the style of Monty Python.”

The first time I saw a Monty Python sketch I was eight or nine years old, and I’m sure that I didn’t comprehend the breadth of the humor, but I recall thinking it was the funniest thing I had ever seen. The sketch was about a man who goes to an argument clinic, and suffice it to say, he finds himself embroiled in an argument. But the argument itself is about whether or not the two men are in an argument, which makes the argument seeker is livid; this is not the argument he was looking for. I wanted nothing more than to watch this insanity over and over again.

I was not much older the first time I saw the sweeping Camelot-esque film Monty Python and the Holy Grail, which  I also thought to be hilarious. They pretended to ride horses that didn’t exist and encountered a Frenchman who screamed, “I fart in your general direction!” None of it made any sense, and therein lies its funny power.

Surreal comedy has some of its roots in the Theatre of the Absurd. What is “the meaning of life” (which also happens to be the name of another Monty Python film) and why is it so ridiculous? What Monty Python has been forcing their audience to admit is that life is sort of a silly place. We may find ourselves galloping through forests without horses, or we may find ourselves irately arguing over the purpose of an argument.

Much of current comedy owes Monty Python a debt. In the 1980s -1990s the comedy troupe Kids in the Hall brought their brand of absurdist comedy into the fold. In the past few years it’s become prevalent in cartoons. The surreal Cartoon Network show Adventure Time, about a boy and his dog in a post apocalypse dystopia, is a massive hit with both children and adults. Several other comedy troupes have been making big waves, such as The Whitest Kids You Know and the team from Workaholics.

It is a testament to Monty Python that their brand of humor has lasted this long and impacted several generations. One need not be Python-literate to find this musical enjoyable, although fans tend to laugh before the punchline. For those who have never been introduced to the comedy stylings of Monty Python, Spamalot is an easy entry point. You may even be come a Python-ite, and ask the big questions like, “why are we here?” with a smirk and a smile.

According to the God character in Spamalot, it’s to find the “Holy Grail.” When asked why, God replies, “Just get on with it, we don’t have all night.”