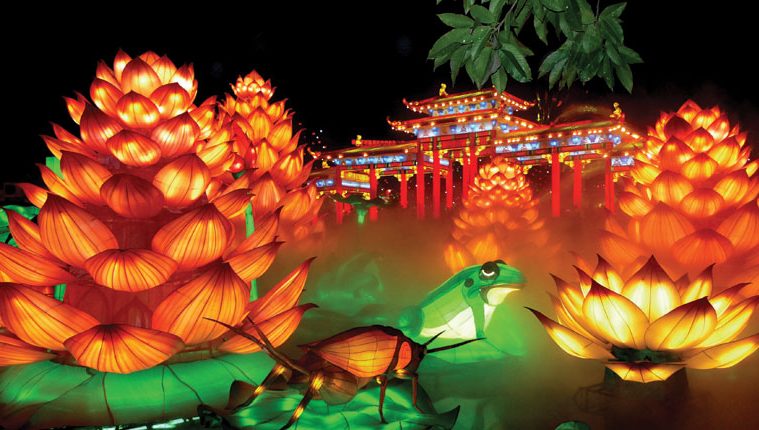 A Reflection of Chinese Culture

A dreamscape of illuminated art portraying animals, price buildings, and myths will be part of the Chinese Lantern Festival at this year’s Texas State Fair in Fair Park, Dallas.

While Dallas doesn’t have a Chinatown, this year’s State Fair is going to add a surprising new feature — a Festival of Chinese Lanterns. Moreover, it’s being accomplished with an out-sized scale and flair that’s, well, Texas-sized. Dragon-oriented décor has been part of the Chinese culture for centuries. Plus, memories of a trip to New York or San Francisco usually include at least one trip to Chinese restaurants and shops that are packed with exotica. This year, Dallas’s State Fair will offer a bit of the same kind of fun with an exhibition of Chinese lanterns. However, some of these works are hundreds of feet long and true feats of engineering. They’re constructed of welded rebar as a substrate and then are wrapped with a thick silk fabric that’s translucent. Thus, the pieces can be lit (sometimes with high-tech gadgetry) and create a bright spectacle in late evenings, especially when their brilliant colors are reflected in the Fair’s lagoon.

Some of the figures (lanterns) that are produced hold mythological import, such as dragons and winged horses. All are deemed good luck and some bear specific meaning. For instance, dragons convey a huge dose of yang and, thus, also intimate power, strength, and even control over rain, floods and hurricanes. They’re also prevalent in Chinese proverbs and folklore — and that kind of backdrop is an interesting way to enter the fun of the Lantern exhibition. The creatures emulated by the artisans are meaningful to Chinese people; however they’re not fraught with overly serious connotations.

Similarly, winged horses or Qilin as they are known are also prevalent in Asian cultures and are said to appear with the imminent arrival of a wise man or illustrious ruler. They’re considered good omens and impart both serenity and prosperity. Qilin are sometimes errantly referred to as Chinese unicorns because they’re merged with more readily known Western creatures that appear in fairy tales. Dual magpies are also depicted. In fact, dreaming of these blue birds is deemed to indicate outstanding luck by the Chinese. Thus, mythological creatures and dream imagery sit alongside towering replicas of destinations such as the Temple of Heaven in Beijing. The latter is approximately forty feet tall and is one, among many, highlights of the exhibit.

When 43 Chinese workers were flown to Texas to produce the large-scale show, they arrived in mid-August and were stunned by the scorching heat. Remedies from their native country were administered and, gradually, they recovered and produced a stunning number of figures in record time. The day I visited their staging area they were so hard at work that they rarely looked up when our small entourage passed by. (I found myself wondering what they thought of Dallas and if they managed to sample Tex-Mex.) Slackers? Not by a long shot. The Chinese stereotype of hard work and concentration was evident.

Some of the pieces in the Festival even offer a straightforward nod to Texas sensibilities. They’ve created longhorns and bluebonnets. And, for your Inner New Yorker, there’s even a lantern version of the Statue of Liberty. That’s countered, however, by a 110-yard-long dragon constructed of 15,000 meticulously tied porcelain dishes — each attached by hand. Light it all up and the State Fair is going to be glammed up like never before. In fact, these folks are the Dolly Parton of Fair exhibitors. More is definitely more in this case. It’s big, it’s outrageously colorful, it’s a tour de force of tremendous work in record time. Who knew? Dallas has gained some serious competition in the Department of Excess.

The Festival will utilize a small amphitheater for entertainment and there will also be vendors selling Chinese crafts and a food court. The swan boats, however, will be out of commission during the exhibition and that’s understandable. Colliding with a mammoth lotus might be less than portentous. However, have no fear. Get plenty of coupons ($19 at night and $10 during the day for adults; $14 for kids, ages 6-12, at night and $6 during the day) and head for this new take on Texas hospitality. Don’t be daunted by the price. The “show” is well worth it. In fact, it’s likely that a new demographic of fair attendees will discover a little bit of Chinese lore goes down nicely with fried Coke — or whatever this year’s outrageously caloric treat happens to be. What’s not to like? After all, these are the folks who gave us fireworks.