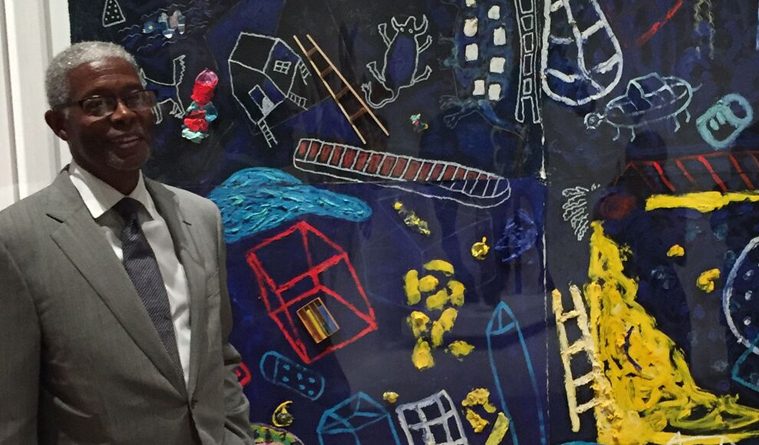 A Remarkable Career: The Single-Minded Clarity of Floyd Newsum

Floyd Newsum at Smithsonian National Museum of African American of History and Culture in front his painting, After The Storm CNN, 2006. 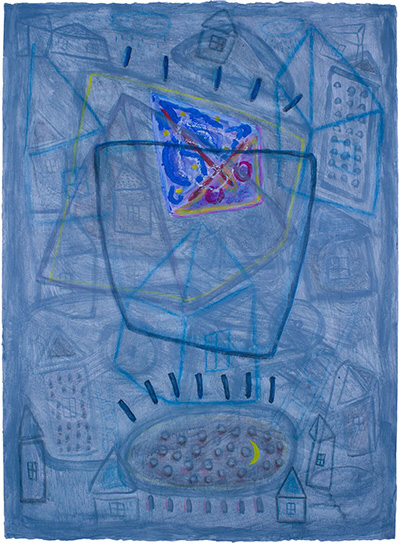 “When someone tells me I can’t do something, I have to prove them wrong,” Floyd Newsum states emphatically as we stand in front of his newly refurbished public piece, Planter and Stems, permanently installed in Main Street Square in downtown Houston.  He isn’t specifically referring to the joyful painted metal forms that squiggle rhythmically skyward, but rather his high school art teacher, who Floyd says “ignored my work” in favor of others in his class. This is a story Newsum recounts laughingly, with the confidence of an artist whose career has rendered any early naysayers preposterous.

The past year has seen a renewal (on the artist’s own terms) of Planter and Stems in advance of the Super Bowl, several high profile gallery shows, and the ne plus ultra—a painting included in the new and much-lauded Museum of African American History and Culture in Washington, DC.  Newsum is also on the cusp of retirement from his career as a professor at the University of Houston Downtown, where he has taught for more than 40 years. But like many artists getting ready to retire, he seems to be revving his engines, excited to devote all of his time to the studio.  “It’s always been my dream to be a full-time artist.” I spoke to Floyd Newsum in his studio in the basement of the UHD campus, a short train-ride from Planter and Stems, as he prepared for a show of new paintings at the Nicole Longnecker Gallery, Jan. 14-Feb. 18, 2017. 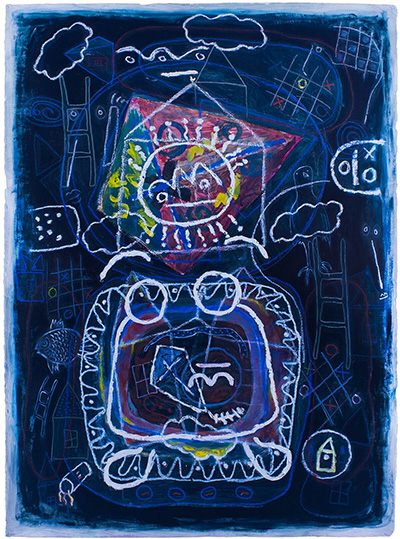 “Blue is my favorite color,” Newsum points out as he references his multilayered creations. Tacked to the wall or to boards, about ten to twelve new works are in various states of completion. “I’m always working on more than one thing. They tend to evolve.” In contrast to his usual brights and heavy use of primary color, these paintings emerge as if from a dream state, all black and gray with glowing pops of white, blue, or a vibrant pastel orchid that is difficult to categorize. “I like to be playful, invite the viewer. It’s about having an emotional encounter with color.” Newsum’s unique iconography and purposeful mark-making are built as if from a foundation, toward the viewer in a stream-of-consciousness order that brings together past, present and future seamlessly. I point to a photograph of Josephine Baker in one piece, and Newsum laughs, referring to a previous painting entitled, Josephine Sho’ Can Dance. It’s a method he uses frequently—photographing, collaging, and recycling old images into new works. For Newsum, these symbols stand in powerfully for larger concepts, much in the way a color or a mark can elicit an emotion. “The birds and the fish are free, they go forward,” he explains. “Ladders represent a second chance; ascension.” They are also highly personal. Newsum’s father was a firefighter in Memphis, and many family portraits are buried within the layers of his paintings. 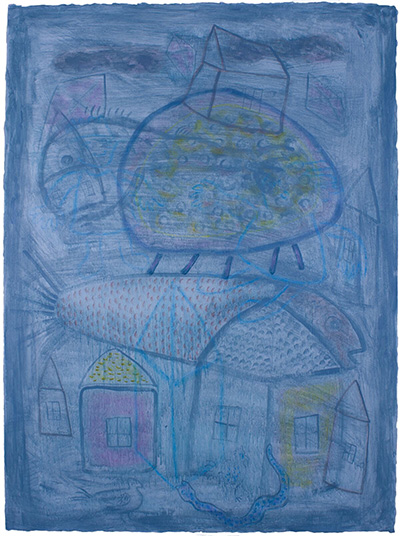 This intertwining of personal experience and larger historical events was at its height when Newsum created After the Flood CNN, the large painting that has been included in the preeminent Museum of African American History and Culture. “I had a personal encounter with that storm.” Newsum describes driving a van for his church, carrying people fleeing the aftermath of Hurricane Katrina. Houses, animals, TV sets, and ladders float in the blue and black ground of the painting. Newsum’s characteristic playfulness is in evidence, but it’s powerfully combined with an undercurrent of something darker. The television blares CNN in bold red, but it’s no match for the level of chaos created by the storm. The painting, donated by “The Van Fleets of Texas,” as its dedication reads, will be on view to the fortunate few who have already obtained passes to Museum.  Currently, a purple banner on the museum’s website declares, “Advance Timed passes through March 2017 no longer available,” a testament to the overwhelming desire for the narrative of African Americans in this country to be (officially) told.

These remarkable career feats may have broadened Newsum’s audience, but this was always the indefatigable artist’s goal. “I never wanted to be perceived as just a local artist,” he tells me, describing how he turned down a professorship in the early 1970s at another Texas school because he “wanted to do what the white art schools were doing at the time.”  In that case, it was nude figure drawing, a concept that boggled the mind of a conservative dean. And that seems to be Newsum’s truly outstanding trait, a single-minded clarity about his work and its purpose that shines like a bright beacon through every stage of his career. He easily references awards won in third grade for watercolor, his first art sale
(“to my Aunt Emily in high school”), gallery shows and public artworks. Like his paintings, there is one continuum where past, present and future intermingle. It’s this immediacy so evident Newsum’s work which creates a compelling freshness—a point of view that allows us to see the personal within the historical or allegorical.