A Ruckus Rodeo Returns to the Modern

When the Modern Art Museum of Fort Worth commissioned Red Grooms and ten other artists to contribute to the rodeo-themed 1976 exhibition The Great American Rodeo, Grooms spent a year observing rodeos, including the city’s annual Stock Show and Rodeo held at the neighboring Will Rogers Memorial Center.

Four decades later, the New York-based installation artist’s massive Ruckus Rodeo depicting the frenetic, emotional rodeo experience is on display through March 15 in a 14-foot-tall, 2,660- square-foot second floor gallery. Rodeo is what Grooms described in an interview as “sculpto-pictoramas”––part painting, part sculpture and part installation. The entrance is framed by a bow-legged pair of tight red jeans tucked into a set of blue boots etched with dark red. “Ruckus Rodeo” is scribbled on the figure’s back pockets. 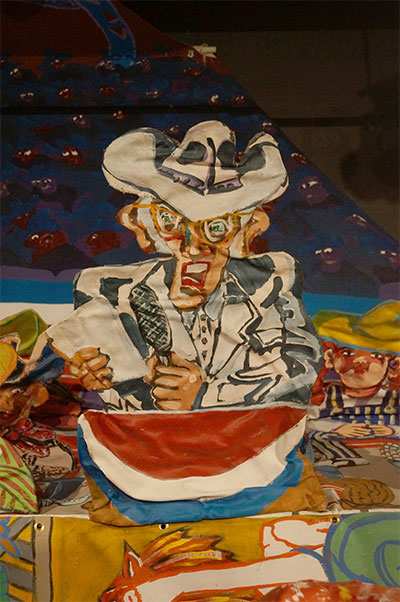 Burlap padding covers the floors, colored to look like the dirt, manure and grime of a rodeo coliseum’s floors. The burlap guides the visitor through a series of vignettes: Butter the Bull’s hooves up with the cowboy holding on tight; the Cowboy Queen trotting in, waiving a Texas flag with her Palomino behind her; and medics taking away an injured cowboy. They are surrounded by a barrel racer, clowns, bucking bulls, performers, and cowboys who are watched closely by judges and audience members on the perimeter in canvas draped out to depict faux stadium seating.

“It’s insane,” said Janelle Montgomery, the museum’s curatorial assistant. “But it’s an accurate depiction of what the Stock Show looked like in 1976.”

Burlap and canvas drape the walls, ceiling and floor. The three-dimensional figures are made of a variety of materials. Forming the skeletons is a fiberglass and fabric mixture known as Celastic, which, when exposed to heat or solvent, becomes bendable. After they are shipped to make the characters, sculpture wires are wrapped to harden the form. (Puppets and stage props are often made using this process, which also expands the objects’ shelf life.) For Rodeo, Grooms chose to slather the figures with thick acrylic paint from the primary color palette.

The name comes from his affiliation with the Ruckus Construction Company, a group of more than 20 artists in New York City, including Grooms and his former wife, the artist Mimi Gross. He collaborated with the group on other projects, including Ruckus Manhattan, a similarly sized picto-rama destroyed during Hurricane Sandy, and City of Chicago, owned by the Art Institute of Chicago. Rodeo was his only work created without Gross. She also contributed to the original exhibition. 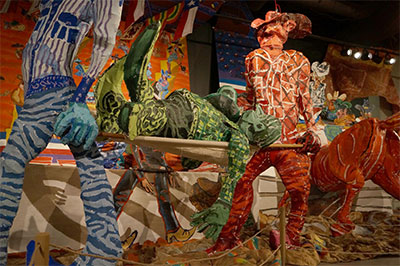 At the thirteen rodeos he observed upon taking the commission, he noticed all eyes are on the animals. The characters anticipate their next moves. The Rodeo Queen’s Palomino seems composed, Montgomery said, “but there’s a sort of glint in its eye, suggesting something could happen.” Perhaps the Queen will meet the fate of the cowboy taken away on a stretcher after he fell off his buck, or barely hold on, like the cowboy riding the gigantic Butter, the work’s clear centerpiece.

Outside of Fort Worth, the work was met with mixed reaction. A rodeo represents the quintessential American West, from the romance and independence to the troubling treatment of Native Americans. Dismissing the work as fun also mischaracterizes Grooms’ career.

“It’s not fair to dismiss the installation just because it’s fun,” she said. “He’s doing what Claes Oldenberg is doing, and we don’t take his work any less seriously.”

Grooms, she noted, was at the forefront of mid-20th century art movements. He was one of the earliest practitioners of film art. He was also involved with Allan Kaprow’s Happenings, loosely defined as temporary performance art pieces often without linear narratives.

But Grooms dismissed the idea that he was part of the Pop Art movement. “Pop was all about being cool, and I didn’t fit in with that,” he told John Ashberry in his essay for the Red Grooms: A Retrospective, 1956-1984 exhibition catalogue.