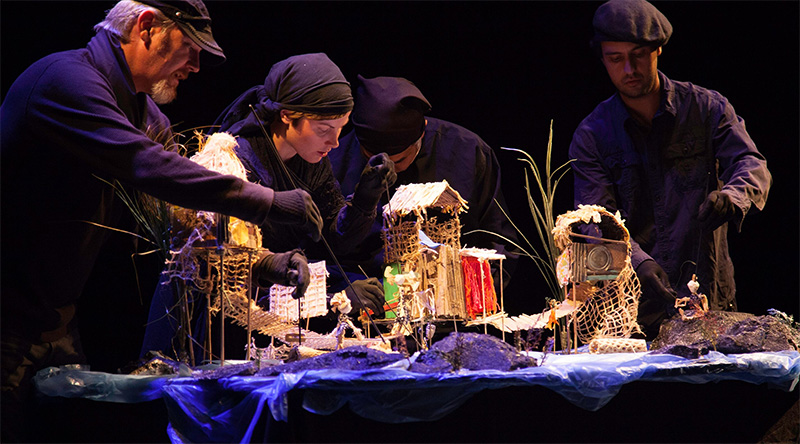 A Theater of Objects, Ideas and Ideals: Glass Half Full Theatre in Austin

Human-induced climate change, denied by certain politicians and often ignored by many, is a threat to every species on the planet. While awareness of the issue has increased, becoming a major talking point for candidates in the Democratic primaries, scientists anticipate coastal land loss, agricultural and economic collapse, shortages of both food and water, and an uptick in severe natural disasters. With this rise in awareness, there has also been an increase in the number of artists addressing the climate crisis in thoughtful and innovative ways. From Mel Chin’s digital Times Square flotilla in the app “Unmoored” to the Dear Climate project encouraging people to reconsider their connection to the rest of the world, the conversation around climate change continues to become more and more prevalent.

When done properly, works that address climate change can provoke a sense of empathy that helps the viewer shed a sense of individualism and open their understanding to the entangled-ness of humans to the physical world. This is not lost on Caroline Reck, the artistic director of Glass Half Full Theatre based in Austin, TX. She understands the importance of research as well as the significance of developing the audience’s connections to the findings.

“I had a college professor who once berated me for changing my major from History to Theater, because she assumed theater was all fantasy and greasepaint,” Reck remembered. “She told me I had a mind for research and I was ‘wasting my brain’ in theater. It hurt me pretty deeply, because I didn’t know how to defend my instincts for theater back then.”

Reck, though, merely wanted to find a means of presentation that suited her better, without dropping the reality that backed the work. “I’ve always loved research and study,” She continued. “I just want to present my findings through art and live theater, not in the form of a written paper. Writing words on paper makes me feel trapped, because I have to translate my ideas into a codified format that doesn’t really suit me. My drive is creating live visual performances that allow people to experience ideas in an empathetic, simultaneous way. That’s why our company tagline is ‘theater of objects and ideas.’”

Reck, as well as her company and collaborators, have dedicated themselves to organizing works of theatre that confront global issues related to environmental and social justice.

“I’ve always been driven by social and environmental justice issues in my work, but I used to be more private about the how and why I created work. I simply focused on making work about things my collaborators and I cared about, and didn’t think too much about describing that work to the world,” Reck said, reflecting on the beginnings of the theater, which started on a houseboat in France. “I’ve since grown accustomed to the idea that a lot more can be said and accomplished by sharing these details. I am not here to make theater for theatre’s sake. I’m pretty much only interested in theatre that has something to say.”

Recalling their first production in 2004 and the works produced since moving to Austin, Reck stated that the premise of each production is rooted in an issue that she and her collaborators wish to shed light on. “I don’t like to pound the audience over the head,” she explained. “Rather, when we are creating a new work, the issue we are exploring becomes the foundation upon which to build a narrative.”

Perhaps the best-known and most widely recognized of their productions is Once There Were Six Seasons, an interactive experience that invites the audience to explore lands navigated by puppets who struggle against violent storms, drought, and intense heat.

“I knew I wanted to use tiny puppets in moving dioramas to show the effects of climate change on cultures around the world,” Reck said, recalling the creative process behind the production. “I wanted to puppeteer the effects of climate change as well as the puppet characters to whom this is happening, to illustrate that humans are the cause as well the solution to this problem.”

Glass Half Full has orchestrated numerous versions of the production—for adults, for children, for festivals. The recognition the show has received, including a “Visionary Vivifier” Award from the Austin Critic’s Table and an award for outstanding sound design from the B. Iden Payne Awards Council, helped Reck realize how far we’ve come at least so far as awareness of climate change.

As Glass Half Full continues to organize productions, they remain focused on addressing climate change while bringing attention to other social issues as well. A forthcoming virtual reality experience titled Trash Trial/Trash Trail is a tongue-in-cheek trial of tomorrow where seemingly normal, everyday behaviors of the present are seen as negligent, wasteful, and inexcusable in the future, drawing a parallel to the “We didn’t know any better back then!” defense we often use to excuse our own ignorance.

“Climate justice affects every modern story, ever, if you look for it,” Reck explained. “So we’ve simply decided to make sure we highlight it in every show, no matter what the topic is.”