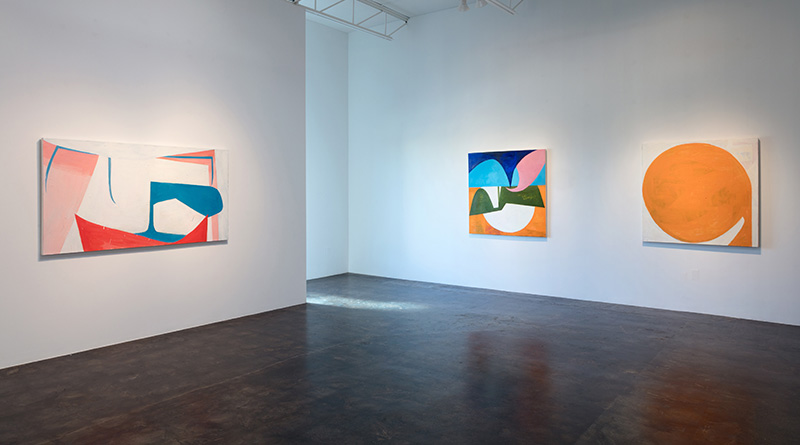 “I don’t really have a fixed idea when I start a painting,” says Houston painter David Aylsworth. The exhibition Wherefore & Hence, which runs through March 24 at Holly Johnson Gallery in Dallas, showcases works from the last two years in which Aylsworth has further refined and evolved his distinct style and approach to painting while also venturing into uncharted waters.

“I end up gravitating towards certain shapes, forms, and colors. In this show, a large number of the paintings seem to have the appearance of a landscape or seascape to them in an abstract way,” he says. “Previously my paintings occupied a shallow space or depth; now I like the idea of being able to read something in the distance, like looking across a big wide ocean for miles on end.”

Though innocuous and lighthearted in disposition, Aylsworth’s shapes and colors simultaneously feel worked and deliberate—more sculpted than painted—as if he slowly hacked away at the forms until the proper balance had been reached. To some extent, that feeling is true to form. He constructs his paintings layer after layer after layer, built up over long periods of time. Although the final paintings are all made of clear and distinct forms and shapes, the traces of the battle and the abuse exacted from the canvas are still visible just under the final painted surface. “The unifying thing theme for this exhibition was finding unusual and theatrical shapes that have characters and try and play them off each other,” he says.

The titular painting, Wherefore & Hence, like most of the paintings in the show, is constructed from six distinct colors that form the basis for the shapes. Utilizing repetition, symmetry, rhythm, and by contrasting the positive and negative spaces, Aylsworth creates a pleasant equilibrium from his elemental shapes and forms. The resulting harmony holds few surprises; rather, Aylsworth strives to create a balance, as though he’s desperately wresting the painting away from the chaos and uncertainty of the white canvas, “…layering over of stuff and ideas, editing and scratching out,” he says. “I like the balance of the canvas all those romantic notions of when you lay paint on a canvas.”

Aylsworth appears reluctant to weigh his paintings down with grand ideas and complex thoughts, choosing instead to let them be more lighthearted explorations of shape, color, composition. This is reflected in his titles for which the self-proclaimed musical theater geek uses lines from songs from musical theater. For example, the title of the show comes from a line in a song from the Operetta Candide.

“The reason I got interested in musical theater was just being contrarian,” he admits. “Most people I know don’t like that kind of music or say it’s really frivolous and not very serious. For me that was part of my attraction. Life doesn’t need to be quite so serious all the time. I started titling my paintings after show tunes—usually secondary lines within a song. My idea was that if somebody recognized that song, I would in a way be planting the music in somebody’s head while they’re standing there looking at the painting.”

His tendency toward theatricality and uncomplicated, almost innocent pleasure is reflected in his works. Aylsworth’s playful abstractions are indulgences in the act of painting—the result of a process that relies more on intuition and routine than on preconceived ideas and important themes. He lets the paint dictate the evolution of each canvas, layer after layer, feeling out the shapes and colors until the painting comes together. He adds, “That is what I’m trying to do with my paintings: I want you, the viewer, to look at them and feel something, maybe something you can articulate a little bit but not all the way.”

In many ways, Aylsworth’s paintings are anachronisms. These graphic abstracts of l’art pour l’art paintings appear, at first glance, to echo the modernism of the early 20th century. But maybe there is something to be said for his contrarian stance. Against the complexities of contemporary art that demands we take notice of the world around us, maybe we have we lost some of the simpler joys of spontaneous aesthetic expression. Aylsworth’s paintings rejoice in themselves, and in the craft of painting. They are whimsical in a world that feels ever darker and more serious. So, perhaps there is truth in the saying: Those who dance are thought to be crazy by those who can’t hear the music.