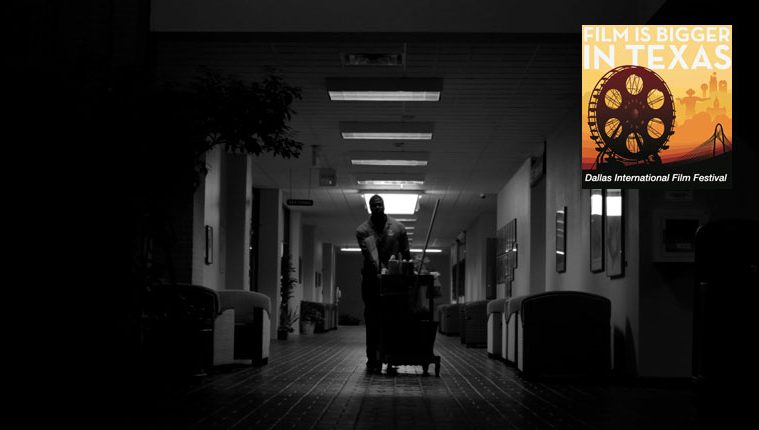 Shot in black and white, order the Texas premiere of “The Union Man” is a film short that documents the story of a former football player named Earl Thompson as he works as a janitor at night in a job that many folks take for granted.  Arts + Culture Magazine recently took part in a question and answer session with Director, look Bobby Lewis, Cinematographer, Andrew J. Nelson and Editor, Sara Masetti.

A+C:  What drove you to make this film?

The Union Man.
Earl Thompson pushes his cart during the late shift at the Union. Image by Andrew Nelson.

Bobby Lewis: It was for a graduate class at the University of North Texas. It was our second year and so it was stretched out over the period of two semesters.  Originally my treatment was a totally different film about people that clean and highlight the dignity in those types of jobs, but it was going to be like a visual symphony so a lot of movement of people cleaning and most everyone backed out of the film at the last minute. The day before we started shooting I actually met Earl, the guy in the film and I like to believe that everyone has a story and it just a matter of figuring out how to tell that story.  So I said to myself I am going to walk across the street and I am going to meet this dude and we are going to make a film about him. We didn’t really know anything about his life he just agreed to it.  The film evolved from a very elaborate treatment.

A+C:  Talk about your decision to shoot in black and white?

BL: The day before we shot I went to the Union where Earl worked to get him familiar with the camera and I shot some test footage in color.  It did not translate and everything felt current and it becomes dated so black and white kind of to me supported the notion that here is this guy… and it seems to carry the message a lot more.

A+C:  Talk about working Earl and how that was?

BL: Earl is great, he actually raised the bar for me because it was no ego and totally transparent and there is just a sweetness that permeated the whole thing.

BL: He was super accessible, he told me that if he had met me a few years before he would have kicked my ass, he was great and I felt a connection with him. I have tried for years to do something with music and it never happened so I know that feeling of being disenfranchised and doing a job that has nothing to do with what you want to do.  The vibe of the entire shoot was very relaxed.

BL: He was my Plan B.  As soon as I heard him speak I was like okay, there is the voice because he has such a rich great voice.  In documentaries you don’t really know what is going to happen and it scares a lot of people.  I like to open fire with the camera and see what happens and to me it captures the things you can never write and it feels safer. I get nervous when film is restricted by a treatment.

BL: The first day we shot we got in a room with Earl and put a mike and camera on him and I just asked him some questions to get a feel for who he was and [to get ] him more familiar with us and I knew the general idea for the story and no camera.  I put a recorder up to his mouth and you could hear the warmth of his voice and I asked him questions based on the information and really he pretty much led the interview.

A+C:  How close was the vision of “The Union Man” from when you were shooting it to the finished product?

BL: It was perfect, the same and it is exactly what I had hoped it would be. What I hoped it would be was something very accessible and not preachy that does not try to force a sad story down your throat.  This guy is not a victim, he is someone who believes and … at the same time it is pretty open and it applies to all of us.  To me, these guys [I worked with on the film] were spot on with what they saw in the film and it worked out.