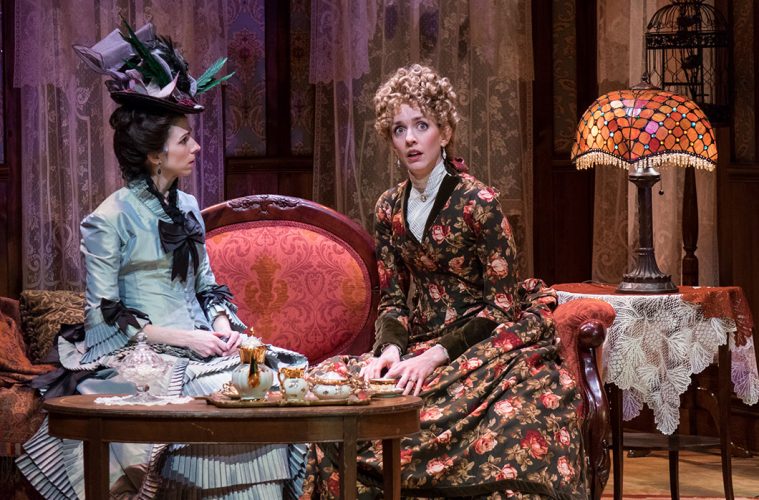 Acting in Texas: Jill Blackwood at the ZACH

Jill Blackwood takes on the role of  Mrs. Catherine Givings in Sarah Ruhl’s whimsical and sensual play, In the Next Room (or the vibrator play), at the  ZACH Theatre through Feb. 23. Blackwood has appeared in many shows at the ZACH, including Les Misérables, Goodnight Moon, Ragtime, Xanadu, Hairspray, Standing on Ceremony: The Gay Marriage Plays and The Drowsy Chaperone, to name a few. A regular on the Austin theater scene, Blackwood also performed with Austin Shakespeare, Austin Playhouse, the former Austin Musical Theatre, Zilker Theatre Productions and The State Theatre. She took the time before the opening of In the Next Room to visit with A + C Editor in Chief Nancy Wozny on her life as a working actor in Austin and the challenge and joy of being Mrs. Givings.

Arts + Culture TX: Is this your first experience in a Sarah Ruhl play?

Jill Blackwood: Yes, it is. I’ve never before performed in one of her plays, but I did see A Clean House at the ZACH a few years ago and really enjoyed that. I saw Barbara Chisom in that play. It was wonderful. 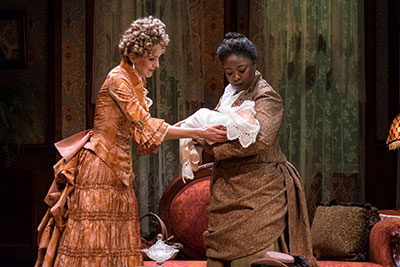 A + C: Ruhl is everywhere right now. Houston went on a Ruhl binge two years ago, and In the Next Room was a hit at Stages Repertory Theatre. UT’s Department of Theatre and Dance has a production of Ruhl’s Dead Man’s Cell Phone, Feb. 17-23 and at University of the Incarnate Word, Feb. 21-March. As someone who spends a lot of time on stage reading other people’s lines, you might have a deeper insight into the the mind of a playwright. Why do you think that she’s emerged as such a strong voice?

JB: We talked about this in rehearsal. Her plays have such a poetry about them. You identify with the characters, and you like them and relate to them, but there’s also this magical fairytale quality about them. She calls her plays “three dimensional poems.” She uses humor to bring out some of the deeper, darker issues and it’s unique in that way. Our director Sarah Rasmussen said that Ruhl likes to use musical theater actors for this play because they understand the heightened language and drama.

A + C:  Mrs. Givings is a great role, and you’re on stage most of the time. For me, it’s her story. I would like to hear your take on the role.

JB: I love this role. As soon as I read the play, I identified with the character and felt like I could tell her story. She’s ethereal, light and funny, but she’s also dealing with a lot of serious issues. She’s desperate to find connection with the people in her life, especially her child and  her husband.  At the beginning of the play, she struggles with knowing who she is and what she wants. By the end of her journey through the play, she can articulate what she needs from her husband. She’s also very spontaneous and funny. There’s something for everyone in this play. Her character is a good example of that, as she finds the humor and joy in everyday situations while also tackling deeper  issues.

A + C: What are those deeper issues?

JB: She is unable to nurse her new baby so they hire a wet nurse, and so that’s hard for her. She wants to feel effective as a mother, but there’s someone else bonding with her child, and she’s trying to find her place in that process and with her husband. They’re married and live together, but he’s focused on his work. They’re passing ships in the night. They’re not connecting and really seeing each other for who they are and what they need. You just get this feeling from her that she’s desperate for someone to talk with and someone to see her for who she is.

A + C: Without giving away the end of the play, do you think this is a good date play?

JB: It’s a great date play. Because of some of the things that happen in the show, it’s probably not a great “first date” show, that could be awkward, but if you’re in a relationship, this play will help you leave the theater feeling closer to the person you’re with. Maybe it’s not a good choice for a blind date either, but you never know. It just has everything, you’ll laugh harder than you’ve laughed in a while, and you may cry, too. It’s beautiful and magical and tender and sweet. 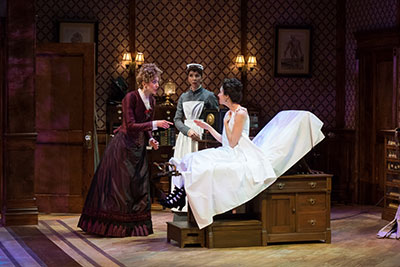 JB: When I was young in college, I had, like most actors, this vision of moving to New York. But I met a guy, married very young, he had this company and he didn’t have the funds to go to a different city. I had done an internship in New York and got to experience the city. I thought, there are opportunities here in Austin, and I’m going to make the most of it. I got my equity card, and have been so pleasantly surprised. I’ve gotten regular union work,  I feel like I’m part of a community or family. Austin theater community as a whole is a really supportive group.

A + C: How does the ZACH figure into this?

JB: It’s so exiting to be at the ZACH in such a time of growth. I remember performing on the Kleyberg stage, the older, original thrust stage. We were doing a production there and we had video projections from a VCR. It’s been wonderful to have been here through all of this change, and now perform on this brand new beautiful stage with all of this support from people I’ve been working with for years and years. It’s a family. Everyone plays their part so well.

A + C: You are lucky to have seen such dramatic change in your working conditions.

JB: Yes, I remember the very first production on the Topfer stage, Ragtime. There were several people in the production who have been involved with ZACH for 20 years, and to all be on the stage together, having worked together for so many years, seeing that dream come true together was really special for all of us.

A+ C: It seems as though Austin has provided the right ground for you then.

JB: I consider myself very lucky to be able to work the way I do. I think part of that is because I perform musicals and the theaters that can afford to do musicals can more regularly afford to pay equity contracts. I think that the more varied skills you have, the more varied you are, the better your chances are. There are so many great companies here in Austin right now and so many great actors and actresses. All of the Austin theater companies have a unique quality to their work that will help put Austin on the map artistically.  The ZACH is a big part of that.