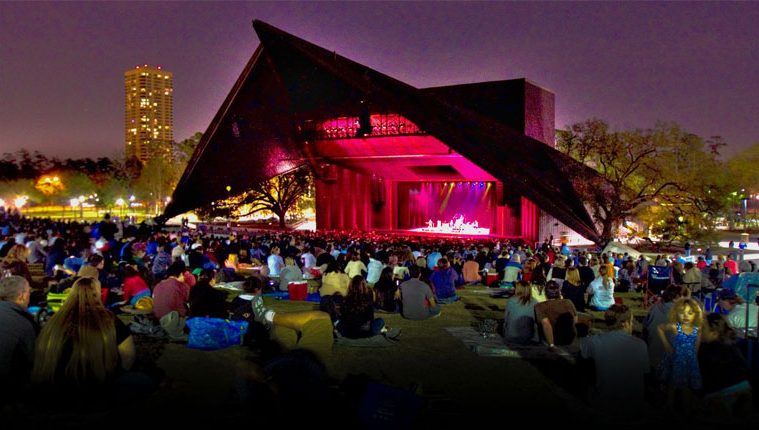 After All These Years

At 90, Miller Outdoor Theatre is still the Heart of Houston

It would be hard to pick an arts venue more beloved in Houston than Miller Outdoor Theatre in Hermann Park. Rising up from its grassy hill in one of the city’s lushest oases, it’s a space that inevitably inspires warm feelings from both the performing arts community and the Houston population at large. It’s not just because it’s the only stage of its kind in the U.S., a space where eight months of programming is produced and performed free of charge to its audiences; it’s not just because it’s an icon, having been part of the landscape for nearly a century.

It’s because Miller Outdoor Theatre is one of those spaces that seems to have a heart all its own. For 90 years, the theater has been synonymous with memories. Families have gathered there to watch outdoor concerts, plays and dance, introducing new generations to the performing arts.

“I remember being a camp counselor and I taught singing,” says Miller Outdoor Theatre Managing Director Cissy Segall Davis, “and we’d bring the kids out to Miller on field trips. And right after The Sound of Music came out, we led them out here, running up the hill, singing songs from the movie.”

“That’s the kind of thing you hear a lot of when you talk to people about Miller,” Davis says. “Everyone has a memory of this theater.” And as Miller celebrates its 90th anniversary, Davis says the place is getting ready to help make even more memories for the people of Houston. The season opens this month with Thoroughly Modern Millie, a madcap romp of a musical set in the roaring ‘20s, appropriate, Davis finds, because Miller opened in 1923. It’s also perfect for Miller: “It’s a big, energetic show with lots of tap dancing and singing,” says Davis. “This piece is just approachable fun and a family friendly way to start the season.”

Also on the Miller Stage this season will be the River Oaks Chamber Orchestra (ROCO) and the FrenetiCore Dance Company, both making their first appearances at Miller, as is Texas Southern University’s theater group. Back for the annual 4th of July Concert will be the Houston Symphony; returning as well are Theatre Under The Stars (TUTS), presenting A Chorus Line, the Houston Ballet, with a production of  Stanton Welch’s signature ballet, Madame Butterfly, and Houston Grand Opera, reprising this season’s La bohème. Davis says there’s also a host of cultural programming, from Cinco de Mayo festivities to the return of the popular Dancing in the Street…Motown and More to Indian and Asian dance. Davis is excited to see how the theater’s programming mirrors the faces of people in the city.

“Over the years, Houston’s seen a progression of diversity in population. And our performances have been able to capture that,” says Davis. “And we get to introduce that style of dance or music to everyone. For a lot of people, this may be the first place they see Bollywood dance or hear Asian drumming or learn what Folklorico ballet is.”

As the city’s changed, so too has Miller, which began its days as a facility, designed by William Ward Watkin  and built by Tom Tellepsen, with a classic Doric proscenium structure with a narrow stage flanked by 20 limestone columns and two live oak trees. Dedicated in 1923, the theater hosted outdoor band concerts, and even hooked up speakers so that audiences could listen to a boxing match broadcast over radio.

Long a summer gathering space, the Symphony began performing there in the 1940s. In 1968, when the current building was erected, with improvements to seating and the sound system, Theatre Under The Stars  presented its first Miller performance, Bells are Ringing, kicking off a 46-year run at Miller that’s still going strong.

Free programming as been a cornerstone of the Miller experience. Arts groups can apply for grants from the Miller Theatre Advisory Board to produce programming, and the theater receives a portion of the city’s hotel occupancy tax monies to help with production costs. Davis says making sure there’s a variety of theater, music, dance and other performing arts is important, both in terms of eclectic programming, as well as offering top-quality entertainment from a variety of producers.

And if variety is the spice of life, Miller’s 90th promises a lot. Davis says the official anniversary, May 12, will be a day of “surprises,” as well as the granting of an official mayoral proclamation about the theater.

“It’s just extraordinary that this is in our own backyard,” beams Davis. “And it’s such a gift for our city, that we have these incredible performances, absolutely free. I love the vibe out here, seeing families enjoying being together and watching great performing arts.”