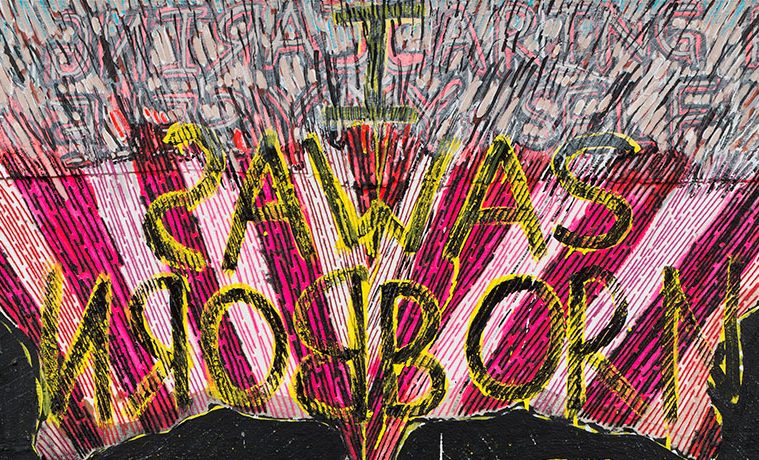 Alexandra Grant: Century of the Self

Self-described as an “essayist that paints,” Los Angeles-based artist Alexandra Grant is known for her consistent use of language. Grant’s new exhibition of paintings, collages, works on paper and sculpture at Lora Reynolds Gallery is both self-conscious and self-reflexive.

Borrowing the show’s title, Century of the Self, from Adam Curtis’s BBC documentary, Grant mines ideas from Freud’s seminal psychological texts, Sophocles’ tragedy Antigone andwork by writer-poet-activist Audre Lorde. This plays out in colorful text paintings, in which self-help-inspired affirmations—such as “I found myself,” “I see myself in you,” and “To thine own self be true”—are painted both backwards and forwards as if reflecting off one another in a mirror. 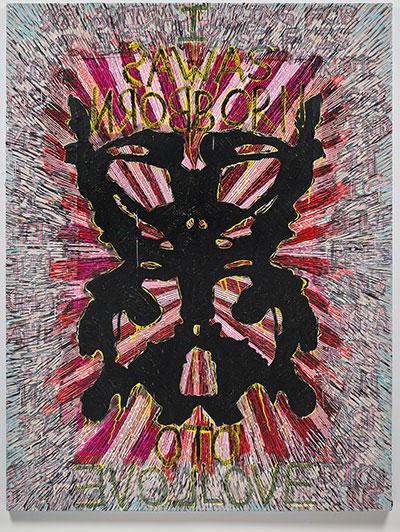 Alexandra Grant
Self (I was born to love), after Antigone and Audre Lorde, 2012
Mixed media on paper and fabric
96 x 72 inches
Courtesy of the artist and Lora Reynolds Gallery.

Each painting is adamantly layered with paint, fabric or both. Two large works on paper, Century of the Self (2) and Century of the Self (3), hang side by side in the main space. Blocked with text, bright colors, repeating marks, and Rorschachpatterning, thesepaintings are at once controlled and chaotic. Aesthetically, they act almost as tapestries, mapping out the artist’s inner questions. However, it is hard to get much from the cliché texts that Grant employs.

Much more seductive than the text paintings are two abstract paintings that directly reference Rorschach patterns. Grant’s repeated imagery of Xes and her layered diamond shapes are much more compelling than her texts, which by comparison are too forced.

For each of Grant’s solo presentations, she always adds in some sculptural component. The floor installation shown here, Site/Self, began as Grant’s personal collection of colorful, misshapen plastic objects she discovered in the trash of an injection molding company. Their bright and synthetic-feeling palette is similar to Grant’s, while their ambiguity allows viewers to see what they want in the twisted colorful forms, projecting themselves into the work—much like what Grant asks from her paintings, only with greater success.

Alexandra Grant: Century of the Self
Lora Reynolds Gallery
Through March 15