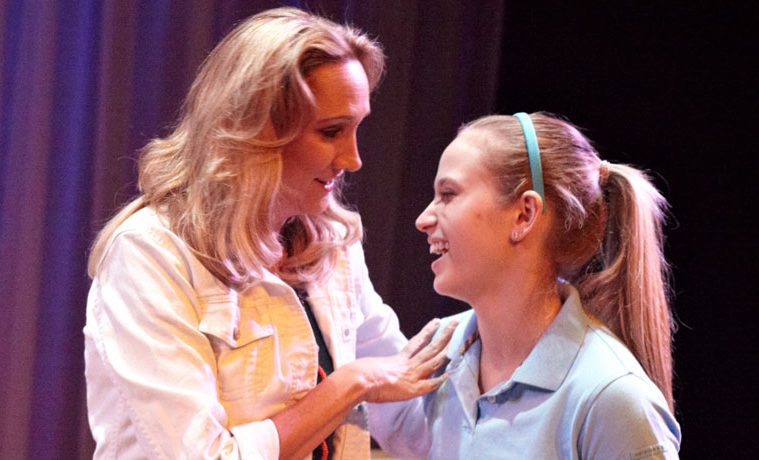 It’s always a pleasure to see a company present a regional premiere. It’s the sort of thing that makes you feel the people you’re watching take seriously their commitment as artists, that they’re paying attention to what’s happening on the scene.

For Stark Naked Theatre Company, it turns out to be double the pleasure: For, in addition to the fine performances showcased in its regional premiere of Anna Greenfield’s All Girls, the play itself is a telling work about girls and adolescence.

Greenfield’s play veers from hilarious to unsettling to moving. It’s a messy play, offering a window into what it feels like to be a thirteen-year-old girl — at times excited and looking with enthusiasm on life, at other times insecure about body image and hair, with moods that jump from kind to evil in the blink of an eye.

All Girls follows the story of Morgan, Jenny and Claude, all thirteen, on the cusp of entering high school, and all the struggles that come with it: whether to stay friends, how to grow up, how to express themselves and their sexuality. It’s also the story of Morgan’s psychiatrist mother, Mrs. Gray, who manipulates and plays the girls off each other, in an attempt to figure out who is the best for Morgan to continue being friends with, to better foster her five-year-plan for her daughter. That includes everything from being asked to the senior prom as a junior and early admission to whatever college she chooses.

The cast is first rate. Susannah Morgan Eig plays Morgan with biting mean-girl-ness, occasionally dipping into real pathos, and her final expression of the pressure she feels to be perfect and to be “anything but sad” is nearly gut wrenching. As Jenny, Amy Michelle Mire is delightful in showing her character’s insecurity and occasional bursts of spunky self-assurance. Victoria Villareal brings whimsy and warmth to Claude, an almost-young woman who still hangs on to the wonders of girlhood. Kim Tobin delivers a powerhouse performance as Mrs. Gray, in all her manipulative glory, offering commentary on both her own adolescence and the psyche of the girls.

Julia O. Traber directs the cast with sensitivity for the subject, hitting terrific notes. Jodi Bobrovsky’s set does wonders with natural wooden chairs and blocks painted in tones of pink and blue, augmented by Alex Jainchill’s lighting, warm and nostalgia inducing. Yezminne Zepeda’s use of children’s songs like “Old McDonald” and “B-I-N-G-O” was a nice touch.