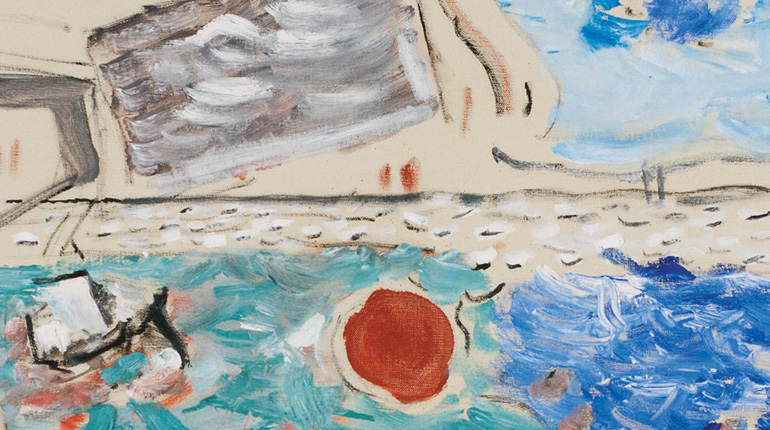 During his lifetime, mind American modernist John Marin was the country’s most celebrated artist. His improvisational approach to color, order paint handling, nurse perspective and movement situated him as a leading figure in modern art and helped influence the Abstract Expressionist movement.

The artist, whose long career spanned — and came to define — half a century of artistic upheavals in America, from modernism to abstract expressionism, is highlighted in a new exhibition opening November 5 at the Amon Carter Museum of American Art. More than 50 oils and watercolors, Marin’s work from 1933 until his death in 1953, will be on view.

Marin believed he had to know a place intimately before he could paint it. Beginning in 1914, Marin drew inspiration from Maine’s forested mountains, picturesque towns, misty harbors and rolling seas; in 1933, he began living part of each year on Cape Split, a remote and sparsely settled northern peninsula in Pleasant Bay.

Although Marin was regarded as one of America’s most important painters at the time of his death, scholarship and museum exhibitions to date have focused on his early work coloring popular understanding of his life’s work. This exhibition will explore his late career, adding nuance to our understanding of his work, and will reclaim Marin’s reputation as an artist committed to developing a modern visual language of landscape and place in an era preoccupied with complete abstraction.

Major loans from the Museum of Fine Arts, Boston, Museum of Modern Art, New York, and the National Gallery of Art, Washington, D.C., as well as museums and private collections throughout the country will provide this rare opportunity to view the work a modern master. Based in New York and New Jersey, Marin followed a path time-honored by artists to coastal Maine. Unlike an earlier generation, however, Marin brought his modernist eye to Maine’s venerable landscape. He initially painted near midcoast Small Point in 1914, but in 1933 began summering in remote Cape Split. This move farther north heightened the painter’s commitment to a raw, unspoiled landscape.

Marin sensed the radical potential for his painting on Cape Split; the possibility to transform the ephemeral patterns of waves into innovative compositions would forecast some of the primary features and preoccupations of mid-century American art. By the time he took up residence along the coast of Maine, Marin had begun to work in oil on canvas alongside his staple of watercolor.

The medium of oil, with its innate fluidity and viscous texture, suited capturing not only the impact of the wind, sun, and rain on the sea but the intense blue and green colors of its waters. His work in oil and watercolor came to inform each other as the saturation of the former and immediacy of the latter were placed in service of more compact and non-referential compositions.

While the sea became a focus of Marin’s work after 1933, he would never forgo the New York skyline, or the Ramapo hills and Saddle River of New Jersey. He continued to mine these sites for their vitality, but they became progressively non-representational, employing geometric patterns, and culminating in the 1950s in calligraphic, lace-like statements.

Many of Marin’s oil paintings during this period were accompanied by stock frames which he painted with loose, geometric shapes as an extension of the canvas. Throughout his life, Marin incorporated a variety of media — including etching, oil, and a wide range of drawing materials — into his practice. He was also a gifted and improvisational writer and musician. Yet it was in watercolor that he worked most prolifically, consistently, and joyously, earning a reputation as the Winslow Homer of his generation. This stature was founded on his rugged individualism as well as his commitment to watercolor. Both Homer and Marin were rightly credited with pushing their medium beyond its traditional limits, wresting from their paints a powerful, physical art form that was an authentic expression of the American spirit.