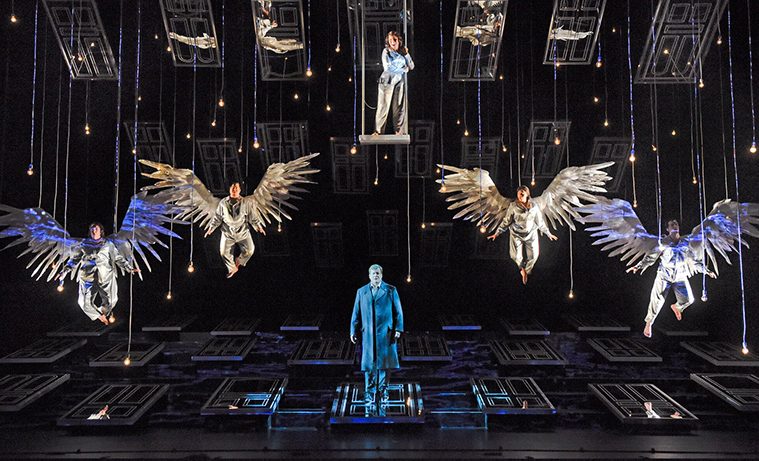 Angels in Houston: It’s A Wonderful Life at HGO 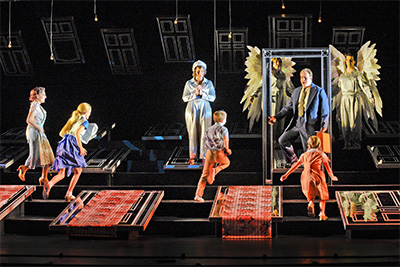 It’s the holiday season, which means we get all crazy about making memories with our family and friends. Perhaps it’s this insatiable urge that drives us to the same shows over and over.   Or maybe it’s curling up with the family to watch Frank Capra’s iconic 1946 classic It’s a Wonderful Life for the 25th time. Although I am more of a holiday channel surfer, who might linger for a few minutes on a favorite Wonderful Life scene, I totally get the need to squeeze more meaning out of the season via a favorite show. When we think of classics like A Christmas Carol and Wonderful Life and wonder why they are still around, it’s because their messages, “be better people,” still need to be heard. Maybe now more than ever.

After recently making the trek to Dallas to see Jake Heggie and Gene Scheer’s opera based on Melville’s epic tome Moby-Dick, I knew I was in good hands. I also suspected that I did not need to be a Wonderful Life freak or expert to enjoy this opera, which runs through Dec. 17 at Houston Grand Opera. And finally, I expected a fully re-envisioned treatment of this cherished story, which this team delivered in spades.

Although Heggie’s score has a seamless, cohesive thread, there’s enough variety to keep us engaged, from dance band swing of the 30s and 40s, to romantic sweeping cinematic music, to a patriotic march, and finally, the subtle whisper of a man asking for his life back. Scheer’s libretto will please the nostalgic among us, but also does a good job of telling the important details of the story. 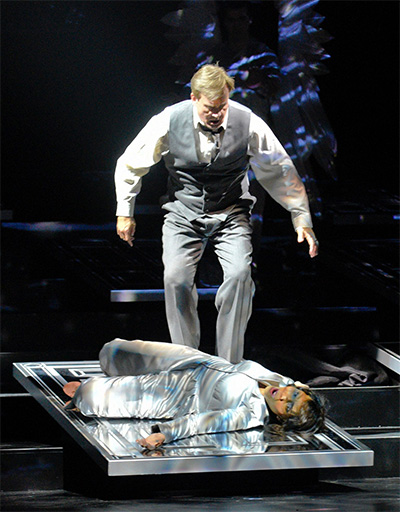 It’s a Wonderful Life starts and ends in the heavens, as the second class angel Clara (their take on the movie’s endearing Clarence) needs to move on up in the angel hierarchy and sees George Bailey as her big opportunity. Clara is a presence throughout, as it’s her discovery of his life that leads to her big promotion and her realization of what constitutes of life worth living. (Houston is experiencing the year of the Clara, as Stanton Welch’s new Nutcracker also puts the role of Clara front and center) This Clara, the magnificent soprano Talise Trevigne making her HGO debut, literally witnesses Bailey’s life, his good deeds, the impact of those deeds around him and the inter-connectivity of human life. Trevigne puts the wonder in Wonderful Life, embodying innocence, playfulness and joy.

Director Leonard Foglia keeps the drama moving at a lively clip, yet also leaves space and time for the opera’s heightened emotional tones. His striking stage pictures anchor key moments in the narrative. Set designer Robert Brill’s memory-scape pulses with floating rectangles that double as doors, windows, portals really, to Earth via Bedford Falls. A young Bailey scampers out of one of them, or later in the piece, they transform into homey beds for Bailey’s children. These portals are also mirrors, a visual reminder of the power of a reflective life. As much as Brill sets the opera in a cosmic place, the textures of an earthbound life seep through, especially through David C. Woolard’s period jewel-toned costumes. The feathered winged angels straight off of Catholic holy cards were old school for sure, yet also created a warm and fuzzy counterpoint to the starkness of Brill’s minimalist set. (If you are going to go crazy somewhere, do it with angels.) Elaine J. McCarthy’s projections of water and the starry universe take us from space to earth, amplifying the more ethereal aspects of the opera. 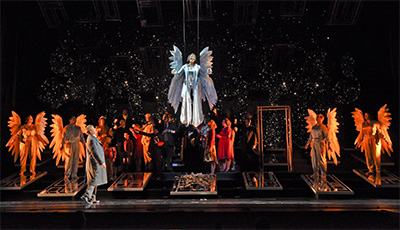 Brian Nason’s starry white lights also evoke an otherworldly place. His handywork is most potent during the “play within the opera” sequence, where Bailey and Clara switch from singing to speaking, and the atmosphere transforms into a ghostly dead space, visually and sonically, while a creeping low fog settles into the groundspace. It’s as if the stage becomes an airless, sealed vault. Now we remember that this is a holiday classic about the threat of suicide. Stripping the music and most of everything else reflects the dire and dark condition of a George Bailey-less world. When Bailey pleas to Clara that he wants to live, color, light and music return in the opera’s most stirring passage. 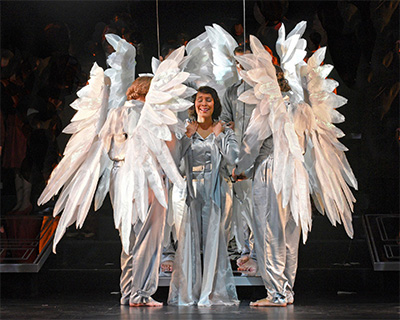 Under Patrick Summers’s baton the HGO orchestra sounded simply heavenly, rich with vivid color during the lively passages and full of nuance during the quieter sequences. Summers has a long history with Heggie; he has conducted the world premieres of all of Heggie’s major works. It’s an important partnership that continues with It’s a Wonderful Life. The evening ended with Summers leading the orchestra, cast and audience in a group sing of  “Auld Lang Syne.”

As much as Heggie, Scheer and the creative team made something stunningly new and original from this familiar material, the core message remained intact: live your life as if an angel were watching.