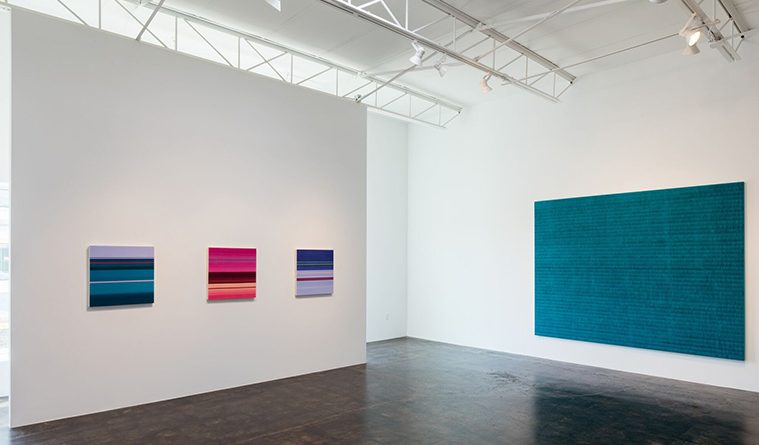 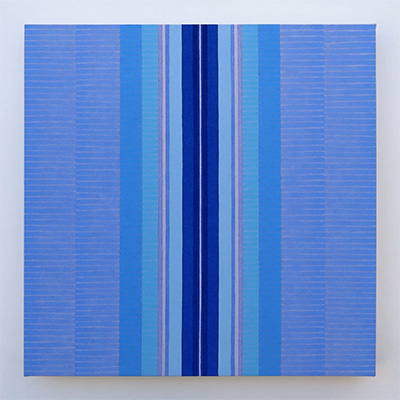 In Anna Bogatin’s second solo show, on view through July 30 at Holly Johnson Gallery in Dallas, twelve acrylic paintings executed in the last two years occupy the entry space. They seem to take hold of the gallery and attest to her unyielding, obsessive exercise in pattern through a wide range of colors. Clearly, the pieces are minimal and abstract, and when viewed from afar they look like stripe paintings. While stripes do play a decisive role, what makes her work special are the small nodules of paint she slowly lays down over unprimed canvas that soak into the substrate; these indicate a type of tantric and meditative rhythm, also directly suggestive of how Bogatin intends for them to visually affect and attract the viewer. In some cases she saturates the canvas with a thin mixture of acrylic before laying down the paint.

Bogatin was born in the Ukraine region of then-Soviet Russia and has lived in the United States since 1992. Her work is inspired by meditation techniques drawn from her deep interest in Buddhism, which explains why there is such a strong process-based aesthetic and quality to her almost-hypnotizing surfaces. The reductive aspect may remind some viewers of Agnes Martin, but here the strong use of color, and the tension generated by the pull between the horizontal and vertical forces distinguishes Bogatin from her forebears and illustrates an original style and vigor. She uses photographs, also taken from sources found in Australian Aboriginal art, as reference material, transforming them into the paintings whose subtlety demand close inspection.

In a pair of small (12” x 12 ”) gems BCL11 and BCL12, hues of purple and lilac surround strong vertical elements that define the center.  Prominent navy blues, light blues, and turquoise bring to mind bars of music that capture the play of light in the contrasting shades of varying amounts of paint. As good examples of this body of work, they show how the nodules of paint oriented as horizontal elements, in opposition to the center,  surround and populate the rest of the surface. Through her handling of the paint they also create subtle verticals, almost whispers, where they meet next to each other, barely in contact. 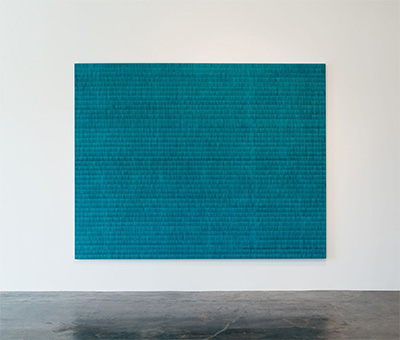 The imposing Untitled (Sea Wanderings 1008), fills 84 by 108 inches of canvas space with what looks like thousands of green nodules. In contrast to BCL11 and BCL12,  these are oriented vertically and form row after row of the small patches of paint. Imagine match boxes, standing on end with the thin side facing out, set one after another along a horizontal, then another long row set on top of them filling the entire plane. Between each green shape the light escapes only to contrast with a dark region formed between each row as they meet successively from top to bottom. Bogatin’s resolve and precision give this painting an inescapable visual surface that suggests the infinite in the same way that Buddhist shrines, with the overwhelming presence of statues and candles, signify timelessness and the importance of mindful awareness.

Between her first solo show and the one currently on display, the consistency of Bogatin’s work never wavers. Her aesthetic vision signifies the importance, now more than ever, of the possibilities of paint and the place where duration, sustained contemplation, and perception itself, meld within the realm of art.