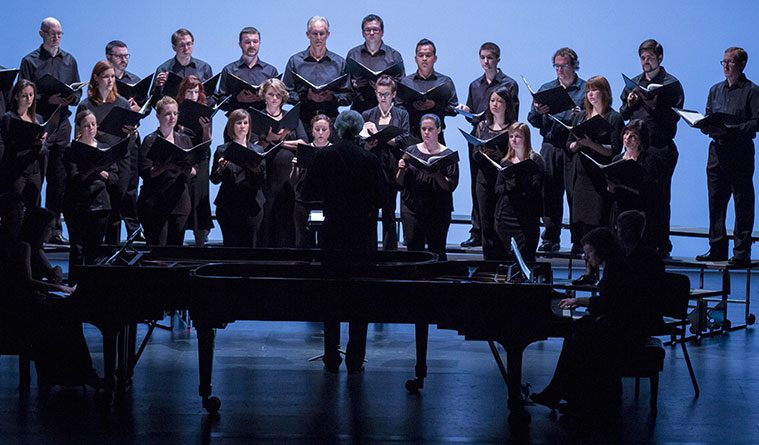 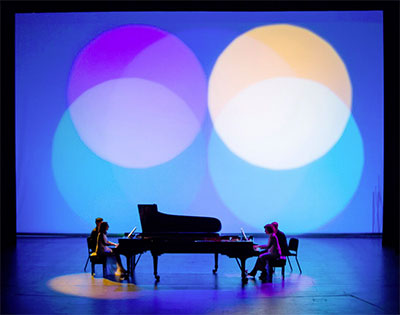 Imagine what must have gone on in composer Olivier Messiaen’s head. He experienced synaesthesia, which in his case meant that when he heard music, he imagined colors. He worked out a system linking the two senses in his music: One of his Preludes for piano, his program note says, is “velvety grey with mauve and green highlights”; the opening of another prelude “alternates green-veined orange with several black patches.” Trippy, huh?

Messiaen once composed a piece to accompany the play of illuminated fountains in a Parisian exposition. So Da Camera was just following his example turned his two-piano Visions de l’Amen into a son et lumiere with lighting by Tony Award-winning lighting designer Jennifer Tipton. In Messiaen’s program note, he invoked images ranging from the nebulous gloom before Creation to Saturn whirling through space to angels bowing before God. He ended the note with this multi-sensory effusion describing the Revelation-inspired finale: “sapphire, emerald, topaz, jacinth, amethyst, sardonyx, the whole rainbow of precious stones mentioned in the Apocalypse, sounding, jarring, dancing, coloring and perfuming the light of Life.”

In Sacred Visions, a collaboration with Houston Chamber Choir, pianists Sarah Rothenberg and Marilyn Nonken tackled the Biblically inspired keyboard spectacular with commitment galore, and Tipton’s lighting at its best added arresting images. But the music paid a price for the stage setup the lighting required.

Magenta light flooded down onto Rothenberg, Da Camera’s artistic director, as she and Nonken dug into that ringing finale May 2 in the Wortham Theater Center’s Cullen Theater. But Tipton’s illumination played out mainly on the cyclorama at the rear of the stage. 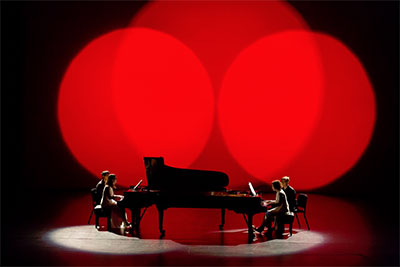 During the opening “Amen of the Creation,” a six-minute crescendo evoking light’s arrival in the universe, a circle as large as the cyclorama could hold brightened from amber to gleaming white. Alongside the lusty dance of “Amen of the Stars and of the Planet with Rings,” primary colors interacted boldly as two smaller circles overlapped with the big one. A small, deep-red circle surrounded by black accompanied the somber close of “Amen of the Agony of Jesus.” The big circle, by itself again, glowed pale pink during the dulcet beginning of “Amen of Desire.” During the fierce “Amen of Judgment,” stark white washed down onto Rothenberg and Nonken and blazed from the cyclorama.

The lighting enhanced the music in all those spots. But as Messiaen’s tone-paintings unfolded – ranging from hypnotic stillness to ecstatic energy, enriched by imitations of bells and birdsongs, embracing sweetness as well as clangor – visuals limited to motionless tinted circles and a textureless background began to seem rudimentary by comparison. Yes, the overlapping spaces of the big circle and four smaller ones provided an array of colors in the final “Amen of the Consummation.” But even that seemed staid alongside the music’s clangorous jubilation.

Rothenberg and Nonken played with vigor, spaciousness or delicacy as the music demanded it. In “Amen of Desire,” Rothenberg’s gentle touch enabled her to savor the honey-and-lemon tang of Messiaen’s lyricism; in “Amen of the Consummation,” her incisiveness and clear tone gave the big chords of Messiaen’s creation theme a triumphant ring. But putting the pianos where Tipton’s overhead lighting could reach them meant situating them well back on the Cullen Theater stage, with no acoustical shell to aim their sound toward the audience. That took away some of the pianos’ fullness and force – a big loss in a work that delivers part of its message through sheer, visceral power. 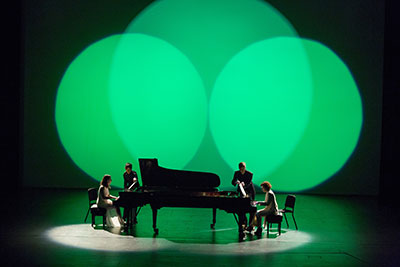 At least the raised piano lid must have helped aim the sound a little. Even that boost was absent in Igor Stravinsky’s Symphony of Psalms, where Rothenberg and Nonken played a two-piano condensation of Stravinsky’s orchestration. So the pianos, with their weakened sound, couldn’t compensate for the absence of Stravinsky’s bracing instrumental colors. The setup put the Houston Chamber Choir and conductor Robert Simpson at even more of a disadvantage: They stood all the way at the rear of the stage, with no shell to help the voices project. Even though the group sang precisely, it sounded distant and small. Stravinsky’s bracing energy hardly came through, and the cyclorama’s bluish-white light only added to the air of detachment.

The short piece that opened the concert not only showed the choir off better, but may have been the most atmospheric part of the whole affair. With the curtain down and the lights low, the choir processed silently onstage in front of the proscenium, each singer holding a luminaria glowing the bluish-white that would return for Stravinsky. Stretched in a single line across the stage, the choir sang Tristis est anima mea, a meditative a cappella piece by medieval composer Carlo Gesualdo. In moments, the choir’s purity and Gesualdo’s poignancy took the audience into another world.