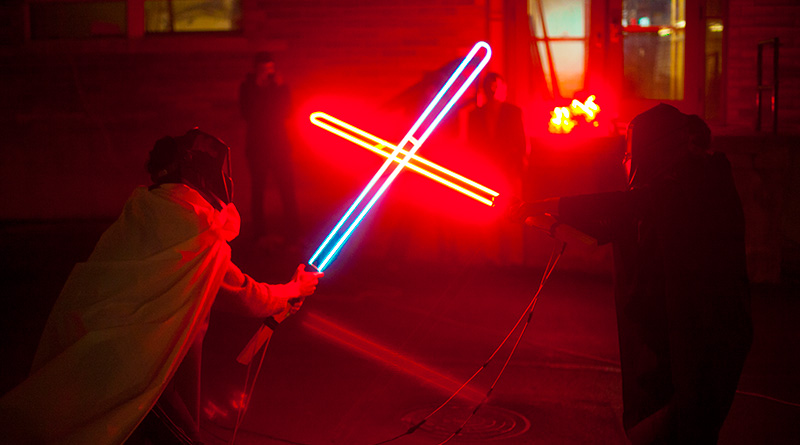 A shop owner flips a switch, sending a few thousand volts through glass tubes bent into the shape of the letters O-P-E-N.   As an inert gas within the glass is electrified, the letters begin to glow an orange-red, signaling to potential customers that the shop is officially open for business.

Many store owners, restaurateurs, sign-makers, and other businesses switched from neon to fluorescent or LED signs long ago, but the aesthetic continues to enchant people. The lighted signs have a particular appeal that many people associate with a range of experiences, from small town bars to Route 66 to big cities like Tokyo or New York, bustling with different kinds of activities and aglow with advertisements. Just picture a sign blinking as a noir detective drops his cigarette in front of a shady business.

“There’s this kind of resurgence for neon in pop culture,” said Kathryn Hall, curator at the Houston Center for Contemporary Craft. “It might not be used in the same way, but there are constant references to it anywhere from graphic design to movies. Artists have been drawn to it for quite some time as well.”

Hall says this resurgence of activity shows an increased interest in materials but also notes those materials are equal parts craft and science, and require specific skills and knowledge. “As a craft, neon and plasma are very intriguing. The tubes used to construct the works must be crafted by hand and, to reach their true potential, require an understanding of how the different noble gases function and what effects they produce,” she explains. “The artists in Light Charmer work with the interplay of light and sound, experiment with blown glass, and harness the energy that neon and plasma have in a way that’s incredibly exciting for a material that’s been in decline commercially.”

HCCC often looks at how artists are recontextualizing everyday objects to elevate them beyond their typical status. From chairs to dishes to jewelry, artists at HCCC experiment with the purpose and meaning of objects, exploring their relationship to the world while finding new ways they can be viewed, considered, and appreciated.

While there are many visual artists who use neon in their work, they tend toward the familiar form of letters, with the material taking a backseat to the written message. In the 1960s, Dan Flavin was one of the first artists to bring neon light into a gallery setting, poeticizing a maligned material by exploring how expressive it could truly be. Since then, there have been many artists who’ve made use of the trapped gas. “As material, neon and plasma have kinetic and performative aspects to them that many visual artists don’t explore,” Hall stated.

The artists in Light Charmer, however, look closely at neon and plasma as form and subject. The works in the exhibition aren’t necessarily kinetic in the traditional sense; instead, movement occurs at the core of how the pieces function, with the gases becoming active as soon as a switch is flipped. For example, Michael Flechtner, an artist based in Los Angeles, creates 2- and 3-dimensional sculptures as well as neon wearables. His piece Clifford, the little Neon Dog is a neon sculpture animated by a motor instead of an alternating current. While many neon signs close and open circuits to produce an effect of motion, this small motorized dog consists of neon-outlined limbs brought to life by mechanisms.

Neon, though, is inherently kinetic. The glass tubes are filled with excited molecules brought to life by a pulse of energy, even when they appear static, motionless. Verisimilitude by Lily Reeves is a video work featuring the artist and collaborators performing actions with a series of glowing neon hoops. The subjects move through and around the hoops in actions that are peaceful at some moments and erratic during others. The video seems to explore the relationship of the world and the body to the material. Although the hoop is motionless at times, an electrical charge runs through its interior to produce an eerie, dim light. In conjunction with the opening, Reeves will conduct light healing sessions as part of her performance piece Methods of Healing. She will also present a collaborative work with James Akers titled Neon Sword Fight, a battle between the two artists featuring sword-like sculptures.

In some of the other works on view, the “spectacle of movement” is implied, letting our minds fill in the blanks and pauses. Kate Hush, a Brooklyn-based artist, repurposes the neon sign to examine female stereotypes and the male gaze. Drawing on cultural references from the heyday of neon’s commercial use, she finds moments that depict women as “unreasonable” or “unstable,” creating ambiguous sculptures that leave viewers to guess whether they are just a little unsteady or a full-blown femme fatale. In I’m Gonna Wash That Man Right Outta My Hair, glass tubes are bent into the shape of a woman washing her hair. Lines, or drips, of red run down her head, neck, and shoulders, forming large drops on her chest. Whether the title is literal or metaphorical—and what, exactly, about that man needs to be washed away—is up to you.