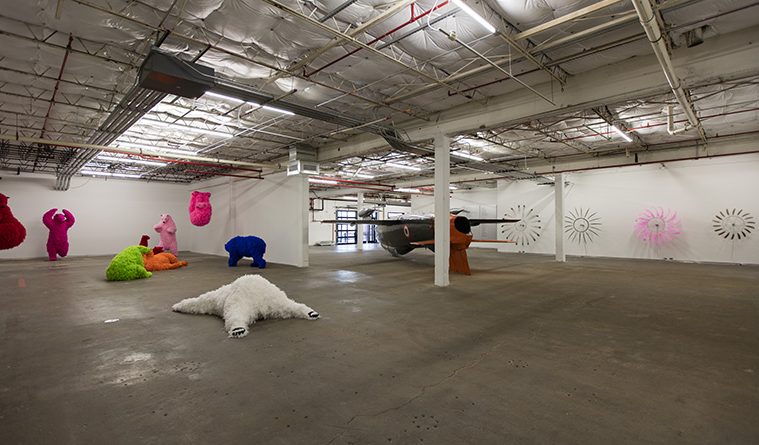 Art Out of Water: Paola Pivi at Dallas Contemporary 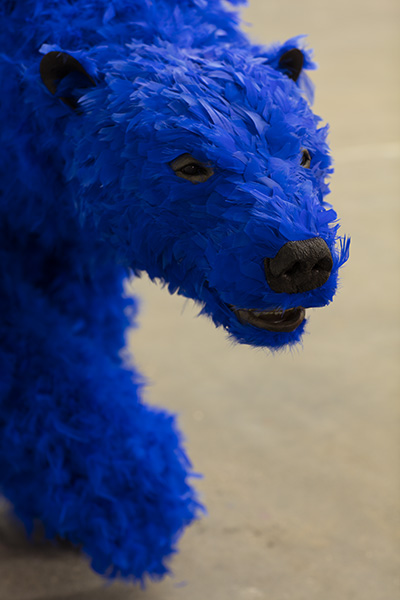 As museums today compete for social media attention, Dallas Contemporary currently finds itself pulling ahead of the pack thanks in no small part to Paola Pivi’s Ma’am (on view through August 21). Even as exhibitions in the controversial space grow more polished, the sheer enormity of it often invites installations that are larger than life and immensely photographable. Pivi’s playful approach to art making is no exception. In this enormous show—her first U.S. solo museum exhibition—the varied works compete for photographic attention over clear interpretation of content.

Nine life-sized polar bears in bright colors like hot pink, sapphire and lime green strike various anthropomorphic poses. Step close and stare the bears in the eyes and experience a moment of fear; step back and find yourself giggling. The blue one, which Pivi titled It’s not fair appears to be snarling. A white one, slumped to the ground, looks like he’s had a long day. Visitors have typed out captions of their own: “#today” or #currentmood.” Pivi’s work invites and encourages these projected, personalized interpretations. Her art, while occasionally (perhaps intentionally) befuddling, is impossible to resist.

That white polar bear which, like its compatriots, is bedecked in feathers rather than fur, sits in the line of sight of visitors walking into the exhibition, directly behind an overturned Fiat G-91 fighter jet. These intersections of fabricated natural life (the bears) with fabricated fabrication (plane) simultaneously beg for and obscure interpretation. In this way, Pivi’s works fit perfectly into the reductive but useful world of Instagram, offering a glimpse of the story but never fully explaining. 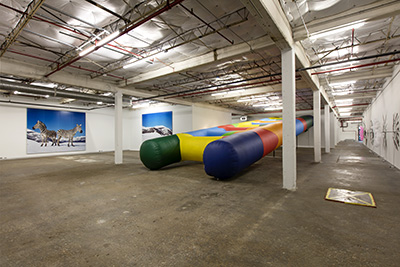 Much of the other sculptural work in this show—which also includes a buffalo in a pile of coffee beans, a relief of thousands of pearls and a huge blow-up ladder in rainbow colors—reveals Pivi’s interest in placing things out of context. Her earlier photographic work, also on display, includes images of zebras in snowy mountain ranges and a lone donkey on a canoe in the middle of a body of water. A connection could be drawn between the artist’s own interest in placing herself out of context, as she once traveled to Alaska to spend time with a dogsled team and stayed for seven years.

Taken as a whole, the works seem disjointed, the result of a wandering mind rushing from one idea to the next. A series of spinning wheels line the wall that spans the entire exhibit, many of them bicycle wheels with an individual feather standing erect from the center of the spokes, rustling in the occasional breeze from the wheels spinning. Here again, everything is out of context, which is perhaps exactly the point. 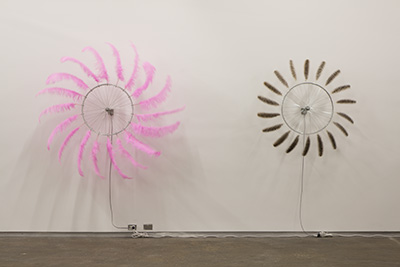 The exhibition is one of sensory pleasure and inexplicable discovery. Pivi uses an artistic vocabulary that seems to be in her own secret language. To enter her world is to expect discombobulation and moments of total glee. In those moments, snap a picture; you’ll want to show the way it made you feel.