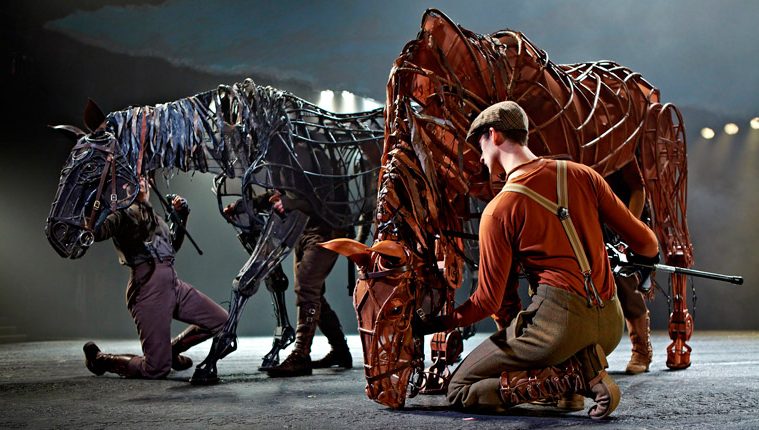 As the Story Unfolds

As magically compelling as the Tony Award-winning play War Horse is to watch, story it’s also a fascinating study in narrative evolution. But for acclaimed children’s writer Michael Morpurgo, order the man who first set the story down in 1982, try that’s just as it should be.

“[Stories] are like autumn leaves,” remarks the soft-spoken London native. “Once they fall off your tree and other people pick them up, you have no control over them.”

British playwright Nick Stafford adapted War Horse for the stage from Morpurgo’s novel of the same name. Four years after it premiered on the West End in 2007, Steven Spielberg released an Academy Award-nominated film version of the story which centers around a boy named Albert, his horse Joey, and the Great War that separates them. Now the play, which has been touring the U.S., will open for a two-week run at the Winspear Opera House starting on September 12. And it’s traveled a long way from the serendipitous conversation that was its genesis to get to Dallas.

Morpurgo had just moved to Iddersley, the small Devon village where he still lives with his wife of 50 years, Claire. One evening, as he was sipping his favorite beer at the local pub, he began chatting with one of the town’s three surviving World War I veterans.

“He told me about a horse he’d known out in France that had become his best friend,” the novelist recalls, his hooded blue eyes thoughtful. “He talked to this horse and told him what was important to him — his fear, his longing for home. And he found this relationship sustaining.”

Moved by the old man’s story, Morpurgo did some further research at the Imperial War museum in London on what the veteran had told him. He found out that one million horses — many of which had come from the United States and Texas — had gone to war and that well over 900,000 of them had died. This number was in addition to the ten million recorded human casualties.

A story soon began taking shape in Morpurgo’s head. But he had a problem: how would he be able to tell a story of the universal suffering the war brought to all participants?

“I thought that horse’s point of view would be neutral,” he explains. “He or she could listen to the British soldiers talking along with the Germans and the French. The story would be through the eyes of a totally innocent victim.”

But before Morpurgo could fully buy into the idea of horse as narrator, he found that he had to actually believe that a horse could be sentient. That moment came when the novelist observed the behaviors of a severely speech-impaired boy and a horse he owned.

“The boy hadn’t spoken in a couple of years,” he says. “And then, one night, I witnessed this boy opening his heart and letting the words flow out to the horse. When I observed the horse, I realized that he wanted to stay by the stable door, listening, even though he didn’t understand what he was listening to.”

War Horse enjoyed only limited success after it was published. Between 1982 and 2007, the year Nick Stafford’s dramatic adaptation premiered in the West End, the book only sold 50,000 copies. Since then, however, the book has become a New York Times Bestseller and sold almost one million copies.

Morpurgo was involved with the stage version from the start. In keeping with his modest demeanor, however, he’s quick to refuse any credit for what emerged from his collaboration with Nick Stafford and the National Theatre of London or with the Handspring Puppet Company, the South African firm that designed the magnificent life-size puppets used to play the horses. By contrast, the film used real and animatronic horses.

For the most part, the play stays true to the novel. It even manages to suggest the horse’s perspective by not telling the story from any particular character’s point of view. Perhaps even more amazingly, the play creates believable human-horse interactions between the speaking actors and the silent ones who manipulate the horse puppets.

“The principle that we are following the story of this war through the horse is retained and very powerful, but only because the quality of the acting is extraordinary,” Morpurgo says. “I think it’s really hard to act around a puppet.”

The writer attributes the renewed interest in War Horse, which he sees as an anti-war novel, to changes in the historical climate. For him, the 1980s were — at least for Britain and Western Europe — a time of forgetting.

“We were done with the World War II and wanted to forget it,” he says. “There was this ghastly nuclear threat hanging over us, but no one was coming home in coffins. After the Cold War was over, the world splintered into nasty little conflicts everywhere. And the sharp bits created these horrible wars that we are still involved in.”

While the novel and play emphasize the importance of remembering history, the play is haunted by the specter of a past that continues to repeat. In the stage version, as Albert leaves his country home to join the war and find Joey, his father hands him a knife that Albert’s grandfather carried in the Afghan War.

His quiet voice rising with emotion, Morpurgo says, “There we were, 150 years ago, going to war in Afghanistan. And what are we doing now? And when will we ever learn? For me, the play represents a longing for peace.”

Reprinted with permission from our media partner TheaterJones.com.