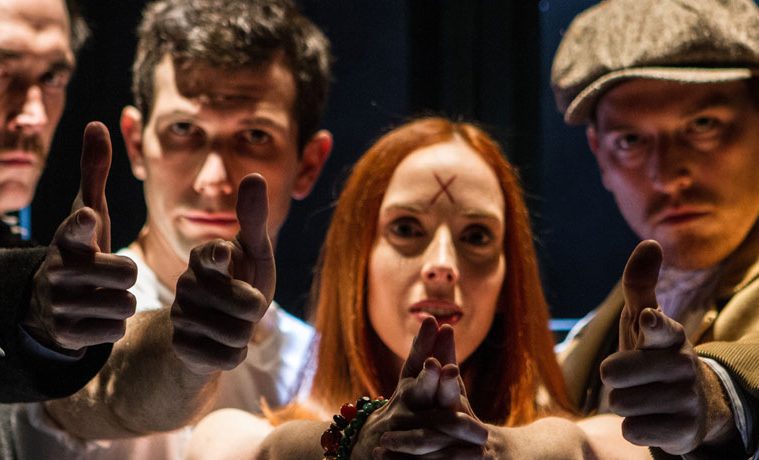 Gun control, assassinations and carnival games. Theatre Three’s production of Assassins opens with timeliness three-fold, mounting the same weekend as the State Fair of Texas, and running just a month before the 50th anniversary of John F. Kennedy’s assassination on Dallas’ grassy knoll.

This Tony-award winning Stephen Sondheim musical, with a book by John Weidman, debuted more than 20 years ago, employing a murderous midway as the otherworldly meeting place for history’s would-be presidential assassins. In 1991 before Assassins hit Broadway, Theatre Three staged this kooky, dark comedy and they prove once again that it belongs in the company’s wheelhouse. A solid cast, a creepy set and some stellar musical direction bring this show to life.

Designer David Walsh transforms the awkward theater-in-the-round space into a zany milieu, with a creepy figurehead puppet for president and a spinning, devil clown that lights up with every fatal shot. On this set, the cast of characters conspires and complains. Each famous killing, or failed attempt, begins with an expository song with an era-appropriate feel. Before John Wilkes Booth (a delightful Gregory Lush) shoots President Lincoln, the balladeer sings a jig, The Ballad of Booth, which bears strong resemblance to the little ditty that opened Disney’s Davy Crockett mini-series.

And so the musical chugs along, explaining or hypothesizing the motives behind everyone from the plebeian anger of President McKinley’s assassin Leon Czolgosz (Brian Lewis) to the genial loneliness of Samuel Byck (Terry Dobson), who aspired to hijack a plane to kill President Nixon. The play’s penultimate scene takes place in the Texas School Book Depository, a location all too familiar for Dallas audiences.

Throughout the musical, these killers stumble across one another in scenes, serving as inspiration for the later generations or simply a sounding board. While these scenes are mostly trite and silly, they offer the play’s only significance, as they reach for motive. The thesis crafted by Sondheim and Weidman seems to be that these assassins are only pursuing the American dream: fame. It’s a bold attempt to put a face on the killers, while stripping away the person of the President.

In that regard, Assassins is incredibly unpatriotic, which could be a very clear, thought-provoking stance. But then in the final song, Something Just Broke, the everyday bystanders in the musical relate where they were when they heard that a president was shot. This song was presumably absent from the 1991 Theatre Three production, as it wasn’t added until the London run in 1992. While it ties a little bow on the otherwise dark musical, it’s really just a resounding cliché. After nearly two hours of connection with these public enemies, the musical ends with bland navel-gazing.

But the flaws of the musical are not the fault of Theatre Three. Director Bruce Coleman and his cast have crafted a timely, audaciously good musical.