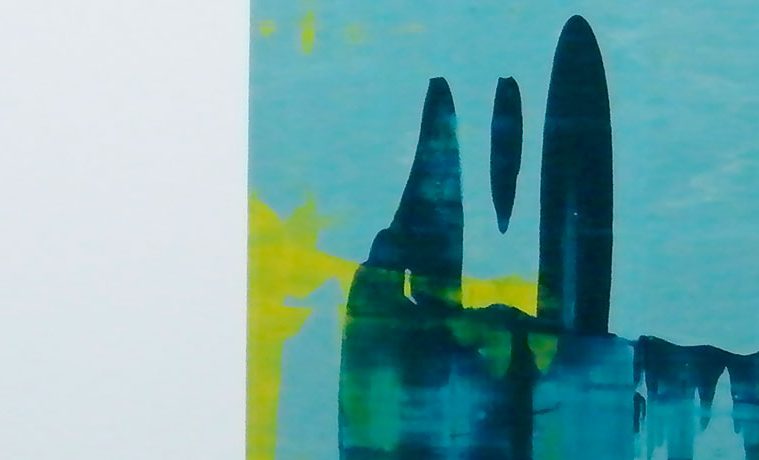 The Ant Colony in Oak Cliff is a new exhibition space interested in propagating the efforts of growing artists.  The founder, Manuel Pecina, had frustration showing as a relatively unknown artist, and not wishing this challenge for others, he has established a venue with the mission of alleviating this predicament. Since such hurdles are pervasive in art business, the Ant Colony is doing something proactive about them, holding their door open to artists at any point in their career trajectory. The more established side of such is the case with their current exhibition, Ayman Alamoudi’s Machinic Code. 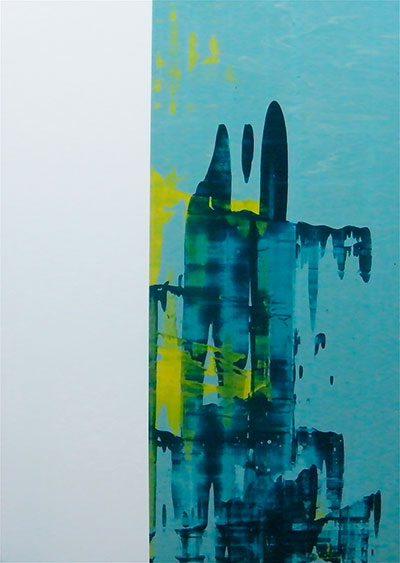 The body of work in Machinic Code consists of oil paint-on-aluminum wall pieces and an interactive real-time projection. The former depict prescribed repetitions of actions for applying, moving and removing paint along a surface, the negative spaces of which converse with the dictation of time: current, past and future.  This painting procedure, much like a program, forms a process and illuminates relationships between incorporated elements such as the aluminum substrate, paint and the artist’s body.  Alamoudi develops this relationship through his paintings; they combine sinuous motion with sinewy surface and luster, not unlike the interiors of our own fleshy machines which oscillate among varying solutions to ongoing challenges. These paintings converge with the viewers calculated and organic observances that seem to command the artist’s solution of experiences mediated by mechanical means.

Another resolution Alamoudi offers in the present-tense is in the form of an interactive projection entitled “Body Scan,” in which a computer’s camera scans the area in front of it and projects the image in an adjacent room.  The image is delineated into segmented vertical lines, yielding a nearly recognizable abstraction of the subject, or scene, presuming said scene (or subject) is still.  The scanning process is slow, so motion augments the image capture in varying ways. The projection is then cast onto heights of freely-hanging translucent fabric, suspended from the grand ceiling of the adjoining room.  Again, possessing a palpable visual component in surface, this digital (and truly machine-mediated) representation appears softer in focus, and further from the human subject(s) that compel its creation.

Motion prevails as a mechanism that propels this repertoire: motion that translates from the artist, his body and his mind, on to the audience.  Machinic Code maintains gravity of contrast by presenting these seemingly contradictory interpretations of humans’ participation with technology.  With so much of our experiences mediated through machinery, our push-and-pull relationship becomes paradoxically translated through Alamoudi’s means.