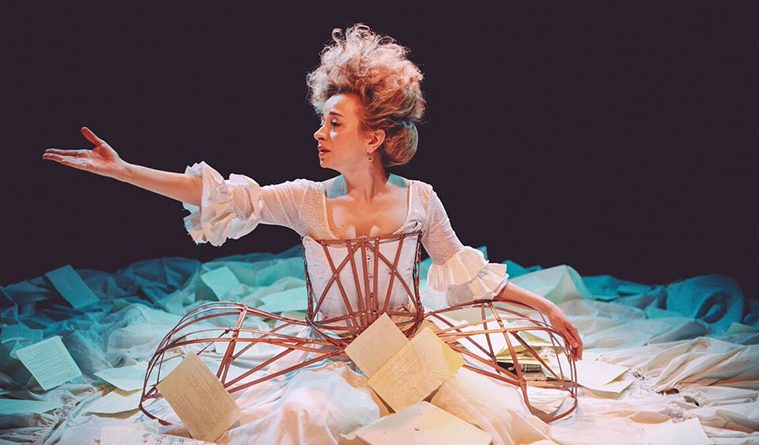 Becoming Nannerl: The Other Mozart

Silvia Milo in The Other Mozart.
Photos by Charlotte Dobre. 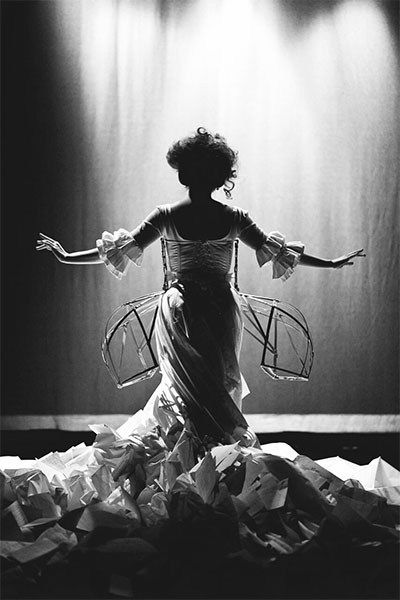 The story begins with a portrait by Johann Nepomuk della Croce of a family: father, son and a daughter with spectacularly big hair. That image of the daughter, Maria Anna (Nannerl) Mozart–her arms crossed with her young brother, Wolfgang, as they played the harpsichord–was what arrested the attention of actor Sylvia Milo during a visit to the Mozarthaus Museum in Vienna. Though a musician herself, Milo never knew there was another Mozart, one who, during the siblings’ childhood, was always given first billing and louder acclaim when father, Leopold Mozart, toured them through the courts and concert halls of Europe. This portrait sent Milo on a quest to find and give to this other Mozart a voice. Now Houstonians will hear that voice for the first time when Lott Entertainment Presents brings Milo’s one-woman play The Other Mozart to the MATCH for three performances in Jan 7-9.

I spoke with Milo before her trip to Texas, while she was still performing the show in New York. Before we discussed The Other Mozart, a project that turned the actress into a playwright, I had to ask how she went from musician to actor.

“I played electric violin with different bands in New York City,” she explained. “I didn’t quite know what to do with myself on stage when I didn’t play. When someone was soloing, I felt a little lost. I thought that I would take an acting class to figure out how you become more comfortable on stage.”

One acting class begat another, and she soon fell in love with the “transformational” quality of becoming a new character. And then in her quest to become Nannerl, she had to transform again into a playwright. Like her previous transformation, I couldn’t tell if this story was one of happenstance or perhaps some destiny’s call.

Milo did not at first set out to write The Other Mozart, though she certainly wanted to play Nannerl. She did years of research trying to discover this woman who had all but vanished from music history. The irony is that Milo came to know Nannerl from reading the letters of her brother and father to her. Nannerl and her mother kept many of the correspondences from the men in the family, but most of her own to her brother and father were discarded or lost along the way. 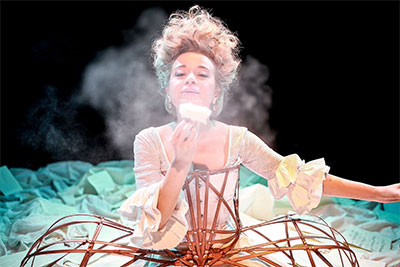 Once Milo had learned all she could about Nannerl, she brought a creative team together to tell the story, but she at first thought someone else would write the script. Getting further into the project, she realized that she had a “certain angle” on the story that only she could tell.

Marie Anna Mozart was a master of the harpsichord, but the play poses the question as to whether she was also a composer like her brother. There is evidence the answer is yes. She was taught composition at a young age by her father, and there is definite proof she continued to compose something as she grew older.

“We have that letter from Wolfgang where he praises her composition that she sent to him and he encourages her to write more,” Milo says.

Did she continue but her compositions have been lost or destroyed, or did the constraints of the time and her position in society keep the other Mozart from a life creating music?

Music is of course vital to The Other Mozart, but how does a show depict an absent of musical compositions, some we know definitely existed, along with the historic possibility of more now lost? The answer for the play’s composers Nathan Davis and Phyllis Chen was to attempt to create Nannerl’s “musical imagination with the sounds that she would be hearing but as an abstract world surrounding her.” Those sounds of her daily life, like the harpsichord, church bells, music boxes, women’s fans, and tea cups are woven into the performance.

The music of Wolfgang is also used to help establish the changing times and places of Nannerl’s life. Another, special composer is featured as well. 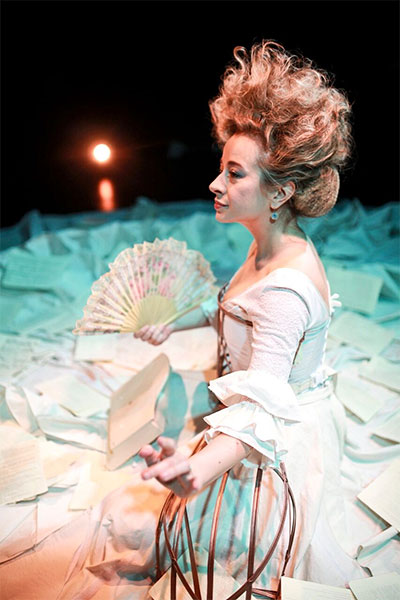 “Then we have a woman composer of the time, Marianna Martines, who is forgotten now, unfortunately. But she was a greater composer in Vienna and Mozart played with Martines and Nannerl met her. She’s an example of a woman who composed; however, she was from a different class and had different financial means to do that,” said Milo.

Partnering with the music is a set that primarily consists of a large dress that dominates the stage. This “cloud like” but heavy dress represents Nannerl’s world, limited by her gender and middle class placement in society along with the vastness of her “musical imagination.” When Nannerl inhabits the dress, Milo says she becomes kind of a “ghost” or “being from another world.”

Since it was the hair that first drew Milo’s attention to the forgotten Mozart in the portrait, and since she’s bringing the show to Texas, with our own proud tradition of strong women with really big hair, I had to ask her if she had any styling tips. Milo doesn’t use a wig to get into character and instead it takes over an hour to tower her own locks into Nannerl’s.

Her secret, modern instruments like a crimper, as well as a very old recipe for hair spray that’s part water, sugar and vodka, a concoction authentic to Mozart’s time.

With hair set, dress spread and music playing, Milo transforms, and Maria Anna Mozart takes the stage to give voice to her story.