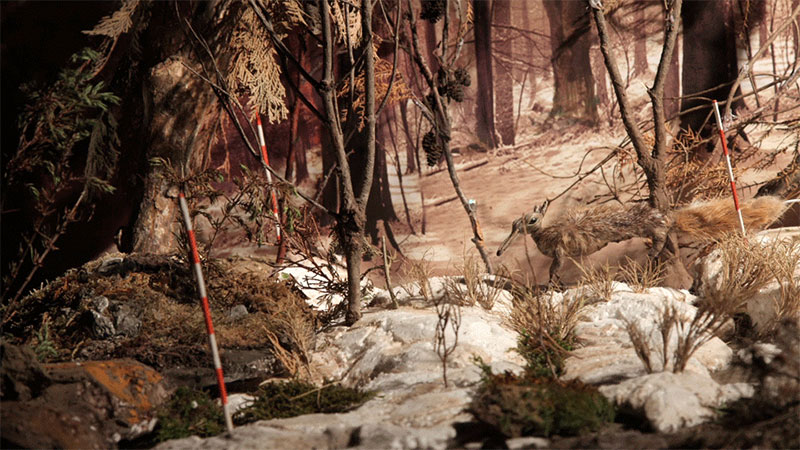 Big Things in Small Films: The Rush Process at Aurora

The Vast Landscape took top honors at the juried competition at the Rush Process at Aurora Picture Show on Aug. 26, 2016.

On Saturday Aug 27, walking out of the second night of Rush Process, a film festival highlighting handcrafted animation, my friend said, “it was v inspo,” which in millennial poetics, means “very inspiring.”

There are things that tear us apart, make us feel better about ourselves, make us want to take a selfie, “wow” us, or make us say “awesome,” but those things are not necessarily “inspo.” These feelings affect us, but do not necessarily draw us into the urge to bring things into the world. So “inspo,” or inspiring, is a world of its own. I try not use the word inspiring, so as to keep it somewhat sacred, because our overuse and abuse of it wears it out, but I will admit that these films are inspiring.

Rush Process, produced in collaboration with Aurora Picture Show, took place on Aug. 26-28 at Aurora and at the Waughford. This was its first year.

Festival Director, Dave Merson Hess, says, “With Rush Process, I wanted to explore and celebrate the place where handcrafted animation, independent, and artistic cinema overlap. Lo-fi and DIY are hard to define, but handcrafted animation is an existing tradition, it’s a movement of filmmakers embracing analog techniques. The choice to embrace physical media in an age where it is no longer a necessary part of an animation workflow, is an important one, and handcrafted is a space where very exciting, personal, and inspiring films are being made.”

In another interview, Hess says independent film “chooses the discomfort of honesty and doubt over audience-pandering via formula and cliché.”

“The discomfort of honesty and doubt.” I can’t think of a better term to describe the thread that runs through these films. Group shows are often bundled together by theme, medium, historical context, and other good and necessary likenesses, but these films are linked by a shared set of values.

Friday night was a juried competition of documentary and narrative films from all over the world. The juried narrative winner was The Vast Landscape. Impeccably crafted, flawless in form, it seems like a studio film, the sort of thing that wins festivals, and it does win festivals.

The audience award went to Astigmatismo, a film that used depth of field to explore sight and the lack of sight, letting us look through that lens, and become aware of how we are constantly shifting between the foreground and background, both physically and emotionally. This is a good place to state what I think the value of “hand-drawn” or “DIY” animation (or just “good art”) is: the materials, which in this case are “embraceable,” hold-in-your-hand physical materials, are specific to the intention of the work. Nothing is arbitrary. Astigmatismo looks at the functions of looking through a basic function of looking, our focus. It is essential. Nothing is expressed that could be expressed otherwise in any form other than the way it is.

More so than narrative (only because we are used to seeing narrative hand crafted animation) the handcrafted approach to “documentary” is immediately thought provoking. Like the best and most creative documentary films, it opens up possibilities about what a documentary is or can be. The documentary winner, Bernina Sings, blends a recorded audio story about sewing with a rich tapestry of sewing materials.

Over an old photograph, as the narrator describes her perfectionist mother, threads spread out from the mother like rays around Mary in medieval paintings. When she describes herself and her own tendencies away from this perfectionism, jagged threads embroider the space around her. Two simple symbols that worked 2,000 years ago still work today. There is a reason medieval paintings make sense to us: their non-realistic representation is not primitive, it says something significant. On top of textures made of textiles, tape measures weave their own tapestries. The meaning of text is literally “woven together.” I feel a powerful connection between the materials and the oral storytelling, which is text, because text does not just mean written down. And so the whole thing is “woven together.” If the piece is a quilt, the squares are different, and seamlessly stitched, and this is what we mean when we say something feels natural. I have a view that we are in a rut with true stories. We will soon exhaust ourselves (for those that are not already exhausted) with the once- interesting but now homogeneous form of NPR-podcast-wave true storytelling. I think films like this point to some ways out of the rut.

Saturday’s programming, Invisible Ink, was a varied selection of 16 shorts curated by OOF collective. These films illustrate what I think we should consider when we think about what makes something “creative.” Animation, or the general production of visual objects, coveted as “creative” within the “creative class and creative industries,” is not inherently creative.

Watching the films, I am thinking of “creativity” as the physical, intellectual, and emotional labor it takes to actually let things like these come from out of almost nothing, which is that exhausting, uncertain, and groundless space where our thoughts meet the world. The films are too wild to be preconceived. This work requires patience, presence, and an ability to withstand doubt and find faith in our selves, which requires space, something culture with its “creative class” could for the most part care less about. A wild, creative thing is not easily turned into a laptop advertisement. It’s a mostly thankless thing. A “real creative,” if there is such a thing, is probably better off quitting, but doesn’t, and that is courage.

Encountering the big creativity within these small films, I wonder about this group, imagining each individual filmmaker bent over the table carefully arranging the materials for hours and hours and hours, which to me seems impossible, noble, monastic. And it must feel hopeless at times, to labor alone with the diligence of 24 frames per second. People say that writing seems lonely, but I cannot comprehend being in this image of patience. So this festival, which is a brief moment of togetherness and thankfulness, is good, and is good for us. I hope to see it continue.

I did not attend the Improv Meets Animation Workshop, presented in collaboration with BETA Theater, at the Waughford on Sunday the 28th, but based on the resulting shorts you can view here it must have been fun. People must have felt inspired.

I leave you with The Bats, by Jim Trainor, a film we watched on Saturday. I keep watching it. It contains all the things I liked best about Rush Process, so I hope you enjoy it. A number of the films are available on Youtube and Vimeo, so just go to look through the program notes on the festival page and google them. Enjoy.