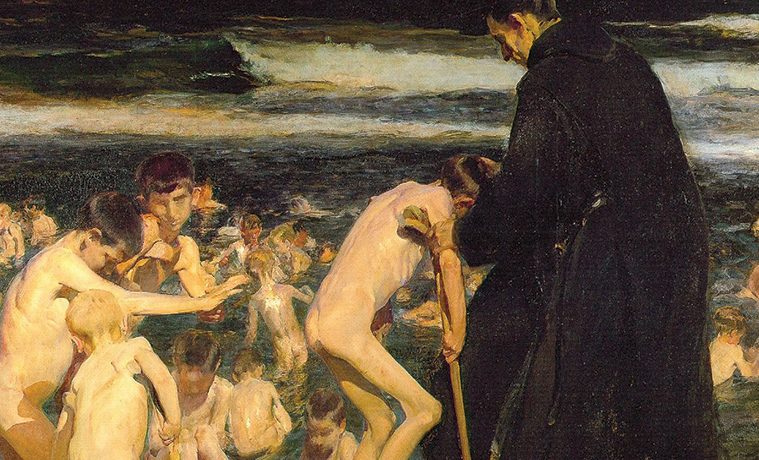 DALLAS—To get an idea of just how popular the Spanish painter Joaquín Sorolla y Bastida (1863-1923) was at the height of his fame in the United States, consider that the Dallas Museum of Art’s most popular exhibition to date, Tutankhamun and the Golden Age of the Pharaohs (2008-09), drew a whopping 2,925 visitors per day, according to The Art Newspaper. Then rewind 100 years to Sorolla’s 1909 blockbuster at New York’s Hispanic Society of America, which garnered 159,836 visitors in just one month; or 5,327 visits per day—nearly twice the daily turnout for the Boy King’s bling.

Comparing Sorolla with Monet, the critic and collector Duncan Phillips (1886-1966) captured the former’s appeal for American audiences. “Now Claude Monet painted sunlight so scientifically composed of solar beams that it made us hot around the collar, and dazzled our eyes,” Phillips wrote. “Yet he never made us feel, as I hope we all have felt on summer days, that this is the best of all possible worlds and that the golden sun is chiefly responsible for its being so nice. That is Sorolla’s sentiment. He is a lyric poet, one of the familiar kind who goes about singing.”

Sorolla’s reputation in the U.S. faded in the wake of Picasso, but Sorolla in America, an ambitious traveling exhibition at the Meadows Museum, revisits a moment when bravura brushwork and a knack for making a nice summer day sing were enough to make Sorolla the best internationally known Spanish painter—one collected by many American museums, a number of which lent works to the show. (María at La Granja, a 1907 portrait, was the first work to enter the collection of the San Diego Museum of Art—one of the show’s co-organizers—in 1925.) 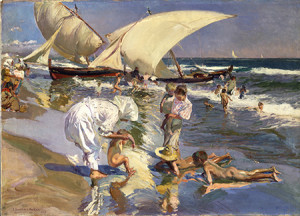 Sorolla made fine paintings—as well as his share of saccharine, overly mannered duds—in each genre, but the show’s heart and soul are the galleries devoted to his seascapes and beaches. (Sargent, with whom Sorolla exchanged gifts of small paintings or works on paper, was also a terrific marine painter.) Here, Sorolla’s gift for capturing light on wet, moving bodies—whether naked or covered in translucent fabric, as in After the Bath (1908); whether above or under water, as in The White Boat (1905)—joins forces with his lush, painterly brushwork to yield his most consistently pleasurable pictures.

One of his masterpieces, Running Along the Beach (1908), gets its own room, surrounded by five terrific charcoal, graphite and pastel preparatory drawings that showcase Sorolla’s gifts as a draftsman. Pay special attention to how Sorolla renders the reflections of the sprinting children’s feet and bathing dresses in the wet sand along the water’s edge with a few daringly coarse squiggles of paint that contrast with his delicate handling of the dresses themselves. At his best, Sorolla makes you sigh.

You sigh, too, at the glimpses the show offers of the Sorolla who might have been—a social realist who painted a young mother accused of infanticide being escorted by armed civil guard members to stand trial (Another Marguerite!, 1892) and a group of crippled and leprous children bathing at the beach with the assistance of a solitary priest (Sad Inheritance!, 1899). The latter painting, while announcing Sorolla’s gifts as a marine painter, also seems to anticipate George Bellows’s anonymous yet empathetic treatment of poor, young East River skinny-dippers in Forty-Two Kids (1907). 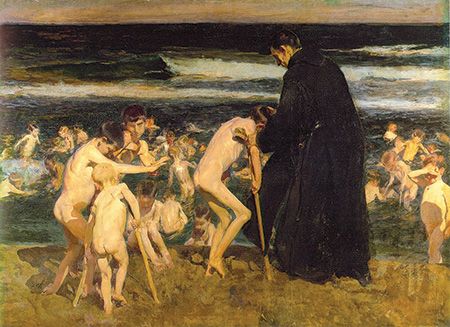 It also seems to have exhausted Sorolla, who called Sad Inheritance! “my nightmare and my fears” and resolved to stick to more upbeat subjects that betrayed no evidence of Spain’s declining fortunes. By 1909, William Merritt Chase would send his students to study Sorolla’s work at the first of two New York shows (the second was two years later). Having quarreled with Robert Henri over Henri’s “art for life’s sake” philosophy that seemed to be ascendant with the rise of the so-called Ashcan realists, “Chase saw Sorolla’s success as a point for his side,” writes catalogue contributor M. Elizabeth Boone.

Soon enough, it would all be moot; the 1913 Armory Show would make the Ashcan painters look as hopelessly old-hat as Chase and his acolytes. One might wish that guest curator Blanca Pons-Sorolla, the artist’s great-granddaughter, had edited out more of Sorolla’s weaker works and included a gallery with some of the contemporaneous American art New Yorkers were seeing around the time that Sorolla-mania was at its peak.

Highly enjoyable even without that additional context, Sorolla in America, which the Meadows co-organized with the San Diego Museum of Art and Fundación MAPFRE in Madrid, probably won’t revive his U.S. popularity to 1909 levels. Madrid may be a different story. A 2009 Sorolla survey at the Prado drew 4,820 daily visitors. Take that, Tut.