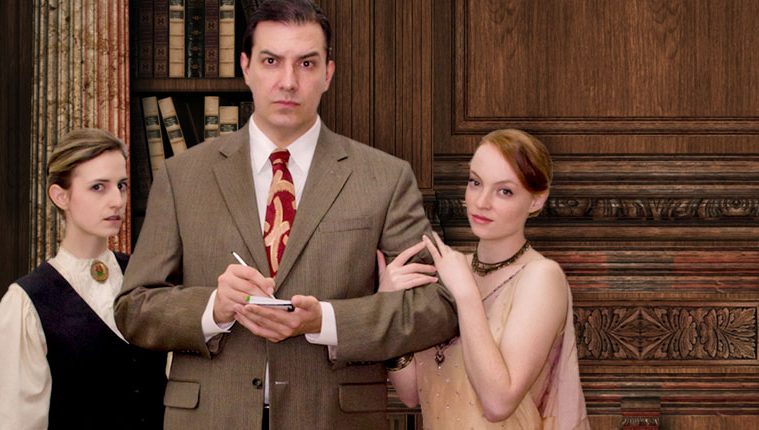 In the early days of the new millennium, while still a creative writing undergrad at University of Houston, Jennifer Decker fielded an unexpected request from one of her professors. This professor, she was told, was writing a play. And she seemed, just maybe, to know a few people who could help get it produced.

Looking back, Decker marvels at her own audacity, helping the avant garde play Kama Sutra by John Harvey find its way onto a small Houston stage in front of a small Houston audience. Maybe she should have known better than to do something so rash, but what came of it, in the end, is the theater company called Mildred’s Umbrella.

“The name comes from a poem by Gertrude Stein,” Decker explains helpfully about the name, which she and Harvey came up with about the time they needed a bank account. “John was teaching a class. He called me up to read it out of a textbook. The name is all about words, about making you see images rather than what it means. It fit our aesthetic, plus it just sounded good. And we figured there was a good chance no one else was using it.” She and Harvey were right about that.

As it turns out, the birth of Mildred’s Umbrella happened early in the sea change that carried Houston from a city with minimal interest in cutting-edge theater to a city with some small production of some “out there” show more weekends than not, many of them given in venues as quirky as abandoned churches, converted flower shops, coffeehouses and bars. The company performs its latest show, a “thinking person’s Gothic thriller” called Ravenscroft, May 3-18 at its new—and first permanent—home, Spring Street Studios.

Described by Decker as “a little more mainstream than some of our shows,” the funny-frightening script by Don Nigro tells of an inspector sent to an eerie mansion (where better?) to investigate a murder. His arrival propels him into the lives of not one or two but five dangerous women, each of whom clearly has something to hide. As they say about war, truth may be the first casualty.

“It was as though,” quips Decker, “someone got murdered at Downton Abbey, and Hercule Poirot came to solve it.”

For any fans who fear “mainstream” wherever they spot it lurking, there is no shortage of hope. Mildred’s 2013-14 season will feature an original collaboration called Rome by co-founder and resident playwright Harvey, developed over an entire year by company members along with musician Andy McWilliams and videographer Robert Thoth. In each of 11 performances in March 2014, with poet John Keats dying in the next room, a diverse group will talk about life, love and death — hopefully with a side order of lyrical poetry. Typical of both Harvey’s theatrical writing and of the company’s approach, there seem to be no limits on innovation, with music used as much as possible and videos of the work-in-process all over YouTube and the MU website.

In recent years, partly to spread its wings, partly to showcase its 20 or so members and, yes, partly to raise money (the budget has risen from $500 that first year to $50,000 today), Mildred’s Umbrella has has added some twists. There’s an annual festival called the Museum of Dysfunction that showcases 20 short plays culled from more than 200 submitted from all over the country. There’s a gala, called with theatrical tongue-in-chic Xanadu: Believe in Magic. And there’s a summer children’s theater and dance camp titled Under the Little Umbrella, conducted with Suchu Dance.

Part and parcel to all this growth has been finding a permanent home. Few local companies have performed in more places than Mildred’s Umbrella, venues as different as Theatre New West, Avant Garden, Barnevelder, DiverseWorks and Obsidian.  It became hard for the company to make plans when it never knew where it would be playing, let alone rehearsing or officing. Now, along with Stark Naked Theatre Co. (another group with big-time faith in local talent and local audiences), Mildred’s Umbrella is based at Studio 101, the versatile performance space created inside Spring Street Studios.

When she so chooses between producing, directing and sometimes acting and teaching English at HCC, Decker can recognize progress since that initial adventure with her professor under the title Kama Sutra. There have been 29 mainstage productions overall, including one world premiere, three regional premieres and five original pieces. There have been performances with lectures at U of H, five Fringe Festival shows, five Museum of Dysfunction showcases, plus collaborations with the Houston Center for Photography, the Houston Public Library, Bobbindoctrin Puppet Theatre, the University of Houston Honors College and even the Museum of Fine Arts.

One of Decker’s greatest satisfactions is seeing the growing sense of shared mission in the theater community, particularly among the smaller, always funding-challenged groups. Even though she’s no longer the new kid on this block, she sees her own early struggles in every question they ask her, every plea for guidance. Along with them, she fights to get more and better plays in front of larger and more-engaged audiences, challenging both sides of the stage lights to grow, to advance, to embrace a piece of the unknown. Mildred’s Umbrella, she understands, is only one name attached to a mission to transcend the hard work of any single company.

“It’s all about making theater more prominent in Houston,” Decker says. “I think it’s helping everybody.”