When gazing at a flower, you can appreciate the color and form of the petals, or you may glimpse the history of biological evolution and the way it’s been tailored by human intervention and aesthetics. You can see the past, and maybe even predict the future. Jennifer Steinkamp’s new digital work Eon, recently unveiled as part of the University of Texas Landmarks Collection and commissioned for Welch Hall, the university’s recently renovated science building, invokes these complex ideas not in the form of ephemeral petals, but in massive LED screens.

Eon is made of some 70,000 total images layered on top of one another for depth and looped into an animation that runs for a little over two minutes. While there are no distinctive “flowers” per se, the space Steinkamp has created is populated by strange plant-like forms bobbing in some kind of (possibly) primordial soup. There is a “flashing” layer that mimics lightning, meant to refer to energy or “some kind of force or creation.” Forms squirm and intertwine dynamically. The scale of the piece is monumental, like the epochs of time referred to in its title. Eon runs for thirty-seven feet along the wall of the atrium, and stretches nine feet high. Somehow it manages to evoke both a macro-view of the natural world, and a microscopic one. “I like to think our foremothers are bacteria,” Steinkamp says. “It’s a funny idea, but it’s true.” 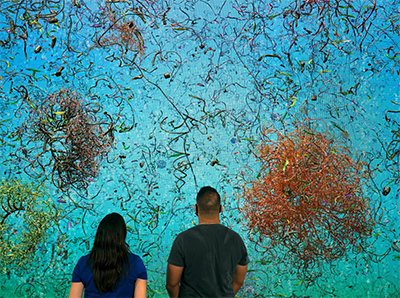 In the sophisticated software that Steinkamp uses to create her art, she can simulate and toy with the basics of physics. She sets the rules in the universe of each piece, and watches them play out in sometimes unexpected ways:

“Invisible forces have always been part of my interests,” she says. “ I am attracted to the physics of motion, water, wind, and gravity. The forces all around us, the sentience all around us, these move our senses. I sought to create life-like beings that are moved by their own desires and the forces all around them. It is a state where all life has sentience. Since our DNA comes from the symbiotic fusion of bacteria and single cell organisms, it seemed appropriate.”

The artist describes Eon as “an environment of opposing forces,” or a “speculation on a speculative model,” but all of this is built around a structure that is unapologetically beautiful. The piece enthralls with color and light, and its lush composition evokes a Rococo sensibility. “I like to consider the analogy of digital animated work a little more like a frieze than a painting,” she explains. “I see the frieze as more architectural, depicting a certain amount of depth through sculptural elements.” LED screens are especially suited to the kind of depth that heretofore could only be hinted at through low or high sculptural relief. “The thing I like about display screens is the brightness. They can exist in a room with light, or outdoors with sunlight.” Steinkamp says. “For my installation art, the architecture has always been an important element. Your physical, bodily relationship to the scale of the art in the space is part of the intention. I hope that people can understand this.” 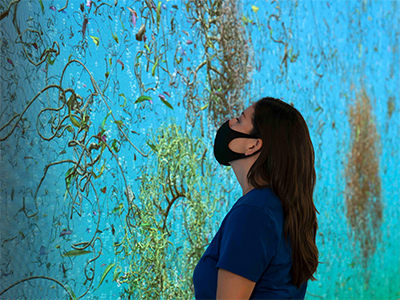 One major goal that the scientists who work in Welch Hall hoped to achieve through the building’s redesign was to “put science on display.” Many of the labs have glass walls facing passersby, so that the history undergrad, the literature MFA, and the visiting parent or administrator can have a glimpse into the work that scientists do. This is part of a larger and much-needed movement of labs in public institutions to become more public-facing.

Unfortunately, the evidence of misunderstanding or distrusting science is all too clear in the public discourse these days. We see it in the proliferation of the anti-vaccination movement and in the vilification of climate science. “When I was newer to art,” Steinkamp explains, “I always appreciated work that gave me an entry point.” Obtaining this kind of sensitivity to other fields is how we move from simple appreciation of a flower to understanding its biological and historical context. Eon works like a bridge between worlds, providing the scientifically-minded with a view into the artistic realm, and the artistically-minded a glimpse into the beauty of science.