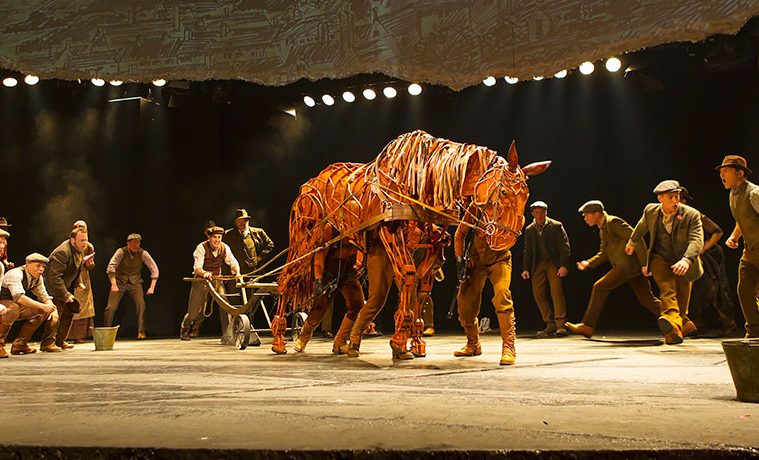 IMAGE ABOVE: Joey and the US National Tour of WAR HORSE.  Photos © Brinkhoff/Mögenburg. 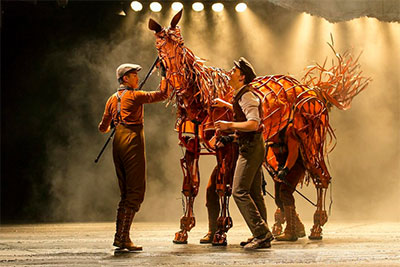 It goes without saying that teamwork is important for the puppeteers who operate Joey, the larger-than-life star of War Horse. “Relinquishing your ego” and “sacrificing your own ideas” are just two of the numerous challenges facing the three puppeteers, but overcoming those mental hurdles is what imbues War Horse with its undeniable magic. The show will be stopping in Austin May 6– May 11, and in Houston, May 27 – June 1.  The show will be presented by Lexus Broadway in Austin at Bass Concert Hall in Austin and by Gexa Energy Broadway at the Hobby Center.

War Horse is the award-winning play based on the book by Michael Morpurgo, which follows Albert, a young English boy and Joey, his beloved horse, through the travails of Europe during World War I. Albert’s father sells Joey to the cavalry and Albert, unwilling to let Joey go, enlists in the infantry, intent on reuniting with his best friend. 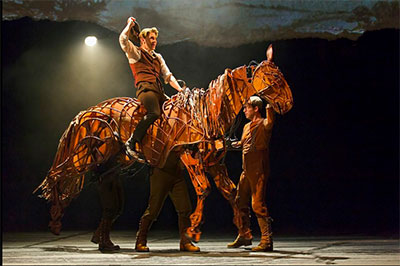 It’s a simple story but one which has captivated audiences around the world, thanks in large part to the show’s now-legendary puppets.

The play originated at England’s National Theater in 2007. Since then, Tom Morris’s vision of a stage play centered around the puppets of South Africa’s Handspring Puppet Company has been continuously playing to packed houses in London’s West End, as well as completing a successful two-year run on Broadway. It is currently traveling the United States on its second national tour.

The 27 puppets—from horses to geese, even a couple of humans—that appear on stage during the show were all designed by Handspring, the visionary puppet company based in Cape Town. Run by Adrian Kohler and Basil Jones, whose attention to detail has resulted in unbelievably lifelike creations, the puppets of Handspring are the result of years spent studying the movements of animals in order to bring their creations to life.

A focus on the puppet’s magic and complexity though, belies the fact that the large puppets are remarkably difficult to operate;  Joey requires nearly-perfect synchronicity from the three puppeteers responsible for his movements. 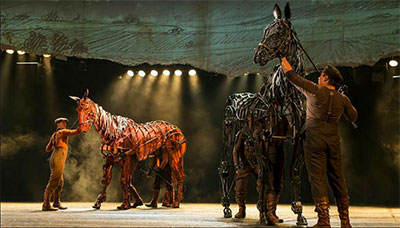 Riddleberger—the “Head”—stands outside of the horse in costume, although he is, for all intents and purposes, invisible. Among other things, Riddleberger is responsible for expressing the horses’s emotions. The pole he holds, which travels up inside of the neck of the horse, controls both the movement of the head but also, thanks to two brake levers, the horse’s ears, one of the horse’s most powerful emotional indicators. Behind Riddleberger are James, as the “Heart” and Manley as the “Hind.” Manley and James are both strapped into the same cage inside of the horse, which comprises the structure of the body. James is responsible for manipulating the free-floating front legs; when his knees bend, the horse’s front half rises and lowers. Manley controls the two back legs as well as the horse’s other emotional “tell”, his tail.

The three puppeteers make it sound easy, but when three actors are forced to remain in perfect sync for several hours a night in close quarters and (for Manley and James) in the dark, the challenges are not trivial.

Physically the show is demanding, thanks to repetitive use of the same muscles inside the horse, but the show is also mentally taxing;  the need to constantly re-investigate the choices being made concerning the horse’s movements is central to the process that brings Joey to life each night. 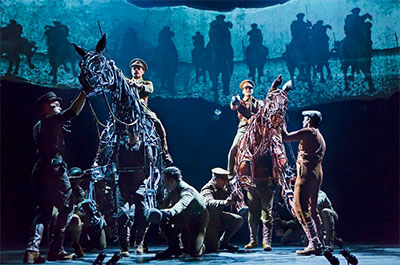 According to James, Joey’s realism is a result of many things. Handspring spent  many years studying horse-movements in order to develop a puppet which would truly come to life; but there is also the synthesis of the knowledge and experience of all of the puppeteers and actors who have operated the puppets over time, who have devoted themselves to translating their understanding of the horse’s movement into a language of sorts.

Still, War Horse is not just about the puppets. “War Horse allows us to revisit a terribly difficult time in our history through another set of eyes,” says James. The play also coaxes us, as humans, to experience and empathize with animals and their experiences of reality.

The human and puppet stars of War Horse, apart from being incredibly fun to watch,allow us to think about ourselves and our collective history in an entirely new way. Perhaps the experience of two creatures willing to sacrifice everything to be together—an impulse so simple and pure—is the perfect lens through which to examine the first World War in all its violence and incomprehensibility.