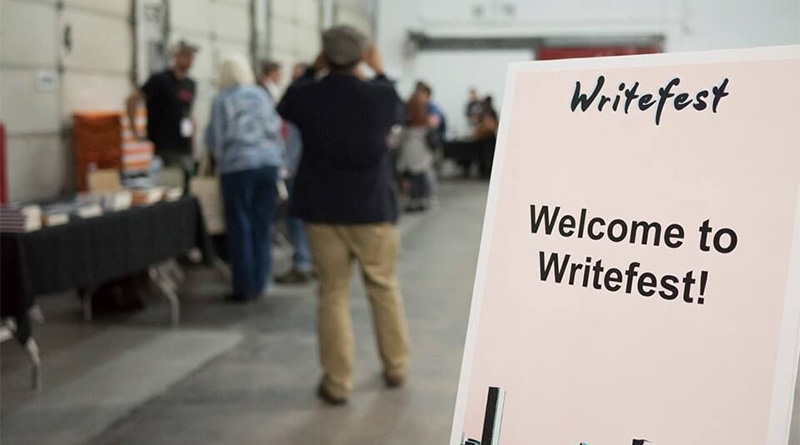 Building a Community of Writers and Readers: WriteFest Returns to Silver Street Studios

Nonprofit literary organizers draw all sorts of volunteers, but Elizabeth White-Olsen, executive director of Writespace, recalls one in particular. “We had a young lawyer show up, and she looked like a supermodel, in her miniskirt, cute silk blouse, high heels. She didn’t have time to change after work. I watched her in this outfit, moving furniture all day. I thought it was the funniest thing. That’s the kind of volunteer we have—so committed.”

Not all volunteers are impressively coifed lawyers doing unexpected grunt work, but it takes all types to pull off Writefest. Houston’s newest literary festival, and one of the few in the country dedicated entirely to literary journals and their editors. Organized by Writespace, and now in its second year, Writefest takes place from March 6 through 12, with an array of author readings around Houston in different locations, including Brasil, Holler Brewing Company, and Brazos Bookstore (where, full disclosure, I am the general manager).

But the bulk of Writefest’s programming takes place on Writespace’s home turf, the Silver Street Studios. There, writers can take week-long workshops and participate in the Lit Journal Fair on Saturday, March 11; this fair is free and open to the public, with panels, keynote speakers, and, of course, lots of literary journals on display, including local heavyweights like Gulf Coast and Glass Mountain, and farther-flung publications like Booth and Clarkesworld, the latter an acclaimed science fiction journal.

This mix of genres is what, White-Olsen hopes, helps distinguish Writespace in general and Writefest in particular. White-Olsen aims her grassroots organization toward beginner writers (for now), putting them in front of literary journal editors to take an important step into publication. And she believes all genres are equal—not only highfalutin literary writing, but also sci-fi and fantasy.

Writespace is primarily the work of three people: White-Olsen, Holly Walrath (marketing coordinator), and Layla Al-Bedawi (events coordinator, and Writefest’s de facto literary director). All are writers who have published short works across genres and are enthusiastic and supportive in person and on social media. When White-Olsen started Writespace alone in 2014, she couldn’t imagine the talent that would show up to help her. “I learned, this is not just my project,” she says. “Isn’t meant to be, and shouldn’t be.” Walrath and Al-Bedawi gave the organization “greater purpose and mission than what I’d envisioned.”

The core purpose remains, though: to support writers—in particular, people just starting out. “The odds are against so many writers,” White-Olsen acknowledges, but she thinks that taking writers seriously—which Writespace aims to do through workshops, write-ins, panels, and literary festivals like Writefest—is something of major importance. She remembers being taken seriously by her own mother, an English teacher, and also by writing instructors who pushed her to revise her work over and over again. When she realized just how many unpaid hours she’d put into writing—in short, how dauntingly hard it is—she wanted to create a space to offer support.

White-Olsen speaks of Writespace as an organization that’s full of passion, but in some ways, it seems like it’s still trying to find its footing. Its key inspiration is Inprint, Houston’s longtime literary nonprofit, which hosts major authors and sold-out workshops (among countless other programs) each year, and if even Writespace doesn’t yet have Inprint’s longevity, acclaim, and influence, it doesn’t lack ambition.

Embarking on Writefest last year, White-Olsen felt a little scared—worried about growing too fast—but she believes “in doing things that seem impossible. I’m fueled by that. If you take on a boring goal you know you can accomplish, it’s not going to be any fun.” As she has brought new creative people into her orbit to help make Writespace successful, she has taken on a more administrative role than before, trying to provide a structure in which huge undertakings help to grow the organization, not to overextend and cripple it. Hearing her talk about this, I can’t help but think of the writing process itself, often an effort to find structures that contain and streamline ideas.

Writespace’s very location—in Houston’s booming warehouse district—amplifies her notion of growth. Silver Street Studios is one of many art spaces that have enlivened a previously dormant district. (Hell, some high profile Super Bowl parties were just held more or less next door.) “When people think of Houston,” White-Olsen says, “they think of industry, oil, gas, concrete. They might drive through and see that, but in these warehouses is art.”

Silver Street Studios, in particular, is a warehouse that now gives a home to many artists’ studios. Thus, Writespace lives in a landscape with interesting collaborative opportunities. Much of the artwork that decorates the Writespace office has been given to the organization by neighboring artists in exchange for other services: manuscript consultations, artist statement-writing lessons, etc. Walking through this space with White-Olsen, I witness her speaking with the artists next door, brainstorming ways to get them involved with Writefest. And they all seem engaged and willing.

I come back to the idea of the lawyer in her high heels, volunteering to move furniture. It takes a willingness to say yes to pull something like Writespace off—and also a willingness to cede control to the value of the unexpected. When White-Olsen began her organization, she was doing everything. Since then, she has come to realize her own limitations—and to embrace them. “My own weaknesses make room for other people,” she says. “It’s why we’re doing well.” She thinks for a moment, then laughs. “Because I’m not good at things, it makes room for other people’s strengths.”