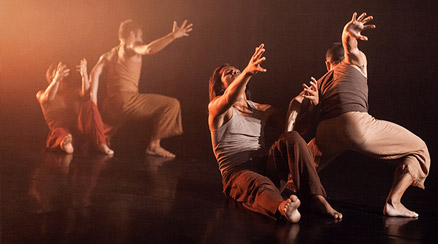 Buoyancy in the Shadows

Spitting Ether: A Reality Bending Dance, created in collaboration by NobleMotion Dance and lighting designer David J. Deveau, is an evening of light and dance, yes, but perhaps the strongest element of the show is shadow. As such, it’s a show that might leave an audience in a liminal place, peering into the darkness to see more. It’s an imaginative and exciting place to be.

This is the third time I’ve reviewed NobleMotion for Dance Source Houston, fourth if you count their 2009 Houston debut at the Big Range Dance Festival. Spitting Ether is, easily, their most thoughtfully and emotionally dense work so far. It is a piece better suited to conversation than review. There are ideas and feelings, I’m sure, that could be teased out between friends during an after-show exchange.

But given the task at hand—a review—I’ll begin visually. NobleMotion is always strong on visual style. From the bluster of KinkyKool Fan Blowing Hard to the simplicity of Lone Lark Speaking to last year’s collaboration with the late light artist, Jeremy Choate, there have always been strong images to take away from a NobleMotion show.

That is definitely true for Spitting Ether. Starting with the recurring, grounding appearance of people insurgical masks and scrubs, we’re given the framing device of someone in mortal, medical peril. From there, we’re taken on a journey of light and shadows.

Early in the evening, we’re introduced to a light source that is worn in the palm of the dancers’ hands. Eventually, we’re shown an extended section of choreography wherein the cast is lit only by these devices. They create trails and arcs of light as they move. We never see any of the dancers’ bodies in full during this sequence and the fact that their torsos are clothed in black—only their legs, arms, and heads are uncovered—increases the invisibility of the dancers. Depending upon your disposition, I suppose this inability to see the dancers might be frustrating, but I would submit that the dancers were showing us how much we can’t see, maybe how much we can’t know.

This is a show where acting matters. When the light comes to a standstill and a face enters the light, the expression on the face becomes an important conveyor of emotional information. I was struck by the effectiveness of these moments.

There are six sections to the evening, which segue one into the next so seamlessly that you’re not always sure exactly when each transition occurred. It doesn’t matter. I was engaged at every turn, wondering, for example, what a solo dancer surrounded by three cameras on slanted tripods might mean. Cameras and photos capture memories. When the dancer is left clutching one tripod as the other two are taken away, is she clinging to memories that are slipping away? What might it mean, in the context of exploring the edges between life and death, to see a projection of black and white static turn the dancers into ghostly images, the entire stage into a TV screen with bad reception?

I don’t want to lead too much with my interpretations of these images. You still have the opportunity to see this show. I do want to mention the effects of the final section. Light projected toward the audience, combined with some bursts from a fog machine, created the illusion of a long tunnel with solid walls. As the dancers entered the light, the effect is, in fact, ethereal. The light looks as if it is miles away instead of the few yards’ depth of the Barnevelder stage.

This being a dance show, I’m aware I’ve spoken little of the actual dancing. Andy Noble and Dionne SparkmanNoble, the company’s artistic directors and primary choreographers, have given us dances that alternate between their signature athletic style and quieter, more subtle moments. Within Houston’s world of contemporary dance, these are among the best dancers the community has to offer. Suffice to say, the dancing is topnotch.

Also, lest you think a show exploring life and afterlife to be heavy and dark—I may have led you to think so given all my talk of shadows—let me also say the overall effect of the evening is a buoyancy, not quite lightness (no pun intended) but of a weight that is carried, lifted by a current that will bear you safely to your destination.

As I said at the beginning, this is not a show for me to tell you about. It’s a show for conversation. I recommend finding a good friend, going together to one of the remaining performances, and then, afterward, go to some late night coffee house or all night diner. I’m betting you will have a lot to talk about.

-NEIL ELLIS ORTS
Neil Ellis Orts is a Houston based writer and performer. He’s looking forward to a fall full of performance work. A short essay of his appears in the newly published collection, Letters to My Bully and is beginning to shop around a novella for publication.